By Lindsay Vallen and Jacob Gore

JACKSON, Wyo. — 2020 was hard. There are no ifs, ands, or buts about it. From a global pandemic to a contentious election, and every other “dumpster fire” in between, 2020 will go down as the year everyone hated, besides anyone who’s ever made a funny meme. 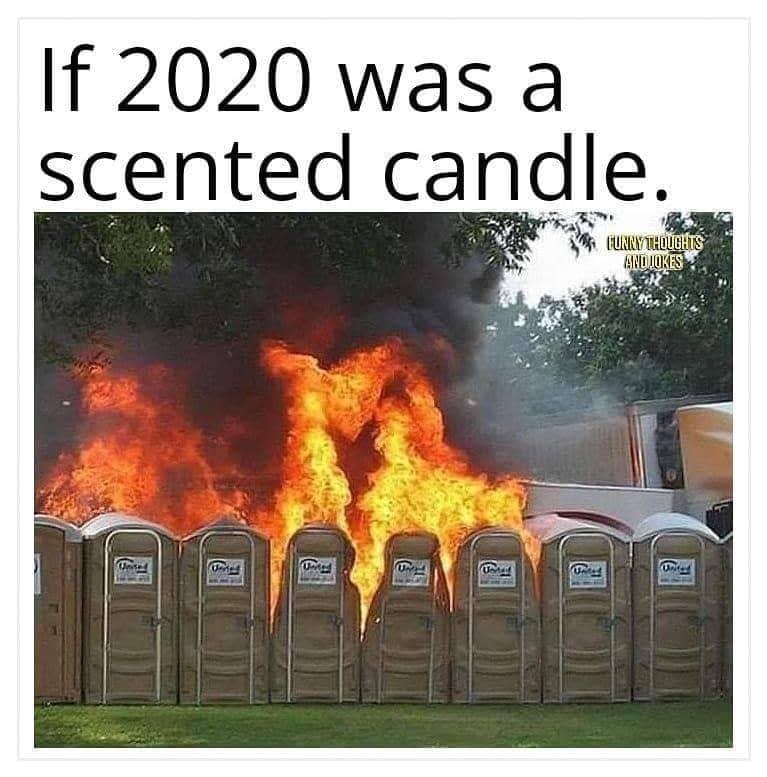 There’s no question that 2020 has been a difficult year full of hardships. But often during tough times, we discover our true strength and perseverence. 2020 has also been a year where friends, family, and neighbors came together in a united front and supported one another during these challenging times. Also, a GTNP biologist rescued a baby duckling and that gave us all the feels.

The world will wake up in a new year tomorrow, January 1. Before then, Buckrail took a moment to reflect on some of this year’s biggest stories. Journey with us:

COVID-19: The Virus That Changed Everything

One of the most notable downs to 2020, continuing on for who knows how long, is the Coronavirus, or COVID-19.

The virus first appeared in China, and slowly stretched into domestic territories, eventually making its way to Jackson Hole in the second half of March.

This prompted many closures as officials on all levels worked hard on how best to adapt to the new reality.

First, it was the toilet paper and hand sanitizer. Sales skyrocketed when it was realized that this virus was here to stay.

Then mask-wearing and social distancing became the new norm. Teton County was notably the first county in Wyoming to pass a mask mandate back in July. A few counties followed suit, but the difficulty of enforcing the mask orders remains difficult, as Section E of the order states that non-mask wearers do not need to provide medical proof that they are exempt from wearing a mask.

After months into the pandemic, one of Buckrail’s own reporters, Jacob Gore, tested positive for the virus. He reflected upon the experience in his first-hand account, “The Covid Diaries, a first-hand account of contracting the virus.” Jacob shared with the Jackson community the unpleasant details of his symptoms and noted how a healthy young adult, like himself, could still experience the worst parts of the virus.

In early December, the state of Wyoming decided to pass a statewide mask order. The order was created at a time where positive COVID cases were peaking statewide.

Shortly after the state health orders were enacted, the first vaccines made their way into the ultra-cold freezers at St. John’s Health. Among the first to receive the vaccines were nurses, doctors, and other frontline workers who are often nearby positive COVID patients.

Throughout the pandemic, Buckrail has kept the community updated with our COVID case dashboard, along with a page listing resources to help those financially affected by the virus. These pages will continue to be updated throughout 2021.

After much of the US was quarantining during the wet spring season, many were excited to get outside and recreate, where chances of spreading or contracting COVID are much lower. This urge to get outside led to record visitation in the national parks and monuments of Wyoming.

Despite spring closures in response to the virus, Grand Teton (GTNP) and Yellowstone National Parks (YNP) both saw a record number of visitors during several months in 2020.

With and a higher number of visitors, but limited lodging in the parks, the town of Jackson saw its highest occupancy rate ever recorded for summer and fall. Straw polls conducted by the Jackson Hole Chamber of Commerce indicated that more people are visiting the small mountain town and that off-seasons are getting shorter and shorter.

GTNP was so full later in the summer that park rangers were sent out to encourage responsible recreation and parking at popular areas like Jenny and String Lakes. Data from the National Park Service shows that more people were out hiking and camping this summer, as campgrounds around the valley were often filling up early in the day.

Not only were Wyoming’s national parks seeing record numbers this year, but state parks around Wyoming broke several records for the number of visitors as well.

In other park news, Yellowstone’s Canary Spring went dormant, while the spectacular Giantess Geyser came back to life for the first time in 6 and a half years.

With consideration from Wyoming state officials, GTNP decided to continue culling off non-native mountain goats in the park. However, this time, they brought in volunteers to hunt the goats, rather than shooting them from a helicopter which was originally intended.

When observing wildlife, it is easy to forget about things like a global pandemic, or police brutality protests outlined by the orange haze of devastating forest fires happening in the west.

Wildlife reminds us that sometimes it’s all about being in the here and now. Watching a wild animal in its own habitat, adjusting nearly every move towards survival, provides a raw perspective on how easy we humans actually have it. Take this bear dragging down a bison in Yellowstone National Park, for example. Have you ever put so much effort into prepping your meal?

Another bear hit the spotlight in Yellowstone this year after he took down an elk in the Yellowstone River. Following the takedown, the bear sat on the carcass guarding it against wolves and other scavengers like ravens and coyotes. This was a spectacle that many visitors to the park witnessed, as the bear posted up with his kill close to a main road in Yellowstone.

World-renowned grizzly bear 399 also had quite the terrific 2020. Back in the spring, the famous sow emerged from her den with four, yes four, cubs at her hip. Everybody was astonished by the news, drawing thousands of photographers out into Grand Teton National Park to capture images of the famous family. In fact, Grizzly 399 is known as the most photographed bear in the world, she even has her own Facebook and Instagram page!

Eventually, in November, the family meandered south along the Tetons and were spotted in unlikely areas around the Village Road, and even further south near homes in Raferty J.

Biologists said that 399 was looking for food sources, particularly easy food sources to feed her and four additional bellies. Residents of the area were warned not to leave out any human food sources for the bears. Unfortunately, the bear family destroyed a bee colony, as well as getting into some animal feed and other sources.

Finally, 399 and her four little ones meandered back into GTNP, where many thought they were cuddled up in a cozy hibernation until spring.

But 399 decided to carry out one more surprise for 2020. She and the squad were spotted days before Christmas roaming around in Grand Teton National Park. It’s difficult to know exactly why the family hasn’t hibernated yet, but many presume that the bears are seeking out elk gut piles left throughout the park by hunters. After all, feeding yourself and four hungry apex predators is not an easy task.

It is anyone’s best guess as to when they will go into hibernation.

Whether by voting-by-mail, early in-person voting, or during the 12-hour election day window, the electorate turned out in droves for the 2020 election, amidst the backdrop of the worldwide COVID-19 pandemic.

On the ballot in November was the controversial 7th cent tax also known as the “General Penny”. If passed, the sales tax in Teton County would have increased from 6 cents to 7 cents. The community voted down the tax, by a 7,401 (53%) to 6,546 (47%) margin. The town and county estimated the tax would have brought in an additional $7 million per year in revenue.

Two seats were open on the Jackson Town Council this election cycle, with a field of newcomers, and Mayor Muldoon vying for a council seat. The two open seats went to Jim Rooks and Jessica Sell Chambers. Missing the cut were Devon Viehman, 3rd top vote-getter, and Mayor Pete Muldoon at the bottom of the four-candidate field.

The Board of County Commission saw no change. Both incumbents—Natalia D. Macker and Greg Epstein—held their seats. Behind them, the race was close between Peter Long and Christian Beckwith.

Mayor Pete Muldoon took his name out of the running for mayor, choosing instead to run for a seat on the town council. Hailey Morton Levinson will be that new Jackson mayor. She easily outpacing challenger Michael Kudar, who launched a write-in campaign in the primary to get his name on the ballot in the general election.

Teton County continued to be a blue dot in a sea of red in the national elections.

President Donald Trump and Vice President Mike Pence won the state of Wyoming along with three electoral votes. The last time Wyoming chose a democrat was Lyndon Johnson in 1964.

Incumbent Liz Cheney (R) beat out Lynnette Grey Bull (D) winning back her seat in the House of Representatives. This will be Cheney’s third term.

Despite losing in Wyoming, Joe Biden won the 2020 Presidential election, announced on Nov. 7. His running mate, Kamala Harris will be the first female Vice President to hold office in the United States. According to the Associated Press, Biden and Harris received 81, 283, 485 votes and 306 electoral votes compared to Trump’s 74,223,744 votes and 232 electoral votes. The 2020 general election had the highest voter turnout in history.

Biden and Harris will be sworn in on Jan. 20, 2021. President Donald Trump has yet to concede. He has begun a campaign on Twitter to discredit the results, calling the election a fraud, an unsubstantiated claim.

Taking it to the Streets

2020 was a year of racial reckoning and polarizing politics. Nationally and locally, 2020 was a year when Americans exercised their first amendment rights.

In March, local youth organizers made their voices heard, participating in the United States Youth Climate Strike. Participants did not attend school on Friday, March 15, instead they protested, contacted representatives, and rallied for government action concerning the environment.

Protests broke out nationwide and locally in Teton County following the death of George Floyd, a black man who died after a Minneapolis police officer kneeled on his neck for 8 minutes and 4 seconds on May 25. Floyd’s death, and the disproportionate killing of black men and women at the hands of police, has reignited the Black Lives Matter movement nationwide.

The Black Lives Matter protests also began calling on governments to defund the police, citing overfunding and police brutality. Teton County Board of County Commissioners allocated $10,000 to be spent on an independent task force to assess how the community defines public safety.

In September, a group gathered at the Jackson Town Square, rallying in support of police, following a national outcry against police brutality and calls to defund the police.

In November, election results were celebrated at the Jackson Town Square, with Biden Harris supporters gathering in celebration.

On a lighter note, a hidden treasure chest worth more than $1 million was found somewhere in Wyoming, and quite likely in Yellowstone. The chest was hidden by Forrest Fenn, a famed art and antiquities collector who created the treasure hunt more than a decade ago. Sadly, Fenn passed away before any exact location was revealed, but he did confirm it was in Wyoming before he died. He had visited Yellowstone many times in his life, which is why many treasure hunters concluded that the chest was likely hidden in the park.

*Phew.* That’s just a snapshot of what happened this year in the Jackson area and beyond (it was a lot). Bring it on, 2021…we’re ready for ya!