WYOMING – With 102 highway fatalities in 2019 already, Wyoming is experiencing another bad year for deaths by vehicle accident.

A new study by Esurance pegged Wyoming as the 2nd most dangerous state to drive in based on data from National Highway Traffic Safety Administration during 2013-2017. 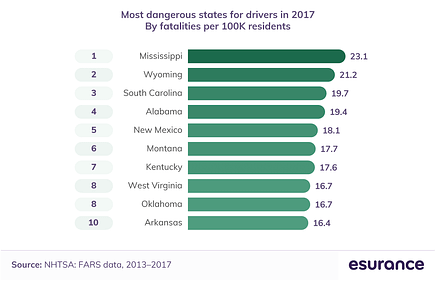 Highway fatalities are on the rise nationwide—up 13% over the same five-year period. Wyoming was trending on a more positive note until this year. Wyoming had 66 fatalities by August 8, 2016 and 64 by this same time in 2018. But 91 in 2017 and the current 99 are indications more needs to be done to make the Cowboy State safer to drive in.

Contrary to what many might anticipate, it is not traffic-jammed states like California and New York that lead the way in highway deaths. Rural states like Wyoming and Montana are much more likely to have higher casualties as a result of accidents. This jibes with research from Insurance Institute for Highway Safety (IIHS) that suggests rural roads tend to be more dangerous than urban ones.

Wyoming was second in a state-by-state ranking of fatalities per 100,000 residents with 21.2. Mississippi led the way with 23.1. South Carolina, Alabama New Mexico, and Montana rounded out the top 6.

According to the study’s authors at Esurance, higher fatalities in rural states can be attributed to a few things.

In some rural places, just a few police officers are tasked with patrolling miles of varied terrain. In top-ranked Mississippi, for example, police sometimes struggle to monitor the state’s patchwork of rural roads. As a result, drunk and distracted driving, along with other driving violations, are common.

In city centers, speed is often limited to just 45 miles per hour. But with fewer obstacles and drivers, limits outside the city are much higher. Take second-ranked Wyoming, for example. With a speed limit of 80 miles per hour on many of the state’s rural roads, residents can quickly find themselves in life-threatening circumstances.

In the absence of street lamps or traffic lights, it can be difficult to see what’s coming your way on rural roads. Additionally, you run a greater risk of coming across livestock or wild animals on the road.

Rural roads might have unpaved surfaces, massive potholes, and uneven terrain. And in many cases, there’s not much of a shoulder to pull over onto.