JACKSON, Wyo. — WYOmericana alludes to roots-inspired Wyoming Americana—a regional music genre and collective of songwriter based acts performing Equality State-harvested songs. After several rounds of twists and turns in what has become a year-long planning process, the 6th iteration of the WYOmericana Caravan Tour will land at the Silver Dollar Showroom this Thursday. The triple concert bill will feature Pinedale-based songwriter Jason Tyler Burton, Laramie-based Shawn Hess with fiddler Jackson Clarendon, and local quartet Aaron Davis & the Mystery Machine out of Hoback.

Jackson-based band Screen Door Porch founded the WYOmericana Caravan in 2013, rotating lineups each year and acting to “propel Wyoming’s original music scene as an artist collective.” Ad-libbed, cross-band collaborations and epic encore sets featuring all musicians on stage simultaneously have hatched powerful vibes that musicians and audiences have come to cherish. That debut tour in 2013 was a boon. The New York Times sent a writer to document seventeen shows in eighteen days and published the full-page article, “Touring, the ‘Wyoming Way.’” The tour was subsequently named Top Arts/Entertainment Event of 2013 by Casper Star-Tribune and in 2014, the short film WYOMERICANA debuted on the big screen at the Cheyenne International Film Festival and took home first place at The Laramie Film Festival.

A new partnership with the Wyoming Arts Council was established for 2020. Last October, dozens of acts from around the state applied by submitting original music and touring history. Acts were announced in November, and an extensive tour was originally planned for May/June through the Rocky Mountain region. That tour was scrapped due to COVID-19 restrictions and partially rescheduled for six performances this fall, predominantly in historic Wyoming theaters. The lineup for the Silver Dollar Showroom’s “Sit Down Get Down” series will feature longtime characters from the Wyoming music scene. 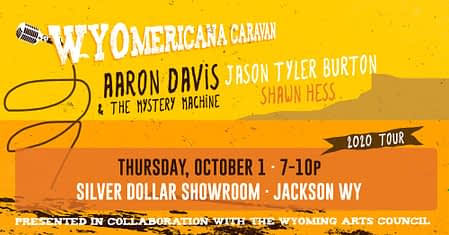 Jason Tyler Burton writes songs for rural people and rural communities. He is careful with the places and people he writes about, telling complicated truths in straightforward folk story telling. His album, Kentuckian (2019), was voted #1 Album of 2019 by Wyoming Public Radio listeners and Burton uses his upbringing in the Bluegrass State as the setting for stories that deal in universal themes. The album has been called “working class country roots from a gifted songwriter” (Americana UK), “a combination of Jason Isbell and Bob Dylan” (If It’s Too Loud) and “music paired with the songwriting is nothing short of an artistic masterpiece” (The Oklahoma Reviews).

Shawn Hess crawled out of a western noir film and into your heart with songs that stand firmly with one foot in the oldest roots of western music and folk and the other in a modern sensibility for narrative and rhyme. His debut solo album, World Away (2019), was explained as “treasures like this…a pretty broken-hearted collection of songs for sure, but still so damn enjoyable…excellent country songwriting” (One Chord or Another). Hess is known over the last decade in the Laramie area as a member of Beatgrass, Elk Tongue, 10 Cent Stranger, and his new project The Country Skillet.

Aaron Davis is an unconventional fingerstyle multi-instrumentalist, vocalist, and studio engineer that was awarded a Performing Arts Music Fellowship from the National Endowment of the Arts in 2020, “a merit-based honor of excellence in an artist’s field.” From “searing slide guitar” (Country Weekly) echoing gritty Southern blues à la Duane Allman, to a patchwork of story folk and acoustic roots, pensive alt-country, and improvisational 70s-influenced rock, Aaron has been described as a “truly phenomenal songwriter” (Americana UK) with “a particularly interesting approach that mixes poetry, groove and roughness” (Lonestar Time). The texture whizzes of his touring brotherhood, The Mystery Machine, alternates drummers Jason Baggett and Liam O’Neill with 3-part harmony sung by bassist David Bundy and pianist/organist/trombonist Mike Patton, combining for a dynamic stage show and the foundation of Davis’ ninth album, The Meander.