WyoHackathon brought together some 400 of the brightest young minds and progressive-thinking developers in the world.

WYOMING – The country is still buzzing a month after the first-ever WyoHackathon in September. The ‘think space’ clash bash of innovation and technology was a geek’s paradise as computer ‘hackers’ gathered to strut their stuff in front of world-renowned mentors and developers. 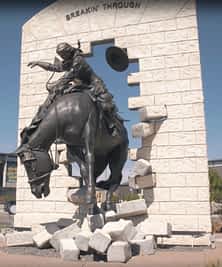 Following groundbreaking legislation that included five trail-blazing blockchain bills during its 2018 legislative session, the state of Wyoming has stuck a flag in the ground as an emerging global hub for all that is blockchain. The recent 2018 WyoHackathon Breakin’ Through, taking place September 7-9 at the University of Wyoming was evidence that the country is taking notice.

“When I told my friends I was coming out to Wyoming for a hackathon—that they are the hub for innovations building here—they didn’t believe me,” said participant Grace Lee who is CEO of her own company Wishpoints. “They didn’t realize how much was building over here, how much legislation was here, how many experts are here.”

Event organizers out up thousands in prize money for teams of programmers and developers that could meet certain challenges including things like coming up with the best new, executable idea using blockchain to benefit Wyomingites; or creating a better virtual wallet; or designing the best dApp for event ticketing, for instance.

Prizes were icing on the cake. Most code-writers came for the contacts and collaboration.

“I could never Google the information I was able to get here,” said UW student and participant Roshan Kumar.

Caitlin Long, co-founder of Wyoming Blockchain Coalition, and the event cosponsor is herself a Wyoming native. She grew up in Laramie and is a UW grad. Long called organizing the event a labor of love.

“It’s a win-win for my two passions—Wyoming and blockchain,” she said.

Wyoming has a rich history of Breakin’ Through and a long record of being first. The first woman to vote in the US, the first female governor, the first national park, and the first LLC law. And now the state has blazed a trail in blockchain, becoming the first elected body to recognize utility tokens as a new form of property that is neither securities nor money under Wyoming law.