What Wyoming may have looked like about 56 million years ago.

JACKSON HOLE, WYO – Wyoming is world famous for its extensive fossil records. Various dinosaurs, for example, died here and left us with abundant oil and gas plays after their anaerobic decomposition.

But why did all these animals live here in Wyoming? Did they prefer a colder climate?

Actually, flora and fauna thrived in Wyoming some 56 million years ago precisely because it was not typically cold Wyoming. In fact, it looked a lot more like modern-day Florida complete with palm trees and alligators.

The Paleocene and Eocene (66-34 million years ago) periods were times of numerous rapid and extreme warming events. These hothouse intervals known as ‘hyperthermals’ were series of transient greenhouse warming events caused by the release of carbon into the atmosphere that increased both temperatures and precipitation. 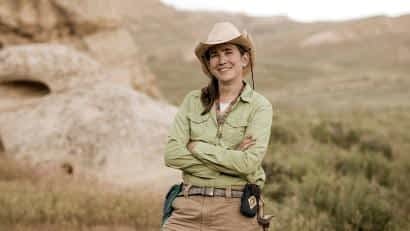 Ellen Currano, Assistant Professor of Botany and Geology & Geophysics with University of Wyoming, will share what she has learned studying the Bighorn Basin in particular.

During the PETM, carbon dioxide levels at least doubled, causing, in part, a temperature increase by about 8oF in the Bighorn Basin. There was a nearly complete change in vegetation, according to an observable increase in the diversity of insect herbivore damage traces observed on fossil leaves, and an increase in the amount of leaf area consumed by insect herbivores.

Currano’s results demonstrate that ecosystem change scales with the magnitude of change to the carbon cycle and temperature. Because anthropogenic CO2 release is 10-100x faster than that during the PETM, ecosystem change is likely to be even more drastic than that observed 56 million years ago.