When captured, animals are collared, released on site, and monitored in accordance with strict guidelines developed jointly by the WGFD and the Interagency Grizzly Bear Study Team. Photo: WGFD

LANDER, Wyoming — As part of ongoing efforts to monitor the population of grizzly bears in the Greater Yellowstone Ecosystem, the Wyoming Game and Fish Department (WGFD) will conduct grizzly bear capture operations in areas of northwest Wyoming beginning this spring and continuing through early fall, according to an announcement from WGFD. 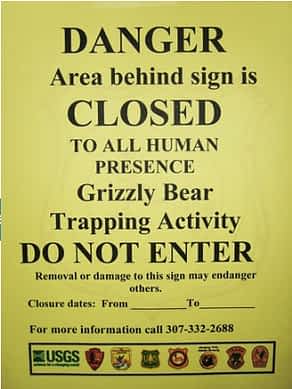 All areas where trapping is being conducted will have major access points marked with warning signs. All trap sites will be posted with area closure signs in the direct vicinity of trap sites.

According to WGFD, when captured, animals are collared, released on site, and monitored in accordance with strict guidelines developed jointly by the WGFD and the Interagency Grizzly Bear Study Team.

The annual monitoring of this population is vital to the ongoing management and conservation of grizzly bears in Wyoming, says the department.  Information obtained through these efforts is used to assess the status and health of grizzly bears in the ecosystem and provides insight into population dynamics critical to demonstrate the continued recovery of the Greater Yellowstone population.