In the back hall of Laura Modena’s Pilates studio, Align Pilates, is a print of the celestial northern sky. It was a Christmas gift, but her studio was its perfect home. 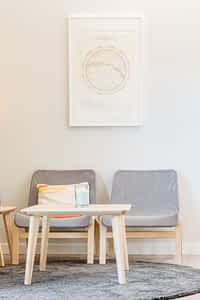 “Everything just worked. We decided the stars had aligned, so we just went with it,” Modena said.

And so in May of 2017, the studio, and the name Align Pilates, came to life. Modena was in her second trimester of pregnancy, but she wouldn’t let it stop her. “It’s the best decision we’ve ever made,” she said.

The entendre of the name, of course, is that Pilates also focuses on physical alignment. Modena specializes in working with injured clients after they’ve completed physical therapy. Her goal? To get them back their normal physical lives.

But she adds that Pilates isn’t just for the skiers and extreme athletes.  It’s also for “those who just want to rehab and get back to their day-to-day routines where they feel GOOD again,” Modena said.

“That’s what’s so cool about Pilates, you can take whatever injury you have and work with it in here to find your own balances.”

Modena understands this personally. She found Pilates after a car accident broke her knee when she was 16.“I fell in love because it was the one thing that made me feel good,” she said. Modena’s vision for her studio is as a small, boutique-style space where every client feels like they’re getting one-on-one attention and instruction. She and her instructors offer private, semi-private and group class sessions on a variety of equipment: reformers, Wunda chairs, a Cadillac/trapeze table, and an Avalon chair, as well as props to complement the practice.

All of Align’s instructors come from different backgrounds and bring different methodologies to their practice, which means they’re always learning from each other. It also means there’s always room for clients to branch out.

Pilates, Modena says, is fundamentally different from other forms of exercise athletes are familiar with. There are no big, explosive movements, no unbearably heavy weights. Instead, the practice happens in a series of controlled, subtle movements to encourage stability and increase range of motion. The movements focus more on body alignment and precision of movements so that your body is working efficiently and harmoniously. Of course, it does come with a solid abdominal burn. But the movements require intense focus and a mind-body connection. The idea, Modena says, is to re-center the body so it can be its most effective when it’s moving outside the studio.

Pilates, Modena said, offers people “an opportunity to find their center and control in their respective sports,” or just their everyday lives. “It’s hard to get people out of the mindset of always go-go-going, instead of taking it down a notch to really listen to your body and know what it needs.”

Learn more about the studio and check out the schedule on their website https://alignjh.com/