JACKSON, Wyo. — Wildfire smoke has become an issue in Jackson Hole and Northwest Wyoming earlier than usual this summer. Widespread drought and extreme early summer heat have contributed to an early start to fire season across the Northwest and Northern Rockies.

Jackson Hole first began to experience smoke last Thursday and Friday with fires in Central Idaho initially being the main driver. Over the weekend, the smoke became thicker and air quality worsened as smoke from fires in Idaho, Oregon and Northern California all contributed.

In fact, the Bootleg Fire in Southern Oregon has become the main culprit over the past couple of days. This fire has exhibited extreme growth over the past few days and has already burned 153,000 acres.

Typically, wildfires of this magnitude do not occur in the Northwest U.S. until later in the summer. The fact that massive wildfires are already occurring prior to the halfway point in July is a worrisome trend for what could be ahead later in the summer, both locally and throughout the West.

Widespread Heat and Drought Across the Western U.S.

Given the conditions in recent weeks and months, the early start to fire and smoke season perhaps isn’t surprising.

Nearly the entire Western U.S. outside of Colorado’s Front Range is currently experiencing a drought or at the very least “abnormally dry” conditions.

Locally, the Jackson Hole Valley is now under a Severe Drought (Level 2 out of 4) and the Teton Mountains are under a Moderate Drought (Level 1 out of 4). Farther west and south, conditions are much worse. The late June Pacific Northwest heatwave has contributed to rapidly developing drought conditions in this region. 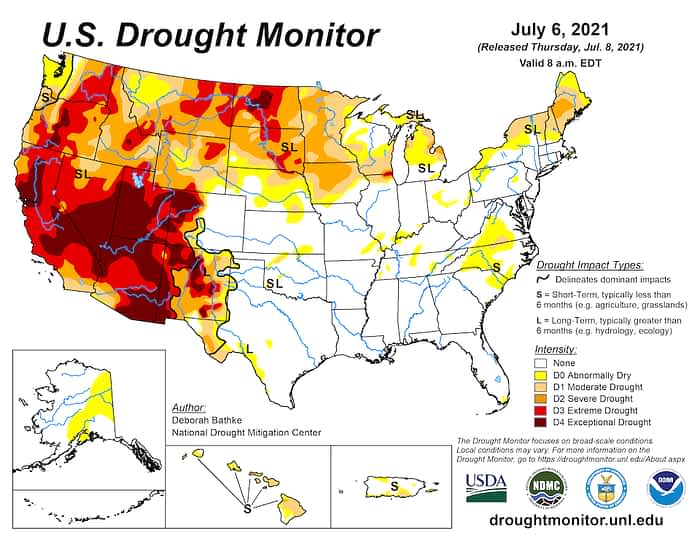 Abnormally hot temperatures in June resulted in higher evaporation rates and rapidly drying fuels across the West. Take a look at NOAA’s temperature percentile ranks for June 2021. The dark red spots indicate locations that experienced their hottest June on record dating back to 1895 and cover an incredibly large area.

Currently, most of the fire activity in the West is occurring from Northern California to British Columbia and east into Idaho and Western Montana. Farther south, the onset of the North American Monsoon has led to a decrease in fire activity across the Four Corners states.

Worsening Fire and Smoke Seasons in the West

Wildfire smoke has become more prevalent in Jackson Hole and across the Western U.S. in recent summers and that trend is expected to continue in the future.

A warming climate is resulting in higher rates of evapotranspiration and drier vegetation conditions across the Western U.S. during the summer months, setting the stage for environments that are more “ripe” for fire ignitions compared to previous decades.

In addition, summer precipitation has trended drier across the Northwest and Northern Rockies during the same timeframe comparisons.

Smoke conditions change on a day-by-day and week-by-week basis and are dependent on many factors such as prevailing wind direction aloft, precipitation, current fire behavior of ongoing fires and the timing and location of new fire starts.

There will be breaks in the smoke off and on throughout the summer as weather patterns undergo short-term changes. However, given that we’re still in the early stages of wildfire season and there are already numerous large fires, we are likely going to see periodic smoke issues for the next couple of months until the first cool/wet systems of the fall arrive.

The fact that many of the large fires are occurring in areas that typically see very little summer rainfall, such as Northern California and Southern/Central Oregon, doesn’t help either.

Also, there have not been any significant fires that have ignited in Northwest Wyoming yet, but we are certainly in danger of that happening the later we get in the summer.

As for the short-term, there actually is some good news ahead. First, we have to get through the upcoming week, which is likely going to feature lots of smoke and only some minor breaks depending on thunderstorm activity and location and temporary wind shifts.

Over the weekend, winds aloft are projected to shift from westerly to south/southwesterly, and this could end up pushing most of the fire smoke north of Jackson – possibly beginning as early as Saturday, but more likely occurring on Sunday.

The caveat is that this assumes no new fires ignite to the south or southwest of Jackson between now and then, which could change this outlook.

Next week, there is also hope for a break in the smoke pattern. A south/southwest flow is expected to continue, and a surge of monsoonal moisture is also expected to arrive from the south and possibly stick around for a bit.

This setup would result in increasing humidity, increasing thunderstorm activity and wetting rains occurring with thunderstorms. This would be a good pattern both for reducing smoke and at least temporarily reducing fire danger, although lightning-triggered fires still would be possible depending on the timing of lightning with rainfall.

Let’s keep our fingers crossed that the weather models are on to something and that we at least get a temporary respite from the smoke issues next week – and perhaps some needed moisture.

While many focus on the hazy skies and lack of beautiful mountain views as the biggest downside of wildfire smoke, the air quality issues are what we should be the most concerned about.

PurpleAir.com is a great resource to monitor current air quality levels with several air quality sensors located in and near Jackson Hole that update continuously.

Also, refer to the chart below for the Air Quality Index value ranges and the recommended precautions for specific values.

Studies in recent years have shown that those who are exposed to poor air quality due to wildfire over an extended period of time can develop health and lung issues. Strenuous exercise when the air quality is poor only compounds these issues due to higher breathing rates, so choose your outdoor activities wisely and try to limit strenuous exercise for when the AQI is 100 or less.