JACKSON, Wyo. — The first significant winter storm of the season remains on track for Jackson Hole this weekend, with record cold temperatures to follow. The National Weather Service in Riverton has issued a Winter Storm Warning for the Teton and Gros Ventre Mountains from midnight Friday night through midnight Saturday night, and a Winter Weather Advisory for the Jackson Hole Valley covering the same time period. 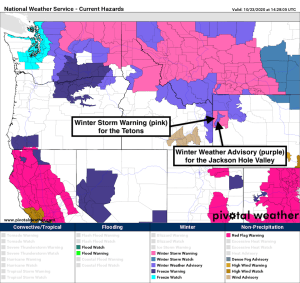 Partly cloudy skies can be expected on Friday with highs warming up into the low 40s in the valley following a chilly start. Light snow and rain will then arrive on Friday night, giving way to heavier and more widespread precipitation from Saturday morning through Saturday afternoon.

This will be a heavy snow event for the mountains with 7-14 inches of snow expected for the Tetons (mainly above 8,000 feet). Travel conditions will be difficult at times over the passes, as well as in Yellowstone. 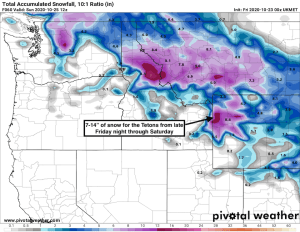 The Jackson Hole Valley and the town of Jackson will be right on the borderline between rain or snow for much of this event with all-snow expected above 6,5000 feet. However, a cold front will arrive on Saturday afternoon and we will eventually see a change-over to all-snow in the town of Jackson with a heavier burst of two of snow likely.

Valley snow accumulations should range from a dusting to 2 inches around the town of Jackson and south (mainly in the late afternoon once the cold front arrives), while higher elevation valley areas north and west of town should see 2-5 inches total. If temperatures end up being colder than expected, then valley amounts could end up being higher than forecast.

Snow will come to an end on Saturday evening and a surge of unseasonably cold air will arrive in its wake. On Sunday, highs will only be in the 20s in the valley — more like January than October! Then record cold is on the way for Sunday night/Monday morning.

Amazingly enough, another cold record is in jeopardy on Monday morning, and that is the all-time record low for the month of October which was set… just last year! On October 30, 2019 the low temperature fell to -6 in Jackson, which was the coldest October temperature on record. Currently, our forecast calls for a low of -6 on Monday, so there is a reasonable chance we could tie or even break last year’s record. 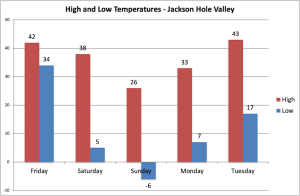 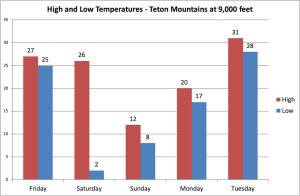 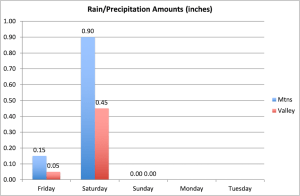 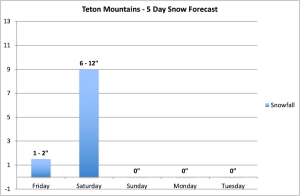