JACKSON HOLE, WYO — While the rest of town was digging out from record-breaking snowfall this winter, Jackson-based artist, Bland Hoke, was busy conceptualizing his latest public art experiment.

Hoke’s Moonshot concept quickly made its way to Oona Doherty, Creative Initiatives Director at Center for the Arts. At the time, Oona was searching for new ways to activate Town Enclosure pavilion (Carney Logan Burke Architects and Jackson Hole Public Art) in The Center Park in the wintertime, and Bland’s concept was an ideal fit for the location.

Within a few weeks, Doherty commissioned Hoke and his design team—Lewis Smirl and Lucas Ayoub—to create a site-specific snow art installation in the park and on the roof of the facility.

“The snow designs are a conversation between the designers with The Center Campus, a playful way to interact with the space and draw attention to the campus in a spontaneous, surprising, and temporary way,” Doherty remarked.

Timing was an important element in the project given the extreme winter weather conditions. Nevertheless, the design team adapted quickly to the ever-changing snowpack and nonstop snowfall.

“When the snowpack changed from powder to a dense crust layer, we decided to take advantage of this material to make larger shadows using vertical elements,” Hoke noted. “We decided to extend the Town Enclosure outwards. For the final experiment, we are excited to work with some other folks to execute an idea that requires participants to transform the snow canvas.”

The SnowCircles project evolved daily and even hourly at times, much like a science experiment.

Smirl commented, “I love working with snow art because it’s a different way to interface with the copious resource that we get to ‘enjoy’ for six-plus months of the year. It is a great exercise in communication working with other artists, and being able to start with an idea and morph the end design to accommodate the different snow conditions, or shadow lines, or angle of the sun.” 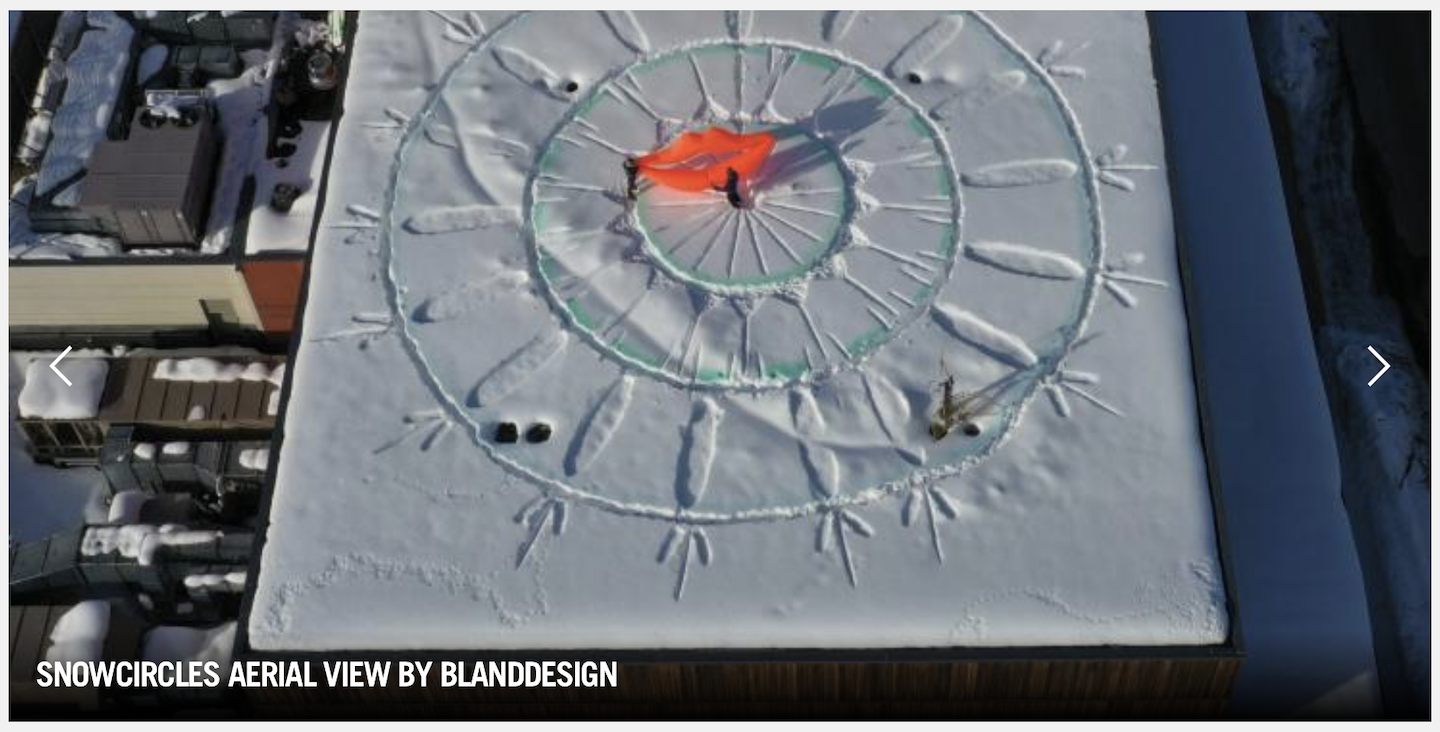 Filmographer Lucas Ayoub documented the entire artistic process with his drone knowing that the artwork would likely disappear overnight as the next big storm front rolled in.

“Drone access for filmography has reshaped our ability to share stories, and in the case of SnowCircles, preserve the tapestry,” Ayoub said.

Hoke’s vision for SnowCircles brought new life into both Town Enclosure and the surrounding park, which have been blanketed in snow since mid-November.

“As a community building exercise, SnowCircles offers a lot of opportunities, with people walking by and being curious, to folks stumbling on the art later and realizing that there is some intention and creativity behind what might look like destruction or random tracks is fun,” Smirl added.

Starting in mid-April, Ayoub’s drone video documentation of the SnowCircles project will be on view in The Center Theater Gallery.