JACKSON HOLE, WYO – Just six days before the Spring Equinox and seasonal weather to boot, the annual Fly Fishing Film Tour (F3T) brings stoke to regional anglers and industry professionals this Wednesday at the Center for the Arts.

In its twelve year, the all-ages F3T is the original and preeminent exhibition of fly fishing cinema making its way to over 175 cities. WorldCast Anglers, Orvis and Jackson Hole WILD bring the tour to us this year. 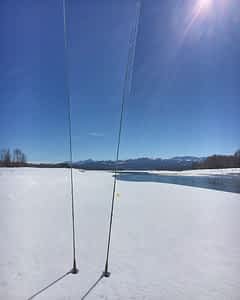 The lineup of short films on this year’s tour include “The African Tiger” about the ferocious alpha predator, “Atlanticus” wanders Mexico to catch tarpon on foot, “Dubai on the Fly” shows the unexpected side of the modern city, “Landsick” strikes the balance between gigging and fishing, while “Beyond the Horizon” tells the personal story of how fly fishing led a Honduran man to escape the life of drug running.

Jackson Hole Fly Fishing Film Tour starts at 7 p.m. Wednesday at the Center Theater. Tickets are $15/advance or $20/day-of. There will be a pre-event reception with beer, wine and raffle prizes at 6 p.m. and the total run time of films will be about 2 and a half hours. The first 50 ticket holders in the door will receive a free Scientific Anglers Fly Line.