VICTOR, Ida. — Cancel any other plans, Teton Valley. There’s only one place to be on July 15. Trust us, you’ll want to be able to say “I saw Jackie Venson when…” (maybe, after local favorites Inland Isle opened for her at Music on Main!)

A singer-songwriter and guitarist from Austin, Texas, Jackie Venson is known for her sizzling guitar skills and equally has impressive vocal chops. A graduate of the Berklee College of Music, Venson has ignited the Austin music scene with memorable performances at Live in Texas, Austin City Limits, NPR’s Live Sessions, and more.

Her music bends genres, falling somewhere between R&B, rock, and soul, with a variety of other dynamic sounds thrown in the mix. She was also the first Black artist to win the coveted “Best Guitarist” title at the Austin Music Awards. And when you hear her play, you’ll surely know why. Her skills on the guitar are undeniable, and her style leans on her Texas roots.

“I play the guitar—Texas and guitars go hand in hand like Idaho and potatoes,” she told Daniel Corey of Guitar Girl Magazine in September 2020. “Throw a rock in Texas, and you’ll hit a guitar player better than most you’ve ever heard, guaranteed. I think growing up in this state, as well as Austin, is what subliminally made me choose to switch to the electric guitar.

The Austin American Statesman called her an “…astonishing mix of raw soul, superb musicianship and laid back grace…” while Forbes Magazine said “Jackie Venson is truly an Austin legend in the making.”

Although she went to college to study piano, she switched to the guitar the last year after seeing a fellow student play the instrument with ease and excitement. Jackie says her father, a notable professional Austin musician, is her biggest musical influence and inspiration. Her sound has been compared to other Austin notables like Gary Clark Jr., and her smoky, powerful voice echoes the stylings of Amy Winehouse and Joss Stone.

Venson performs backed by a three-piece band. On her solo sets, she adds a depth and layered experience with expertise on the loop pedal. She has recorded three studio albums and an additional three live albums, all to stellar reviews. And characteristic to her unique style, she also has released two albums as her DJ alter ego: Jackie the robot, a psychedelic remix of her songs with an emphasis on electronic stylings.

Don’t miss a stellar opening performance from Inland Isle at 6 p.m. Get there early and enjoy food and beverages from your favorite local vendors! 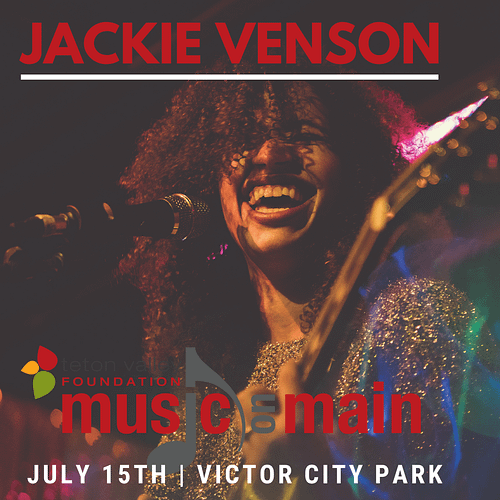