JACKSON HOLE, WYO – Town staff presented two pieces of antiquated municipal code for clean up and updating at Monday’s town council meeting. In many ways it was busy as usual—the kind of mind numbing work of government that few ever see and fewer ever care to. Then again, every once in a while, an exception to the rule comes along. Like last night, when the town council got lewd, disorderly and ill.

After hearing the attorney’s announcement that the town was officially seeking to repeal a pair of 102-year-old ordinances from its books that defined disorderly houses and houses of ill fame, councilman Jim Stanford expressed his disappointment in not being privy to the original content.

“I would enjoy reading the language from 1926. I would have liked in the staff report to at least have seen the sections talking about what constituted a house of ill repute,” Stanford said.

“I can tell you right now. I can read it,” town attorney Audrey Cohen-Davis offered. “It’s actually really funny.”

“She has to read it in olde English,” Don Frank cracked.

For the record, the ordinance ratified on December 23, 1914—the year the town was incorporated and presumably one of its first orders of business—concerning dance houses in Jackson read as follows:

“Any person keeping a dance house within the limits of the Town where lewd or disorderly persons assemble together for the purpose of dancing, shall, upon conviction thereof, be fined in any sum as provided in Section 1.12.010 of this code.”

Town manager Bob McLaurin added that it was just a few years ago the town repealed an ordinance that prohibited female bartenders. It wasn’t that the law was concerned with women serving alcohol; it actually mirrored an ancient state statute disallowing women from even being within five feet of a bar.

The second ordinance repealing disorderly houses and houses of ill fame originally read: “If any person is guilty of keeping or maintaining or is an inmate of, or in any way connected with, or in any way contributes to the support of any disorderly house, or house of ill fame, or place for the practice of fornication, or knowingly or willfully owns, or is interested as landlord or proprietor of any such house within the corporate limits of the Town, every such person is guilty of a misdemeanor.”

Just before a vote was taken to pass the repeal on first reading, Stanford again took the opportunity to quip, “Will the mayor regale us with his version of ‘House of the Rising Sun’?” Mayor Pete Muldoon fronts a band in his other life. 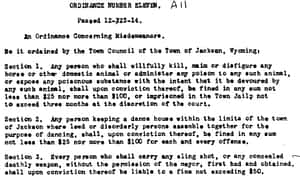