JACKSON, Wyo. — So far, January has been quite dry in Jackson Hole other than the first few days of the month. Last week, the Tetons experienced a major wind event on Wednesday, January 13 with wet/dense snow falling, while the Jackson Hole valley received mostly rain.

Despite receiving up to 9 inches of new snow up high during this storm, the wind, high moisture content, warm temperatures and low elevation rain left snow conditions in overall worse shape for winter recreation. A weaker storm arrived on Sunday night, but only 2-3 inches of snow fell up high.

Snow depth in the mountains relative to average continues to decrease. As of January 18, snowpack at Jackson Hole Mountain Resort’s Rendezvous Bowl (61 inches) and Grand Targhee’s Snotel station (69 inches) were both 87% of historical averages, or 13% below average.

After the Tetons received heavy snowfall (above average) in November, snowfall has been below average in December and so far in January.

Here is the snowpack graph from OpenSnow.com showing snowpack over the course of the year relative to average at Jackson Hole Mountain Resort. 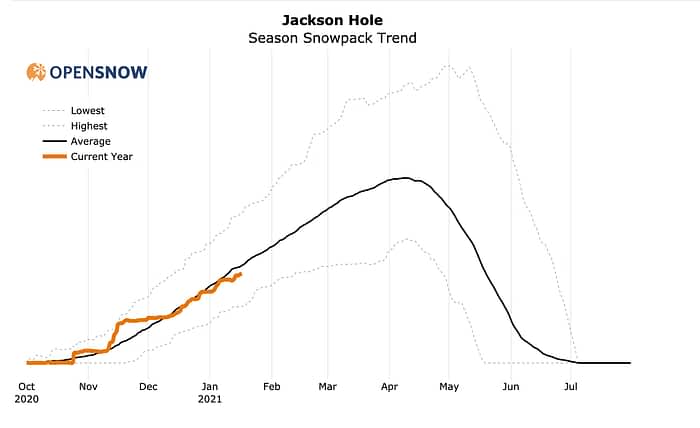 Snowpack is also below average in the Jackson Hole Valley, and last week’s rain event didn’t help. As of January 18, the settled snow depth in the Town of Jackson is only 6 inches, compared to the average value for the date of 12 inches – in other words, only 50% of average.

Outlook for the rest of January

The pattern is becoming active across the West, but it will take some time before Jackson Hole really sees any of the benefits. Snow chances will return late this week and again early next week, but confidence is low regarding how much snow we see.

The first storm system arriving late in the week will favor Utah and Colorado more than Wyoming, but we should see enough moisture arriving from the south/southwest to at least pick up some snow from Thursday night through Saturday.

This system is quite complex, and whether or not Jackson Hole sees light snow or something more remains in question.

Another storm is projected in about a week from now, but once again, confidence is poor regarding the storm track and behavior. It’s possible this storm could also dive south into the Great Basin and Southern Rockies with the Tetons seeing more of a borderline “glancing blow scenario.”

Both of the mentioned storms are taking slow, meandering paths across the Western U.S., which are always difficult to forecast in advance compared to more progressive storms when the jet stream is tracking near or just south of the Tetons.

Looking farther out, a relatively active pattern should continue through the end of January and into early February with more frequent snow chances than what we have seen recently. Whether or not we can make up our snowpack deficit remains in question, but at the very least, skiing conditions should improve.