STAR VALLEY, WYO – Bridger-Teton National Forest officials today announced a decision to harvest dead and dying trees in a portion of the Greys River Ranger District; work that is expected to begin this year.

The decision to allow work on the 250-acre Tri-Basin salvage project has been signed, and work is expected to begin this year on the Bridger-Teton NF. The project area is on the Greys River Ranger District, within the Wyoming Range, near the headwaters of the Greys River, adjacent to Forest Service Roads (FR) 10171, 10387, and 10126, approximately 40-miles southeast of Afton, Wyoming.

“The commercial harvest of timber stands would focus on the salvage harvest of lodgepole pine and mixed Engelmann spruce stands, of which the mountain pine beetle has infested and caused mortality of 60% to 70% of the pine’s single-story, even-aged stand,” stated District Ranger Justin Laycock in the Forest Service Decision Memo. “The Engelmann spruce stands also have a developing mortality due to the larval boring of the spruce beetle and increased defoliation by western spruce budworm on stands of Engelmann spruce, subalpine fir, and Douglas fir.”

The purpose of the Tri-Basin Salvage Harvest Project is to harvest dead and dying trees to recover the existing economic value. Additionally, this project will improve Forest stands by the promotion of age-class diversity among the trees, the reduction of stand density, and the promotion of Forest growth.

Another benefit of this salvage project is the reduction of available fuel loads, which if left alone, could lead to high intensity, and severe wildfires, which can lead to soil armoring and acute erosion during storm and runoff events.

While no new roads will be constructed, other benefits include the maintenance and reconstruction of existing roads within the project area to address the developing issue of erosion and sedimentation of the surface water resources.

The project is near a spawning area for the Snake River cutthroat trout. These actions will promote the growth of healthy riparian vegetation, thereby providing protection to the existing hydrologic, geomorphic, and water quality character present in the Tri-Basin area. 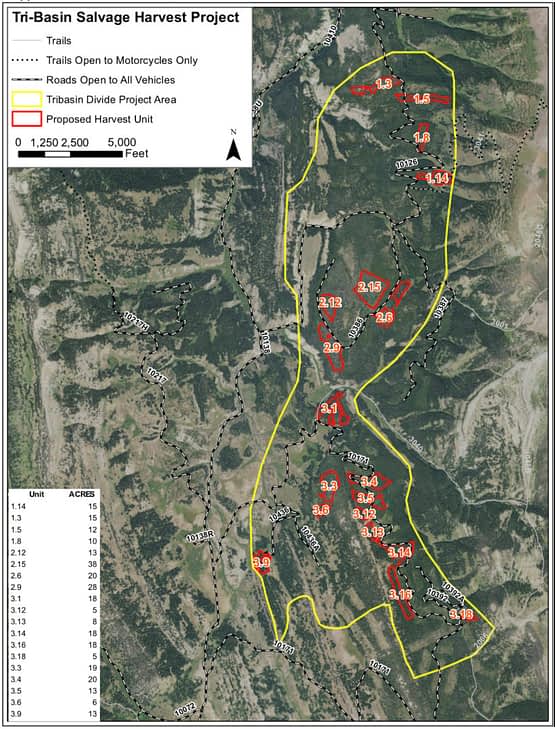