JACKSON, Wyo. – Jackson Hole Mountain and the Teton Range have experienced some big winters in recent years. Snowfall at JHMR’s Rendezvous Bowl Plot (elevation 9,580 feet) between October 1 and March 31 has exceeded 450 inches during each of the previous five winters, compared to a long-term average of 391 inches.

So are Teton winters in fact trending snowier, and if so, isn’t that counterintuitive given that the global climate is warming?

Also, are temperatures warming up locally in Teton County, and if so, is this impacting snowfall and snowpack in other ways?

This article examines these questions by evaluating temperature data in Teton County and snow data at Jackson Hole Mountain Resort dating back to the 1970s.

The Bridger-Teton Avalanche Center has an outstanding historical database of snowfall and snowpack data at multiple locations at Jackson Hole Mountain Resort.

Prior to about 2000, early season and late season data are spotty, so this study examines snowfall data during the mid-winter periods of December 15 through April 1, which covers the mid-winter ski season when a majority of the terrain is open anyways.

Winter temperatures have increased in Teton County since the mid-1970s

No surprise here, as global temperatures have steadily increased in recent decades. So it would make sense that temperatures in Teton County have increased as well, even if the rate of increase differs from that of other areas.

The PRISM Model takes into account recorded temperature data from NOAA COOP weather stations in Teton County and also extrapolates to 4×4 km grid points throughout the county based on terrain and elevation to generate countywide estimates.

Using this data, we can see that Teton County has seen a gradual but steady warming trend in winter temperatures (defined as December-March in this study) since the mid-70’s. First-hand data from the Moran, Alta, and Lake Yellowstone weather stations as well as others from Western Wyoming confirm similar trends to the county-wide graph below. 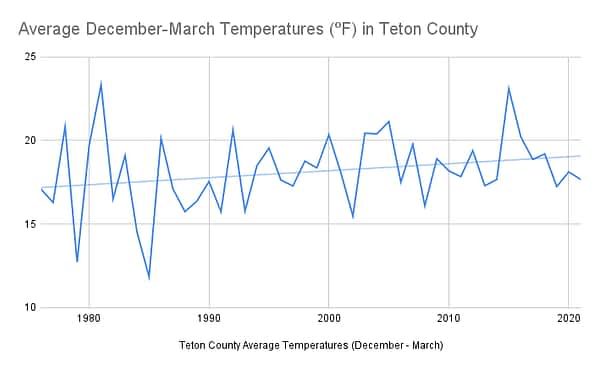 The average winter temperature in Teton County was 1.2ºF warmer from 2000-2021 compared to 1976-1999. This is not as big of an increase compared to some parts of the country and world, but it’s a noticeable increase nonetheless.

When examining individual months, December has seen the most abrupt warming trend with a 2.5º F increase from 1999-2020 compared to 1975-1998. On the other hand, February has actually seen a very slight decrease of 0.3ºF over the same time. January and March have seen 1.2ºF and 1.4ºF increases, respectively.

Winter snowfall has increased above 8,000 feet since the mid-1970s

The Rendezvous Bowl Plot on Jackson Hole’s upper mountain (9,580 feet) has seen a sizeable increase in mid-winter snowfall since the 1970s. Check out the graph below that shows December 15 to April 1 snowfall from 1975 to 2021, and notice the upward trend line. 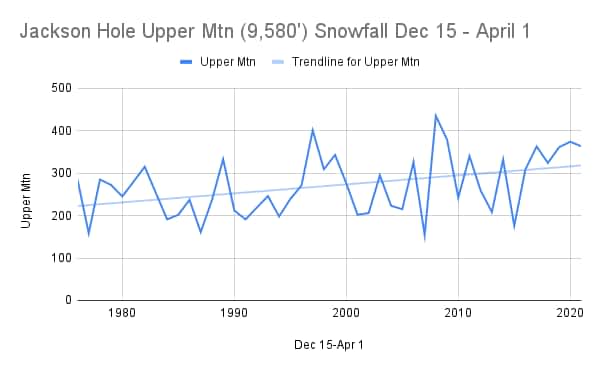 Also, we are on an amazing streak of six consecutive above-average snowfall winters at this location. The last below-average winter was in 2014-2015.

While the upper mountain is in a boom right now, the trends start to change as we go down in elevation. At Jackson Hole’s Mid-Mountain Plot (8,180 feet), we have only seen a slight increase in snowfall since the mid 1970s. 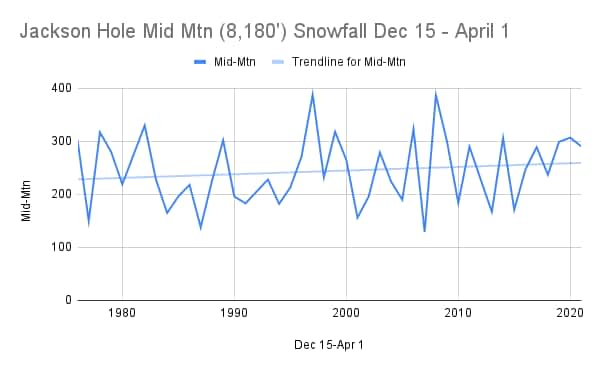 Winter snowfall has decreased below 7,000 feet since the mid-1970s 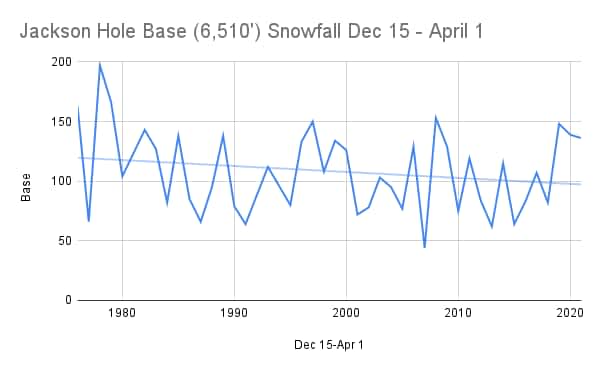 Why the difference between upper mountain and lower mountain snowfall trends?

It’s not uncommon for temperatures to be borderline for accumulating snowfall at the base of JHMR and in the Jackson Hole Valley, especially earlier and later in the season.

It’s possible that the increase in temperatures over the past 20+ years has resulted in a higher percentage of rain or non-accumulating snow events in the Jackson Hole Valley despite an increase in snowfall up high.

Whereas, on the upper mountain, temperatures are much colder and typically well below freezing during winter precipitation events. So even a slight increase in temperatures over time has not changed the fact that precipitation falls as snow, and this will likely be the case moving forward for at least the new few decades.

Snowpack is beginning to melt earlier in the spring below 9,000 feet

The snow depth on April 1 is widely used by water resource professionals as an evaluation date for the winter’s snowpack compared to prior years before snowmelt accelerates in April and May.

Despite an increase in snowfall at mid to upper mountain, comparing the snow depth (i.e. the amount of snow on the ground) to past years reveals that the snow is beginning to melt earlier in March, at least below 9,000 feet.

The upper mountain plot at 9,580 feet has seen a very slight increase in April 1 snow depth. 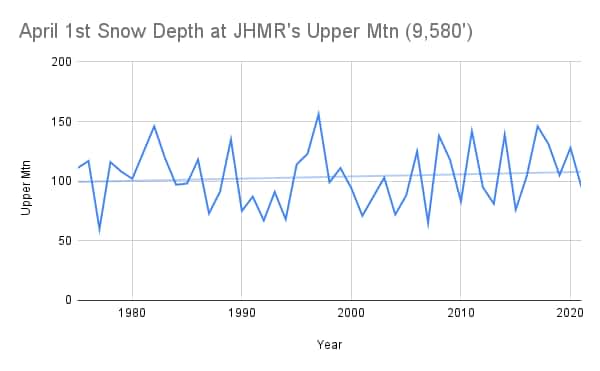 However, snow depth has only increased by only 0.5% during the period from 2000-2021 compared to 1976-1999. Considering snowfall increased at a much higher rate during these same comparison periods, it’s likely that melting is factoring in more late in the season than it did in the past.

This trend becomes more apparent as we head down in elevation. Despite a slight increase in snowfall since the mid 1970s, JHMR’s Mid-Mountain Plot (8,180 feet) has seen a noticeable decline in April 1 snow depth. 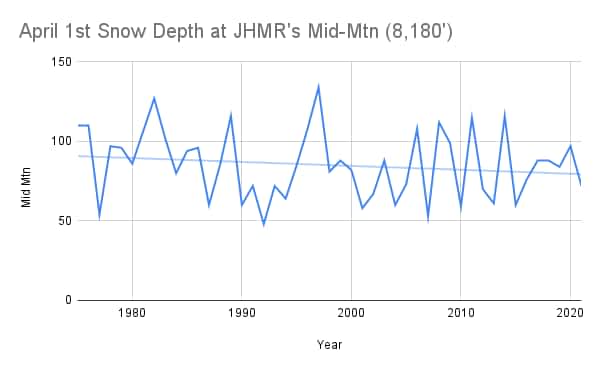 This article specifically studies snowfall data at Jackson Hole Mountain Resort. It would also be interesting to evaluate snowfall trends at weather stations in the Jackson Hole Valley. The challenge is that such data has numerous gaps in given months or years. It would take quite a bit of time to evaluate and “fill in” the gaps with estimates based on surrounding stations. A project for another day…

Additionally, it would be interesting to study first-hand temperature data taken from Jackson Hole Mountain Resort weather stations since the 1970s to see trends specifically on the mountain. This temperature data is available, but not in a way that is easily “crunchable” to evaluate daily, monthly, yearly and average stats. So this too is a project for another day.

What can we expect during Jackson Hole winters moving forward?

The difference in snowfall due to elevation is already exhibiting some trends that should be expected in a warming climate. The real question is how snowy will the winters be at the higher elevations of the Tetons in the future? This is less clear…

While the trend toward warmer temperatures is to be expected, Dr. Mass’s climate models and research also project that we will see a slight increase in winter precipitation between now and 2050 in Northwest Wyoming. Similar research has been conducted at the University of Utah as well.

In other words, winters should continue to be abundant across the higher elevations of the Tetons, but by mid-century, the base of the Tetons could be hurting more for snowfall.