WYOMING – The numbers are in and the data suggests that party-switchers during the Primary could have had an effect on some races including the Republican nomination for governor.

The Wyoming Secretary of State’s Office today released data on the number of persons who changed their party affiliation on their voter registration in the weeks before or on the date of the 2018 Primary Election—August 21.

According to the statistics, 12,509 persons in total changed their party affiliation between July 6 and September 20. While the number is not large, per se, compared to the total number of registered voters in Wyoming that took part in the Primary (139,809 total), party jumpers could have influenced at least one high-profile state race.

Gubernatorial candidate Foster Friess-R alleged it was ‘RIROs’ (Republicans In Registration Only) that sunk his bid for the GOP nomination. He could be right.

Let’s take a closer look at the numbers. Here, according to the SOS, is how they break down:

So, let’s say every Democrat that jumped ship temporarily in order to be able to participate in the Republican primary did so solely to thwart Friess and vote for the more perceived moderate, Mark Gordon. That’s 6,057 votes right there. Thrown in the 4,355 unaffiliated who wanted a say in the GOP side of things on August 21 and you have a total theoretical total of more than 10,000 votes that went to Gordon that he may not have had without the late-registration boost.

Local races were likely affected to some degree as well. For it’s size, Teton County by far led the way for greatest percentage of party-switchers. Some 957 registered Democrats turned red for the August race. Only Laramie County had more do that with 997.

“It is absolutely vital that anyone analyzing these party change numbers understand that these numbers are tied to a person’s voter registration and do not represent total ballots cast in the election, and that these numbers do not indicate for whom a person voted,” said State Election Director Kai Schon. 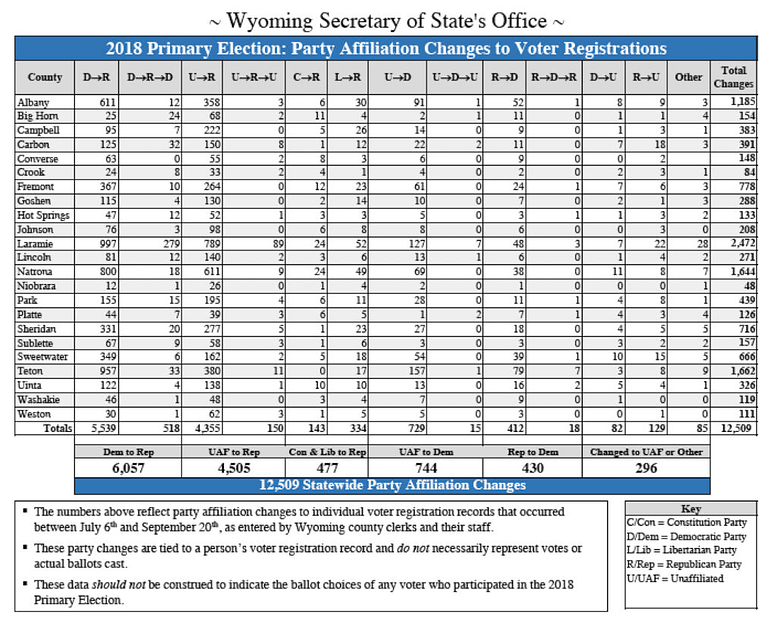