Teton County is preparing to accept ownership of 14 parcels of public land along the Snake River & Gros Ventre River corridors. The Snake River Fund asks the public to share their vision and comments for these parcels by September 3. Photo: Snake River Fund

JACKSON, Wyo. — Wyoming is home to massive mountains, unspoiled headwaters rivers, and vast expanses that are often public lands. In fact, just over 48 % of Wyoming is made up federal lands. In Teton County that number jumps to nearly 97%. Generally, when talking about public lands in Teton County, you can point to lands managed by the National Park Service, U.S. Forest Service, or the U.S. Fish and Wildlife Service. However, the Bureau of Land Management (BLM) owns and seldomly manages approximately 1000 acres of land. These parcels of land are scattered along the Snake and Gros Ventre River corridors. Teton County is currently accepting public comment about the potential to receive ownership of these BLM parcels.

The BLM parcels are the result of lands that were originally omitted by early federal land surveys of Jackson Hole as they are found within the Snake River floodplain. As a result of levee construction, many lands that were disconnected from the active river channel became utilized by private parties. Eventually, most of these originally omitted lands became private. However, some parcels became public lands through a series of legal settlements in the 1970s & 80s. The BLM parcels are within the river corridors and are situated between the southern boundary of Grand Teton National Park and the Bridger-Teton National Forest boundary near Hog Island. In the late 1990s the BLM’s Pinedale Field Office developed its Snake River Resource Management Plan (RMP). In 2004, the BLM published its Record of Decision (ROD) which allows the BLM to dispose of these parcels from BLM administration while ensuring they remained in public ownership and available for recreation, public access, open space, and wildlife habitat. For nearly two decades the Snake River Fund, Teton County, BLM, Wyoming Game & Fish Department, Bridger-Teton National Forest and Jackson Hole Land Trust have worked together to manage the lands for the benefit of the public and natural resources.

Today, Teton County stands as the only public agency willing to take ownership of nearly 1000 acres scattered among 14 different parcels. Certain parcels are centrally located, adjacent to primary roads, and provide developed public access (Wilson Boat Ramp & South Park Landing). Most others are only accessible by floating the river and generally serve as open space, wildlife habitat, and provide some agricultural use. Depending upon your perspective, these lands serve different interests. It’s best to consider it as a sliding scale of values which balance public access, recreation, open space, and wildlife habitat. 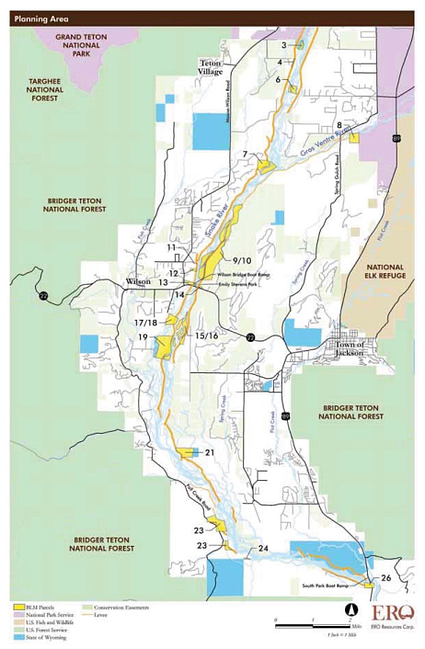 Snake River Fund supports the 2004 ROD with NO NET LOSS OF PUBLIC ACCESS in the river corridor. Senator Barrasso has submitted a letter to Teton County offering his support to shepherd a land transfer through federal legislation. Should our community support this, the time to act is now. Snake River Fund offers two current examples of private interests working with public interest to find ways forward with this land exchange.

Tough decisions need to be made about the other BLM parcels. How should those be managed? The BLM doesn’t want them. Teton County government is already stretched thin. Due to inaccessibility, some adjacent landowners enjoy a benefit of de facto private lands that are owned by all American tax payers. Is this right? Should their voice carry more weight than the general public’s? This is our once-in-a-generation chance to make sure these lands are managed locally for recreation, open space and wildlife habitat in perpetuity. Residents in Teton County have made tough public lands decisions before. Let’s keep that legacy alive and help our elected officials develop a vision for these public lands that benefits Teton County, the American tax payer, recreation and wildlife. We can find win-win solutions for all of these lands.

More information on this process can be found on the Teton County website. Public comments should be submitted by September 3 to BLMLandTransfers@tetoncountywy.gov.

Sponsored by The Snake River Fund