JACKSON, Wyo. — A series of powerful winter storms brought heavy snowfall to the Tetons over the past week. Through the first week of November, snow cover in the mountains was very light, but that changed in a hurry over the past seven days.

Heavy snow fell in the valley as well, with one-week totals ranging from 1-2 feet. Impressive for mid-November!

Here are the snowfall totals recorded around Jackson Hole and the Tetons over the past week. 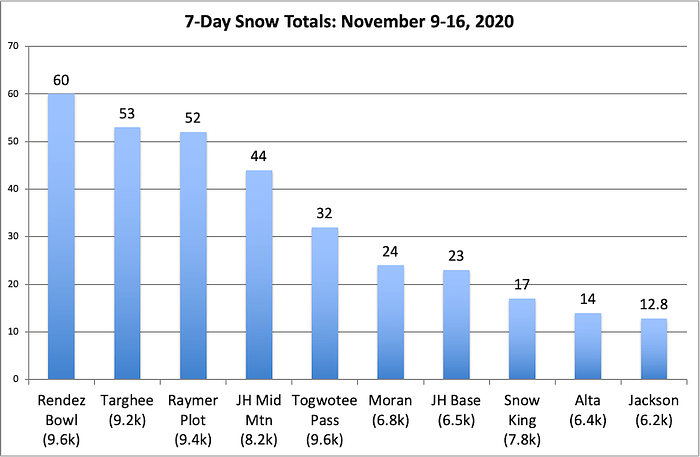 After the barrage of early season storms, the early season snowpack is now well above average for mid-November. The settled snow depth at the Rendezvous Bowl Plot is 41 inches, while the average value for the date is 25 inches. The heavy snow led to many eager skiers heading out to Teton Pass and Grand Targhee to enjoy some early season turns.

Here are the settled snow depths relative to average at various elevations. 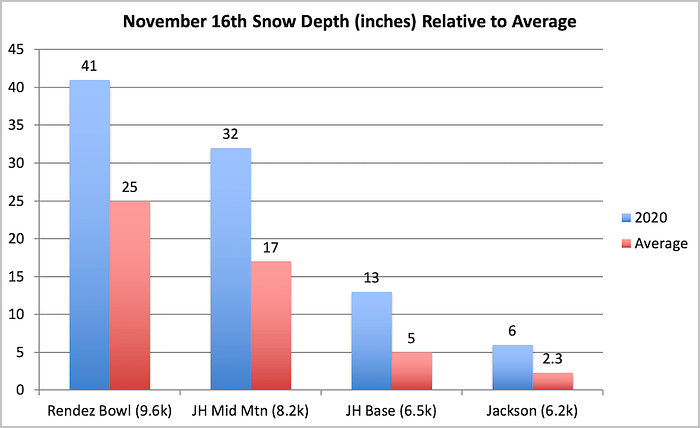 Taking a look at the snow depth map from OpenSnow gives a good visual indication of the snow depths around Jackson Hole Mountain Resort. This map is quite accurate and the data that feeds into it is based off of first-hand reports and model-derived snow depth estimates.

Over the upcoming week, the pattern will not be quite as active, though we do have one storm to track around mid-week.

The pattern change is already being felt early this week in the form of a big warm-up. After snow continued into Sunday night, warm air arrived with valley temperatures above freezing on Monday morning. Monday afternoon highs reached the low to mid 40s in the valley, while areas at 9,000 feet topped the freezing mark.

Total snow amounts with this storm will range from 5-10 inches in the Tetons with anywhere from a trace to 3 inches in the valley depending on the timing of the changeover to snow.

Light snow from this storm will linger into Thursday, then we’ll see a trend toward colder and drier weather heading into the weekend. Valley highs in the 40s from Monday through Wednesday will be replaced by highs in the low 30s from Thursday through Sunday.

The stretch of relatively quiet weather should continue into early next week, then long-range models indicate we could see a transition back to a more active pattern with better snow chances just in time for Thanksgiving.