The Teton County Sheriff’s Office in Idaho today announced it has positively identified the remains of Carroll, who had been reported as missing since November 14, 2005. Courtesy photos

TETON VALLEY, Idaho — Though a 15-year-old cold case remains unsolved, family members received some closure yesterday after being informed human remains uncovered in 2013 were those of John Michael Carroll—reported missing in 2005.

The Teton County Sheriff’s Office in Idaho today announced it has positively identified the remains of Carroll, who had been reported as missing since November 14, 2005, after reopening the case recently and retesting human bones found seven years ago in the general area Carroll once lived.

Carroll, who lived between Victor and Driggs in Idaho, was reported missing by his roommate after not returning home from work in Jackson for several days. Concern was also raised as Carroll’s personal belongings, including clothing items, wallet, identification and money were left at the home.

The Sheriff’s Office, under the direction of then Sheriff Kim Cooke initiated searches near Carroll’s residence and also areas near Rexburg where Carroll would frequently ride his ATV. Initial search efforts came up empty. 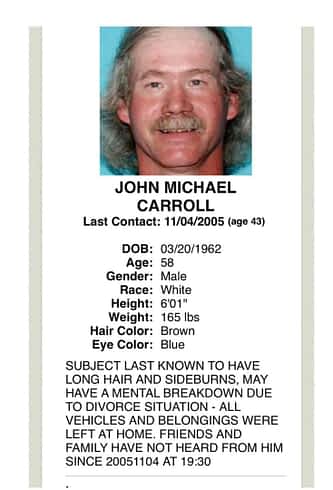 Efforts resumed in 2010 when sheriff’s deputies enlisted the assistance of K9 cadaver search teams to cover the area near Carroll’s residence. Search efforts with K9 units occurred again in the spring of 2011 with no results. The missing person case was placed in inactive status.

In June 2013, human remains were found by a cattle owner leasing property for his herd in a surrounding area. Initial investigation efforts were inconclusive in determining the identity of the remains through anthropological experts at that time. The remains stayed in the custody of TCSO.

In spring 2020 Detective Sergeant Andrew Foster and Sergeant Kendall Bowser reopened the missing person case after Foster and Chief Deputy Bridger Smith attended a training and took part in discussion over the use of genealogical DNA analysis similar to that which had been utilized to solve recent cases, including the 2017 Victor City Park Sexual Assault.

The TCSO made efforts to identify the found remains using modern DNA analysis methods. Detective Sergeant Foster made contact with Cyndi Hall, Quality Control Manager with Idaho State Police Forensic Services. Under Hall’s guidance, contact was made with the FBI DNA Casework Unit. Arrangements were made to ship the remains for analysis along with DNA samples from immediate family members of Mr. Carroll.

On October 16, 2020, TCSO was notified that the remains were positively identified as those of John Michael Carroll. Notification to the deceased’s family occurred yesterday, October 19.

The investigation as to the cause of Carroll’s death remains active and ongoing.

Anyone with information regarding the disappearance or death of John Michael Carroll are encouraged to contact 208-354-8783 to speak to Detective Sergeant Andrew Foster.