Camping in the shadows of the Tetons. (Courtesy VisitJacksonHole)

JACKSON HOLE, WYO – The Jackson Hole Travel and Tourism Joint Powers Board published its second annual report last week. It is filled with interesting facts and figures concerning everything tourism (and then some) in Jackson Hole.

In addition to the report, the Chamber of Commerce will host a Business Over Breakfast tomorrow morning at the Wort Hotel to delve into the details of how the tax works and where the money goes.

Anytime the lodging tax is mentioned, or the Travel and Tourism Board (the body that oversees and spends the funds collected by the tax) is brought up, the reaction is often a knee-jerk bristling by many.

“We don’t need to be promoting Jackson Hole right now,” some think. “Time to turn off the spigot.”

Indeed, Jackson Hole is a tourist-based community. It has served us well through the years and we’re pretty flush right now. But that is not the case in the rest of the state.

“Many communities throughout Wyoming have suffered significant budget cuts due to reduced revenue from mineral rights and a heavily reduced state budget.”

TTB chair Alex Klein stated in his address accompanying the Travel and Tourism Board annual report for FY2017. “Teton County [has] fared well because tourism is our main economic driver, and as this report indicates, tourism remains strong…”

The TTB’s new campaign is an effort to keep our local tourism driven economy strong and thriving. With six-month hotel occupancy rates indicating a 5% decline compared to last year the TTB’s efforts will very important to a lot of local businesses and community members who’s jobs depend on tourism.

What and when of the ‘bed tax’

Dubbed “the tax you don’t pay,” state statute mandates the allocation ratios concerning how funds from the lodging tax are spent.

Right now, 60% of the funds collected are used for the marketing and promotion of Jackson Hole, with about 20% of that spent on supporting smaller, local community events like youth hockey and lacrosse, cutter races, and SHIFT. The TTB recently unveiled its new winter campaign: Stay Wild.

The tax generates around six million dollars a year ($6.3M in 2016). Klein points out that without the lodging tax, the town and county budgets would lose approximately $2.5 million, annually—money that helps fund transit, pathways, emergency services and other civic amenities.

Discussions have ramped up recently about changing the spending formula to reduce the promotional component for increased mitigation. Local lawmakers say don’t count on that happening anytime soon. Teton County is the only county of 23 that bears the ‘burden’ of too much of a good thing when it comes to raking in tourism revenue.

In acknowledgment of the county’s uniqueness, Teton was granted a break by the legislature in 2010, when we became the only county to allocate lodging tax funds with a 60/30/10 split. Previously, the county was required to spend 90% of the tax revenue on promotion.

Desire or distaste for the lodging tax has always trended with the valley’s boom-and-bust cycles. In place since 1986, the tax was soundly defeated at the polls in 1994 when Jackson Hole was experiencing high times. It remained dormant until 2010 when the need to spur tourism was again recognized in the face of a sputtering economy.

But, facing a vote for a four-year renewal in November 2018, there is speculation the lodging tax will be a hard sell at the polls. 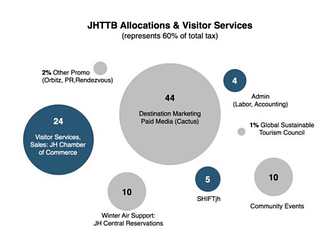 Business Over Breakfast hosted by the Jackson Hole Chamber of Commerce on Thursday, November 2 from 7:30-9:00am at the Wort Hotel. Breakfast costs $16 for Chamber members and $25 for the general public. Please RSVP today. Or by phone, (307) 201-2309.