JACKSON HOLE, WYO – The new living center at St. John’s Medical Center now has a name fitting of its purpose thanks to a robust community-engagement process.

At its August public board meeting, SJMC trustees approved the name “Sage Living at St. John’s Medical Center” for the future skilled nursing facility that will replace the current St. John’s Living Center. The naming process involved community submissions of possible names, a legal review of those suggestions, and a public survey of name choices, which found “Sage Living” to convey attributes of well-being, uplifting, wisdom, and vitality.

“The community has been with us lock-step through every phase of this project,” said chief communications officer Karen Connelly. “It’s heartwarming and hugely beneficial to have such broad-based participation.” 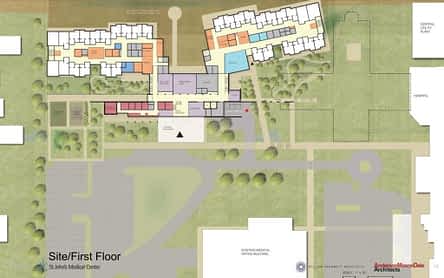 Throughout the public process, St. John’s Medical Center and St. John’s Hospital Foundation worked closely together to communicate the value of senior living services in Jackson Hole. During the SPET campaign and at subsequent public meetings with the project architects, it became clear that there is confusion about the breadth of senior services available in the community and significant confusion about the roles and services of the Living Center and the Senior Center in particular.

“It appears to be the perfect time to reduce this confusion by creating a new name for our New Home for a New Age,” said Malenda Hoelscher, director of senior living for the medical center. “Both organizations provide essential senior services. We believe that both organizations and the seniors we serve will benefit from the clarity of the new facility’s new name.”

To address the issue of name confusion with the Senior Center, the medical center and foundation collaborated on a process to invite the community to select a new name for the new living center. The major trend identified by the naming committee was that most of the name submissions reflected a sense of place and community. The naming committee winnowed the initial long list to several names that used words closely associated with key attributes of St John’s Medical Center and its resident-focused, 5-Star living center.

Next, a legal review was conducted to verify which of the most appealing names were available for use. The final step was a perception survey conducted with a market research partner, which validated the final options against key attributes, which convey the mission and values of the program.

The name that performed best in this research is a wonderful and perfect name for the new facility. It reflects the natural environment and maintains an important connection to the old name for a facility that has served this community well for nearly 30 years.