JACKSON, Wyo. — Another snowy weekend is ahead for Jackson Hole, and there is a lot to cover on this forecast. First, a strong storm will arrive on Friday evening, though the latest trends are indicating an intense but shorter-duration event. However, a second storm for late Saturday night through Sunday is now trending stronger, so overall we will see significant snow totals add up this weekend.

A Winter Storm Warning (from the National Weather Service in Riverton) is currently in effect for all of Teton County from 3 p.m. Friday until 11 p.m. Saturday. Keep an eye out for additional advisories that could be issued to account for the second storm on Sunday.

Conditions will be dry through much of the day on Friday with highs reaching the mid 30s in the valley under increasing clouds with gusty southwest winds developing. Snow will then arrive late Friday afternoon with heavy snow expected through the evening hours along with strong winds. 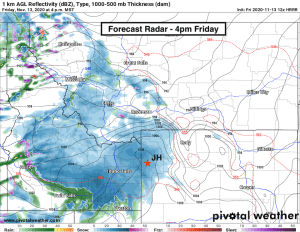 A cold front will arrive around midnight and snow rates will ease through the remainder of the overnight hours with light off-and-on snow showers continuing into Saturday afternoon. Snow amounts of 5-10 inches can be expected in the Tetons through Friday night with an additional 1-2 inches during the day on Saturday. The valley will see 2-5 inches on Friday night and an additional trace-1 inch on Saturday.

After some lulls in the action late Saturday afternoon and evening, the second storm will arrive from the southwest late on Saturday night with additional snow expected through Sunday. The main window of heavier snowfall rates will be from roughly midnight through 5 p.m. on Sunday.

Light snow will linger into Sunday night with any remaining flurries tapering off on Monday morning. Temperatures will be trending warmer on Sunday, so look for a transition from low-density snow to higher-density/wetter snow. Winds will be gusty from the southwest on Sunday, but not as strong as previous days.

Three-day snow totals through Sunday night will add up to around to 1-2 feet in the Tetons and 5-12 inches in the valley.

After a snowy weekend, a change to the pattern will occur early next week as a surge of much warmer air arrives from the southwest. This will result in a “thaw” event with highs warming up into the low 40s on Monday and then into the upper 40s on Tuesday while areas above 9,000 feet rise above freezing as well.

The next (weaker) storm looks to arrive late Tuesday night or Wednesday morning and with the warmer airmass in place, we will likely see a rain/snow mix in the valley. A similar pattern will persist through late next week (November 18th-21st timeframe) with weaker storms and rain/snow mixes in the valley. 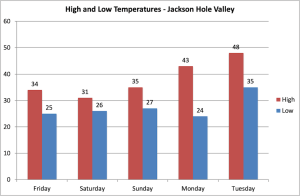 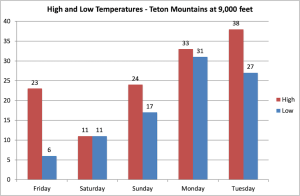 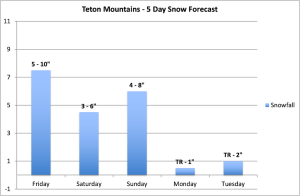 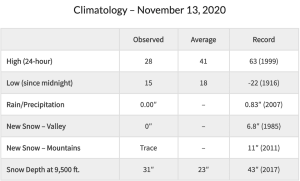