The suspect is a white male, 5’10” – 6′ tall, weighing about 180 lbs. The first incident happened on Oct. 25, at a local camera store. The suspect purchased a pair of photography gloves, paying with a fake $100 bill and a real $20 bill. The suspect was wearing a Carharrt jacket, surgical mask, no glasses or hat.

the second incident happened on Nov.6, at a local ski shop. The suspect used a fake $100 bill and received change from the transaction. He was wearing a black “Realtree” logo hooded sweatshirt, a blue surgical mask, ripped blue jeans, and black sneakers. He was wearing sunglasses and had his hood up during the transaction. The ski shop was able to catch the suspect on surveillance cameras. 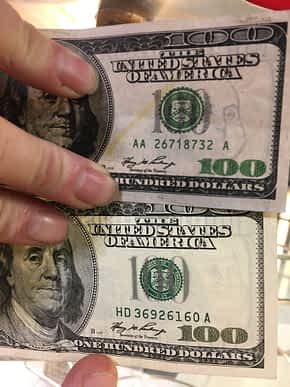 Both counterfeit bills passed are very similar. The investigating officer’s police report states “I compared the two bills and found that the counterfeit had all the same characteristics as the counterfeit bill from case# 2011-0686 (ski shop case), namely: same 2006 series bill, thicker heavier paper, darker dis-colored ink, smaller than a real bill, non-shimmered green ink, and a distorted “cartoony” watermark.”

The police department is asking merchants to re-visit their cash handling procedures with their employees and to re-familiarize themselves with the security features of US Currency as well as the use of counterfeit detection markers when accepting large bills. If anyone has any information concerning these crimes, please contact the investigations division at the Jackson Police Department at (307) 733-2331.