TETON VALLEY, Ida.  — The best outdoor music series of the summer opens its second show Thursday in Victor City Park. The Teton Valley Foundation encourages you to hit the park early to see local band Sghetti open the show with tasty tunes before Dwayne Dopsie & the Zydeco Hellraisers take the main stage later in the evening.

Few genres bring the good times quite like the Louisiana stylings of Zydeco music, and Dwayne Dopsie is dishing it out in spades. 2018 Grammy award nominee and “America’s Hottest Accordion” winner, Dwayne Dopsie plays a high-energy zydeco that keeps you wanting more. Dwayne hails from one of the most influential Zydeco families in the world. Although inspired by tradition, he has developed his own high energy style that defies existing stereotypes and blazes a refreshingly distinct path for twenty-first-century Zydeco music.

“Dwayne takes the instruments and traditions of zydeco to new levels infusing blues, soul and funk with a driving rub-board rhythm. The Zydeco Hellraisers’ sound is relentless, pulsating and funky, easily appealing to fans of all genres,” said the Toledo City Paper

This singer/songwriter and accordionist has performed in 40 countries and also in hundreds of cities across the United States, Europe, Brazil, Panama and Canada since debuting his band at age 19.

He has won several Offbeat Magazine Awards throughout the last six years for best accordion, best zydeco artist, best zydeco band, and best zydeco album. In September 2016, he was on “Louisiana Rising” with Harry Connick Jr and Randy Jackson, performing their song for the flood victims called “Rollercoaster,” which is one of the songs on their new cd, “Top of the Mountain,” released in 2017.

Most recently Dwayne Dopsie & the Zydeco Hellraisers was nominated for a 2018 Grammy award, for the Best Regional Roots Music Album.

Dwayne Dopsie & the Zydeco Hellraisers not only pump out incredible Zydeco music, but Dwayne’s incredible showmanship, interaction with the crowd, and the rhythm and blues in their music make it a performance not to miss. 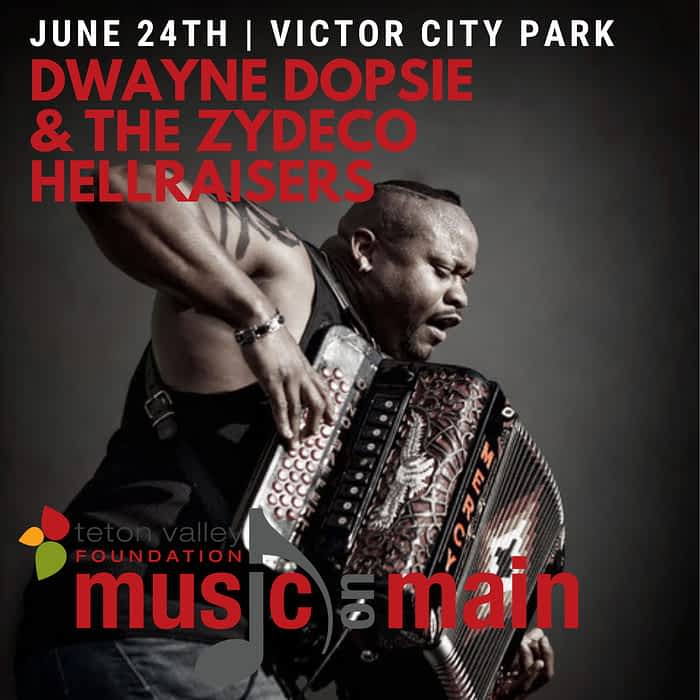