JACKSON, Wyo. — Today is an extra day. A day manufactured every four years out of necessity to keep this blue marble spinning obediently through the seasons. Without February 29, we would eventually be shoveling snow in June. Wait, we already do that in Wyoming.

When we talk Leap Year in Wyoming we are not referring to the bad bucker making the rodeo circuit in the late 1940s. Nor does Leap Year in Wyoming refer to the Kristen Holt romance novel Sophia’s Leap-Year Courtship, set in Wyoming. And for our purposes, any reference to the 2010 rom-com that’s so bad it’s a cult sensation, is irrelevant…for now. More on that later.

No, Leap Year to the world means a calendar correction every four years in order to match up the Gregorian calendar with what we see out the window. Before that, the Julian calendar—introduced in 46 BCE by Roman statesman Julius Caesar—was clicking away almost perfectly. Almost.

Before Caesar, Rome would simply add a month to the year whenever it felt appropriate in order to keep seasons where they belonged. The Chinese had been doing the same thing and still do, actually. They added a month to their calendar back in 2015.

Caesar correctly figured a “solar” or “tropical” year to work out to 365.24219 days. That’s 365 days, 5 hours, 48 minutes, and 45 seconds to be “Sheldon” exact. Pretty precise considering the times: pre-Google. But his workaround—an extra leap day every four years—was to get a bit wonky after a few generations. Sure, it worked for his kids—Augustus, Caesarion, and Julia Caesaris—but in the long game, the calendar would show its flaws.

Enter Pope Gregory XIII. The 11-minute surplus every year created by the imprecise Julian calendar kept the Pope up at night. So, in 1582, he called recalled the Julian calendar from every bank in Europe and replaced it with his Gregorian calendar—the one we use today. It put the extra day on February 29 and called it Leap Day.

His calendar decried: Now, a leap year occurs in every year that is divisible by four, but only in century years that are evenly divided by 400.

For that reason, 1900 wasn’t a leap year but 2000 was. In 2100, we’ll skip Leap Year again, and leap babies (known as ‘leapers’ or ‘leaplings’) will have to wait a full eight years to celebrate their birthday.

The mystic of Leap Year has crept into pop culture. As the movie Leap Year alludes to, Scotland was reportedly the first country to use a Leap Year day as the one and only time a woman could ask for a man’s hand in marriage—a role reversal that carries less ‘gasp’ than it once did. 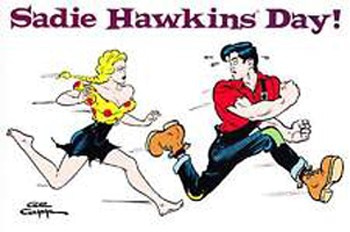 According to legend, in 5th century Ireland, St. Brigid of Kildare, a fifth-century Irish nun, complained to St. Patrick, the patron saint of Ireland, about women having to wait so long for a man to propose. St. Patrick remedied the situation with a leap-year loophole, declaring February 29 as a day that women could propose to men.

The folk tale suggests that Brigid then dropped to a knee and proposed to Patrick that instant. He refused, kissed her on the cheek and offered a silk gown to soften the blow. The Irish tradition therefore dictates that any man refusing a woman’s leap-day proposal must give her a silk gown, a silk dress, or a dozen pairs of silk gloved to hide the fact she has no engagement ring.

Scotland was the first country to make it law in 1288. None of these traditions can be traced back to any verifiable historical evidence, however. But they make a great story, especially if you can get Amy Adams cast as the Irish-looking American lass looking for love in Éire.

The whole Sadie Hawkins thing played well in Wyoming back in the day. After all, this is the Equality State.

On February 29, 1912, the Wyoming Tribune published the names of eligible bachelors for the benefit of “matrimonially inclined women.” It included Thomas A. Cosgriff, described as “wealthy, healthy, and wise.” In that order.

Closer to home, never needing much excuse for an all-night dance, residents of Kelly, Wyoming geared up a big celebration in 1916 for Leap Year.

Other meaningless facts regarding the four-year oddity include more superstitions and other trivial trivia.

In the town of Aurora, Illinois, single women are deputized every February 29. They may arrest single men and subject then to a four-dollar fine.

In Greece, as well as other countries, it is considered unlucky to marry on a leap day. In some places, marrying in a Leap Year is inauspicious.

For the numbers inclined, there is a 1 in 1,461 chance of having a birthday on February 29. Counting today, there have been 107 leap years.