TETON VALLEY, IDA – It may be an off-year in the election cycle with no presidential race or midterms, nationally, and nothing in the way of state politics to decide. But Victor residents will be headed to the polls tomorrow to decide on the future of its school system.

City leaders launched a “Victor Votes” campaign as a non-partisan effort to encourage Victor voters to head to the polls and make their voices heard at the November 7 election.

Mayor Jeff Potter explained, “Victor residents care deeply about our town and its future. It’s often hard to find the time to engage on local issues, especially for commuters, but having an informed and engaged electorate will benefit the residents of Victor now and in the future. We hope Victor Votes will emphasize the importance of being involved with the community you live in. Voting is an easy and critically important way to do that.” 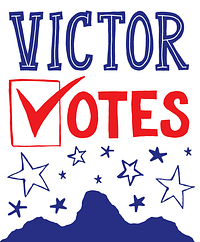 The city worked with local artist, Stacey Oldham, to design the Victor Votes logo to be used as part of a campaign to raise awareness for upcoming public ballot elections.

At the forefront this election is the need for a new school—two, actually—and sorely-needed renovations to other facilities. The population in Teton Valley continues to grow as a result of economic prosperity affecting the entire region. Many Victor and Driggs residents commute to Jackson for work while their kids attend school back home.

Schools in Teton Valley have been in neglect and are facing overcrowding issues. Unlike Wyoming, which funds school buildings primarily through oil, gas and coal revenues, Idaho statute dictates that the only mechanism for the funding of school facilities is a bond paid for by county property tax.

What makes these bond votes more challenging is the ‘super majority’ rule. Idaho is one of only two states in the US to require that a school facilities bond pass by a majority vote of 66.67%. Many in the education industry point to the onerous process as a main reason why Idaho finds itself at the bottom of the national education rankings year after year.

Should the bond fail to pass, the district would then be forced to purchase and install modular classrooms to house the students which would be at a similar cost to taxpayers without the benefits, reduction in maintenance costs, and longevity provided by new schools.

The three elementary schools located in Victor, Driggs, and Tetonia were built in 1941, 1952, and 1951 respectively. Both Victor and Driggs Elementary schools are at 170% capacity. Every inch of space is being utilized for makeshift classrooms, including hallways, closets, and the space underneath the bleachers in the gym.

Polls are open from 8am-8pm on Tuesday, November 7. Teton County, Idaho residents can register to vote at the polls on election day with photo ID plus a document showing name and current physical address (a phone bill, utility bill, certificate of auto insurance, etc). 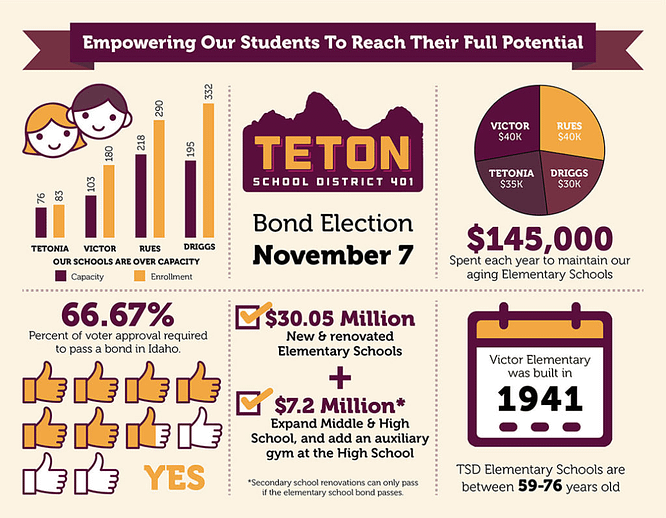