The contaminated boat was prevented from launching and prevented a release of the highly invasive quagga mussels in Yellowstone waters. If released, AIS can cause catastrophic changes to the ecosystem.

“I commend the Yellowstone AIS inspection team for their efforts at preventing the introduction of this dangerous aquatic invasive,” said Superintendent Cameron Sholly. “It’s critical the public continues to partner with us to do their part to prevent the spread of AIS in Yellowstone waterways.”

Control and removal of AIS after they become established in a watershed is usually impossible and efforts to reduce their impact can be extremely expensive.

Quagga mussels (Dreissena rostriformis bugensis) are one of many AIS that pose a grave risk to the ecology, recreation and economy of the park. 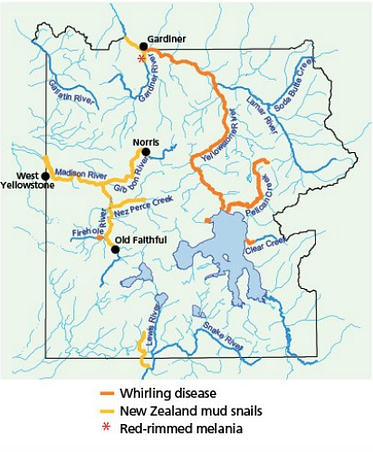 Currently, there are three aquatic invasive species present in the park’s waterways. These species are causing a significant detrimental effect.

Myxobolus cerebralis is a parasite that is causing whirling disease in cutthroat trout and other species. New Zealand mud snails, form dense colonies and compete with other native species. Red rimmed melania is a small snail that was imported by the aquarium trade in the 1930s. It was discovered in the warm swimming area at the confluence of the Boiling River with the Gardner River in 2009.