WYOMING – Wyoming Secretary of State Ed Murray announced this week that his office will commemorate the 125th Anniversary of the Great Seal of the State of Wyoming. The anniversary began on Thursday, February 8, 2018—exactly 125 years after the Great Seal was adopted in a bill passed by the Second Wyoming Legislature and signed by Governor Osborne on February 8, 1893.

“I’m honored to commemorate the 125th Anniversary of the Great Seal of the State of Wyoming. Our state’s founding strengths and principles —including women’s suffrage—are visible and prominent on the Great Seal. The words and symbols on the seal hold great power and meaning for Wyoming, today, tomorrow, and yesterday. I’m looking forward to continuing to promote our State’s Great Seal on its 125th Anniversary,” said Secretary Murray.

The Secretary of State is the custodian of the Great Seal under the Wyoming Constitution. The Great Seal is used to represent the sovereign authority of the State of Wyoming. The seal’s design includes a woman in the center holding a banner proclaiming ‘Equal Rights,’ symbolizing Wyoming as the first government to grant to women the right to vote and to hold office. On top of the pillars rest lamps from which burn the Light of Knowledge and scrolls encircling the two pillars bear the words ‘Oil,’ ‘Mines,’ ‘Livestock’ and ‘Grain.’ 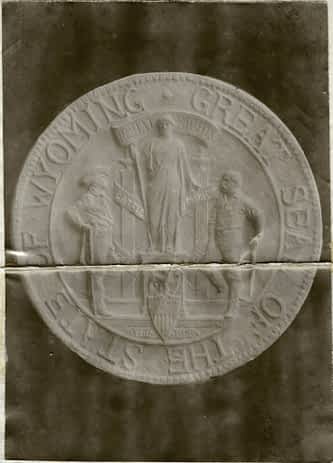 On January 10, 1891, the first State Legislature passed an act providing for a State Seal. However, the selected seal design, which left the House with the enrolled act for the Governor to sign, never reached him. The seal design was substituted while on its way to the Governor’s office. The Governor signed the enrolled act unknowingly but once discovered, it caused a scandal. The woman in the design was not wear a flowing robe, the woman in the substituted Seal was in the nude. This Great Seal was never used.