JACKSON, Wyo. — Get ready for a snowy week in Jackson Hole. The storm door has opened across the Western U.S. and two storms moving in from the Pacific will impact Western Wyoming with heavy snow totals possible in the Tetons.

The visible satellite image from Monday afternoon shows the first storm approaching from the northwest, which will dump heavy snow in the Washington Cascades prior to reaching Wyoming. 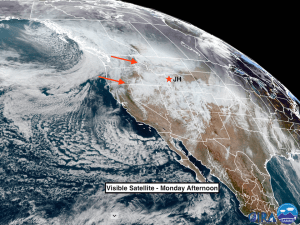 The first system will arrive from the northwest on Tuesday, bringing periods of snow from late Tuesday morning through Wednesday evening. In fact, the National Weather Service in Riverton has issued a Winter Weather Advisory for all of Teton County, valid from 11 a.m. Tuesday through 10 p.m. Wednesday.

In terms of atmospheric “energy”, this mid-week storm will not be overly strong, but a consistent feed of abundant Pacific moisture, cold temperatures aloft and favorable winds will result in heavy snow totals adding up for the Tetons.

The snow that falls on Tuesday and Wednesday will be low-density and “powdery” thanks to the cold air in place. It would be great storm for powder skiing if it weren’t so early in the season.

Total snow amounts from Tuesday through Wednesday will range from 8-16 inches in the Tetons and 2-5 inches in the Jackson Hole Valley.

Travel conditions over Teton Pass will be most heavily impacted on Tuesday evening, Wednesday morning and Wednesday evening. High temperatures on Tuesday and Wednesday will only reach the upper 20s to near 30 in the valley, so expect snowpacked roads to develop across the lower elevations and in the Town of Jackson as well. The usual “windy spots” could see some minor blowing snow, but winds do not look particularly strong with this system.

After a break in the action on Thursday and the first part of the day Friday (with continued below-average temperatures), the next storm will arrive on Friday night with the heaviest snow expected during the day on Saturday.

The potential for moderate to heavy snow will exist with this storm as well. The position of the jet stream is projected to set up in a favorable manner just south of Jackson Hole for abundant moisture and energy to arrive, enhancing snowfall rates.

The exact timing and snowfall amounts are still in question since this storm is several days out, but for now, I’m expecting the heaviest snow and highest road impacts to occur on Saturday.

Also, since this will be the second significant storm this week and a storm with potentially higher-density snow following a storm with low-density snow, backcountry travelers should expect elevated avalanche danger this weekend. The Bridger-Teton Avalanche Center has started issuing daily forecasts for the season, so be sure to check their forecasts for the latest avalanche conditions.

After a cold and snowy week, medium-range models are indicating we will see a warm-up starting on Monday, November 16. The jet stream will be lifting north of Jackson during this time with a strong southwesterly flow ushering in subtropical air from the South Pacific.

The bigger question is whether or not we see any moisture early to mid next week, and if so how much. If we do see moisture arrive, it would likely be in the form of rain in the valley with wetter/denser snow up high. But it’s also possible the moisture stays north of Jackson Hole and we end up with dry weather for a few days. Models are currently in poor agreement.

Regardless of precipitation potential, it does look like we are in for a “thaw” event next week to remind us that it’s still only November. However, I don’t think we’ll see any extended dry spells and we could see a more favorable pattern for snow return by November 20 or so.