Some capital projects will be put on hold as the town tightens purse strings for FY21 budget. Photo: Nick Sulzer // Buckrail

Town manager Larry Pardee admitted it’s a balancing act maintaining critical core services during what he called “unique and dangerous” times with COVID, and at the same time making deep cuts to a budget ravaged by a sharp decline in sales tax collection—the lifeblood of Jackson’s revenue.

“We made fair and deliberate cuts across all sectors of the organization,” Pardee said. “We are committed to delivering our core services. Yes, it will be a little different but we will be there. We also can’t lose sight of future planning. Right now, we are as lean as we can be.”

Cobbling together a FY21 budget will be challenging enough in the face of dwindling sales tax revenue but more than one elected and staffer pointed out at a workshop Monday that dark clouds won’t be lifting anytime soon and one eye needs to be kept squarely on FY22 and beyond.

Belt tightening in the face of shrinking revenue

The preliminary peek at a new budget is based on projections of a 50% decline in revenue. Pardee calls it a conservative and fair estimation. Electeds agree it is a place to start but worry it could end up being much worse. Pardee added that town finance director Kelly Thompson and his staff have done their best to reduce expenditures, dip into reserves, and shift funds around to come up with a tentative FY21 to present. 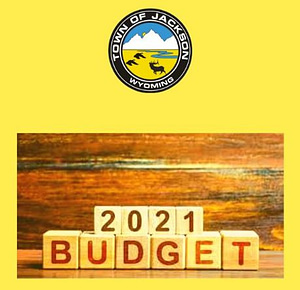 “My concern is it could get worse,” said councilman Jonathan Schechter. “March was a pretty bleak month. I’m already starting to get anxious about FY22. We’ll need to monitor it like a hawk every month. There’s just no way of predicting anything. We are in such uncharted waters.”

Councilman Jim Stanford agrees, the bigger picture has to remain in focus because the struggle is far from over.

“In contrast to what we’ve been receiving by email from some of the armchair epidemiologists of our community, I’m unfortunately becoming more convinced we are saddled with this for a bit of a long haul here. Some people are saying we need to move on to the next game. We are really only in the 2nd inning of this game. We are not in the 7th or 8th inning.”

Stanford is also holding out hope the town will be on the receiving end of federal and state aid, saying Teton County is a prime example of a community hit hard by the loss of revenue due to COVID. Schechter cautioned against thinking the state will have any assistance to provide anytime soon.

Mayor Pete Muldoon admits a good chunk of the budget numbers for FY21 are educated guesses at this point and expressed worry that revenue projections could fall off worse than a 50% decline.

“I think we were all somewhat concerned there was a slowdown, a structural one, on our economy before all this happened whether that be a reduction in stock market value, which is important to some people, or just a general economic slowdown. But this could accelerate a slowing of the economy that was already in the works,” Muldoon observed. “So here we have a huge economic shock directly related to restrictions from COVID-19. They could accelerate a slowing down that may have already been in the works. Working under the assumption that we could get back to normal next year if by some chance we were to miraculously have a vaccine by early 2021, we are [still] going to be talking about depleting the reserve fund to some degree.”

Mostly cloudy, a drizzle, or a downpour?

Pardee pitched a $4.8M drawdown from “rainy-day” reserve account and another $2M from internal savings in order to balance the budget, which would still leave $3.7M in reserves. That number is significant because it would satisfy the 20% minimum reserve the state of Wyoming recommends and which has been adopted as policy by the county.

Council members agreed Monday they were okay with tapping reserve funds, saying if not now, when? Schechter advised it was no sustainable way to run an organization. Stanford scrutinized joint department funding as a possible place for bloat to hide.

“Drawing down reserves is not a sustainable model. You can get away with it for one year, I suppose,” Schechter said. “What this is essentially doing is buying us some time by [tapping] reserves. The question is keeping staffing and services at their current level, is this going to work?”

Stanford said he was comfortable with using reserve funds but not without questioning requests for funding certain capital projects and joint town-county departments.

“I’m baffled by some of the budget requests given what we are facing. Some of these joint requests are really high. Special events in particular. We might not have any special events in 2020, or very little. There might be opportunity to make some cuts here,” Stanford said.

The longest-serving councilman added that the town’s bill for Fire EMS seemed high at an additional half-million ask for FY21 over last year. “We were stretched to make that last year,” he noted.

Stanford said he looks forward to hearing from Fire Chief Brady Hansen on Thursday. The first thing he will ask the Chief is whether his department can halt the renovation on Fire Station 1—a job that has experienced budget overruns—and continue to work out of their temporary home at the fairgrounds.

“Maybe we hit pause while it is just a hole in the ground [on E. Pearl],” Stanford wondered.

“This is the rainy day. No shock there,” Muldoon consented. “My concern is we will deplete [our reserve fund] and find ourselves at some point not only not able to replenish it and but need it again. I don’t know how we would survive a second year of reduced revenue. We need to find ways to diversify revenue.”

Councilman Arne Jorgensen agreed “anxious times” have called for a diversity of revenue sources. He touched on a 7th cent of sales tax which will be put to voters this November and said the town has always “danced around” the idea of a property tax.

Muldoon said he was done dancing around the notion of a property tax in Jackson, saying that maybe services like fire and police that protected property should be paid for through property taxes.

The mayor also cautioned that a 7th cent or a property tax revenue stream would not begin supplementing the budget until May of 2021 at best.

With direction from the mayor and council that they were all ‘thumbs up’ on an understanding that ballpark estimates put projected revenues at half what they were supposed be for FY21, and that dipping into the reserves was the only choice for now, staff will go back to work hammering out a final budget, which needs to be finalized in a month and a half.