JACKSON, Wyo. — The Jackson Hole Clean Water Coalition is asking you to pick up dog poop. Studies show that dog waste is the largest source of Escherichia coli (E. coli) to surface water from human activities in Jackson Hole. 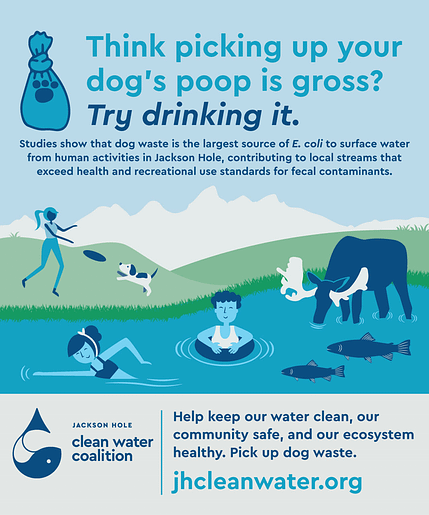 In 2017, the WY Department of Environmental Quality found that sections of Fish Creek and Flat Creek exceeded E. coli concentrations deemed safe for full body contact recreational activities. E. coli is a group of bacteria found in the intestines of warm-blooded animals, including people. E. coli is used in studies as a proxy for the risk of fecal contamination. In other words, E. coli can be related to the likelihood of the presence of pathogens from animal or human feces. As such, scientists use E. coli to measure the amount of fecal material entering water bodies as a cheap and straightforward method of inferring the risk of ingesting pathogens.

A study conducted in 2003 by Teton Conservation District identified that less than 20% of the proportional contribution of E. coli found in both Fish and Flat Creeks originated from sources related to human activities. Roughly 80% was from natural sources—think birds, beavers, ungulates, etc. In terms of human-caused sources of E. Coli, dog waste was the largest contributor, followed by wastewater, bovines, and horses. This suggests the single biggest action we can take collectively to prevent further fecal contamination is simple: pick up your dog poop.

A lot has changed in Jackson Hole since the 2003 E. coli study. Along with our human population, our dog population has grown substantially. With grant funding assistance from Teton Conservation District, a University of Wyoming graduate student is conducting research on E. coli and aquatic microbial communities to determine sources of potential contamination to surface waters in the Jackson area in summer 2021. Results from that study are expected in 2022.

Help keep our trails and pathways clean by taking advantage of the PAWS Mutt Mitt stations, with 26 managed stations boasting free mutt mitts and proper disposal receptacles. You can also purchase dispensers and biodegradable mitts directly from PAWS by calling 307-734-2441. Waive hello and thank a PAWS Poop Fairy, or better yet join their team by emailing [email protected].