JACKSON, Wyo. — From 1945-1960, Preston A. Parkinson was the owner of the Million Dollar Cowboy Bar. He had big dreams for the bar and downtown Jackson Hole.

Press, as he was known, had been managing a private nightclub in Idaho Falls, when he purchased the bar from Ben Goe. Press had also spent a lot of time in Las Vegas, and that’s where he seemed to get his inspiration for revamping the Cowboy with floorshows, gambling, buffets, and above all, loads of neon.

As soon as Parkinson took possession of the bar he overhauled the front with new doors and windows, a portico of knobbled pine and neon advertising, neon-outlined animal heads, and the iconic bucking bronco spinning around on the roof that is still there today.

Then, in 1953, Press was in the basement of the bar with Lew Bartholomew, an employee of the Teton Gas and Appliance Co., trying to find out why their new gas water heater wasn’t operating. Bartholomew found the pilot light out and struck a match to relight it. The Cowboy Bar exploded in a ball of flames. A colorful article in the next issue of the Jackson Hole Guide tells it best:

“The interior of the place was extensively damaged, the entire floor being buckled and broken, with a huge hole in the floor in front of the service bar, part of the cocktail lounge. Legs were broken off of the ornate chairs, the huge pillars crumpled, the pine trimming torn from the wall and, of course, nearly all the expensive and elaborate installations in the basement destroyed. The back of the building was pushed partially out, and the plate glass windows in the front were hurled across the street. The marquee bracing was weakened and sagged but has been propped up. Carpenters say that beams throughout the building are sprung and broken and that the work of rebuilding will have to start practically from “scratch.” The cost will run into several hundred thousand dollars, it is estimated.

Mrs. Parkinson was alone in the penthouse apartment when the blast came. The house rose a couple of feet into the air and then settled down easily with little damage. She ran out on the roof—the stairway being blocked and filled with clouds of smoke and dust—and was rescued by means of a ladder.

Coming at that hour there were very few people in the bar at the time of the blast. Mr. and Mrs. John T. Tobin and Mr. and Mrs. Reed Clements of Lewiston, Ida. were sitting at the bar and were blown on the floor but not hurt. The Tobin car was in front of the Cowboy when the blast went out the windows and was extensively damaged by flying glass. The heels were blown off one lady’s shoes.

Some wine bottles broken and spilled on the sidewalk caused a lot of people to think there had been a lot of blood spilled.

A freak of the blast was that as it passed the shelves of liquor behind the bar it neatly uncapped three unopened bottles of whiskey without spilling a drop.

Bill Busking and another man who were seated at a table beside one of the front windows were blown out the window, the glass, fortunately, preceding them. Unhurt, Bill stepped back thru the empty window, took up his hat, still lying there, and walked away.

By telephone from his hospital bed last night, Press advised The Guide that he intended to rebuild as fast as possible, and that he would not be satisfied with a “cobbled-up” job, but that when completed the bar would again be one that he, and Jackson folks, could be proud of.”

The bar was insured, and its renovation began almost immediately. Press installed new facilities, opening a new Chuck Wagon Café back by the dance floor. He replaced the gaming tables that were destroyed in the blast, and he rebuilt the bar. Most of the knobby pine was intact, although parts of it were scorched and needed to be replaced. For the most part, the worst damage was in the basement, blowing up the roulette wheel and the smorgasbord appliances, and in the west end where the dance floor and orchestra pit were located. The wall at the back was pushed out into the alley. The floor of the lounge was blown to bits, the orchestra stage and murals destroyed, furniture demolished, carpet torn, etc.

Parkinson started at the front of the Cowboy, trying to get it reopened and making money once again. On July 11th he opened the front third of the bar for drinks and gaming. 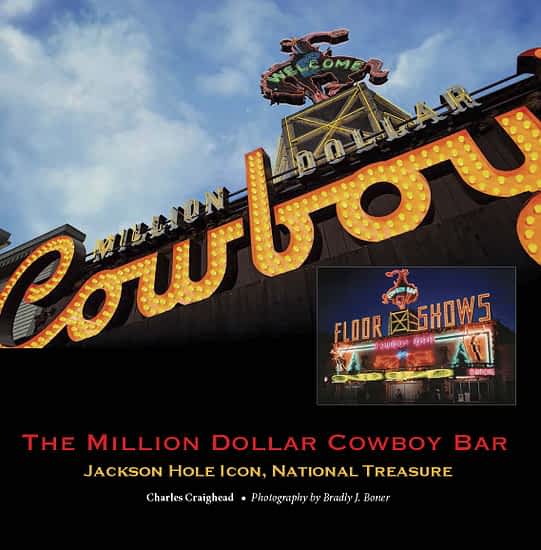 The huge Lee Parkinson murals that lined the Cowboy were destroyed except for the ones up near the entrance. The surviving Lee Parkinson paintings can still be seen behind the bar on the south side and high on the south wall in the gift shop. Press hired Idaho artist Stanley Samuelson to paint new murals to replace the damaged ones, and those now start at the west end of the bar and circle around to the stairwell to the basement restaurant. Samuelson also made the back-lit scenes on glass that hang above the bar, and the big, circular chandelier with revolving scenes that hangs from the ceiling halfway back. Most of what Press accomplished in the years following the blast still remain intact in the Cowboy Bar.

Outside, Parkinson made the biggest change of all. His neon signs on top of the portico advertising dancing and dining came down, and in their place came a big new sign: Million Dollar Cowboy Bar. The story is that Preston Parkinson insured his newly remodeled bar for one million dollars, and that nice round number inspired the name.

This story is taken from The Million Dollar Cowboy Bar: Jackson Hole Icon, National Treasure, written by Charles Craighead. This book is available for purchase in the Cowboy Bar Gift Shop.