JACKSON, Wyo. — Despite an above-average winter in terms of snowfall, snow coverage in the Teton Range and Western Wyoming is declining well ahead of schedule. As a result, concerns for water resources and summer fire season are beginning to arise with no end in sight to the dry pattern.

Following a deep February, the pattern shut off at the beginning of March and snowfall and precipitation have been minimal since then. We’ve had several spells of chilly and unsettled weather, but with very little precipitation to show for it.

Snowpack (i.e. the depth of snow on the ground on a particular date) peaked in the Tetons on February 20 with depths of 117 inches at Jackson Hole Mountain Resort’s Rendezvous Bowl and 122 inches at Grand Targhee. Ever since then, snow depths have been declining.

The average date for when the snowpack at the Rendezvous Bowl Plot reaches its deepest level is on April 9. In other words, peak snowpack was about six weeks earlier than average this year.

The graph below is a good visual representation of the declining snowpack during a time of year when snowpack is typically growing. 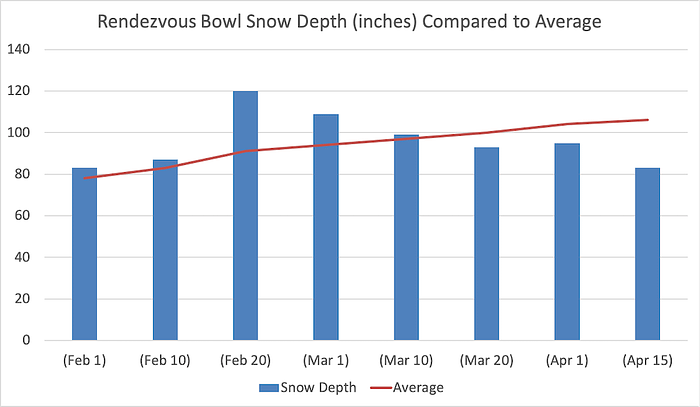 Is there any hope for a late-season rebound? Not really, at least in terms of boosting our snowpack for more than a day or two at a time. A dry pattern is likely to remain in place through about April 24 with only some occasional disturbances with light rain/snow showers – similar to recent weeks. Still, we could always get some good late-season storms in May to help delay the melt.

There are some signs we could see a somewhat wetter pattern toward the end of April, but confidence is low at this time.

The map below shows snowpack values relative to average across the major river basins in Wyoming in terms of the amount of water content contained within the snowpack – also known as snow water equivalent.

Most of the state is about 10-20% below average, except for some areas east of the Continental Divide that are above average. 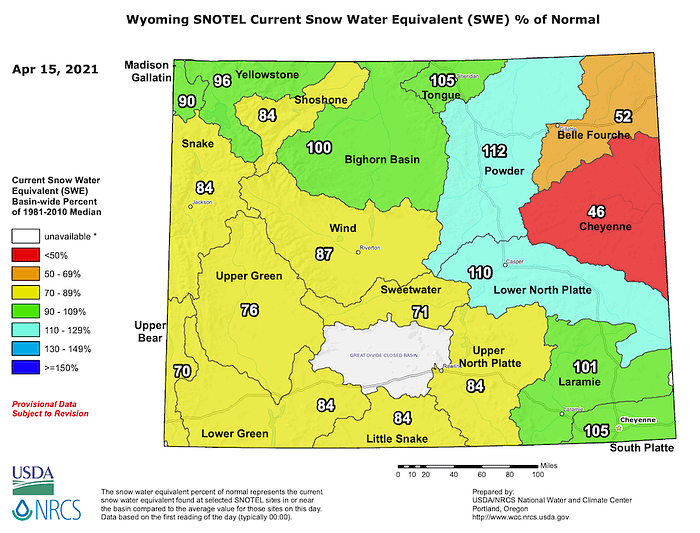 In addition, the latest U.S. Drought Monitor has now expanded “Moderate Drought” into eastern portions of Teton County while the rest of previously drought-free Northwest Wyoming is now under an “Abnormally Dry” classification, which is basically a precursor to drought if weather patterns remain dry moving forward. 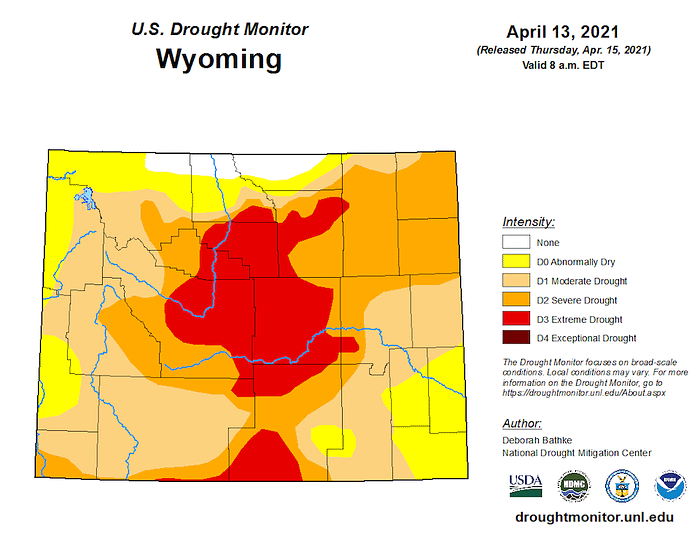 Weather patterns in May and June will largely determine what our summer could look like in terms of water resources, drought conditions and fire danger.

While we could all use a little more Vitamin D at this time of year after a long winter, we could also really use some cool/wet systems later this spring to help curb fire danger heading into the summer now that our snowpack is below average.