JACKSON, Wyo. – It’s no secret that the Greater Yellowstone Region is one of the snowier locations in the United States, thanks in part to its high elevation, northerly latitude and access to Pacific moisture.

Terrain and elevation result in large variations in snowfall in Teton County as well. Average snowfall from October through April ranges from 75 inches to over 450 inches of snow in the county.

The map below shows a distribution of average snowfall from weather stations across the Jackson Hole area during the seven-month period from October through April. 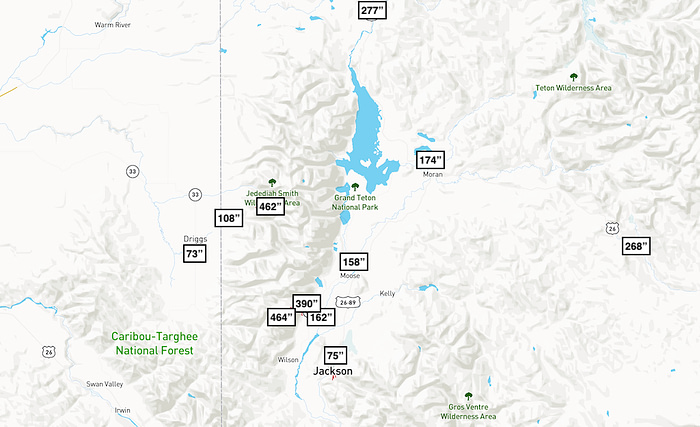 Jackson Hole’s mid-mountain at 8,180 feet also averages an impressive 390 inches of snow. Snowfall drops off considerably as you drop into the valleys, on both the Jackson Hole side (WY) and the Teton Valley side (ID).

The difference in high elevation versus low elevation snowfall is largely a result of the orographic effect. When moist Pacific air arriving from the west encounters a mountain barrier – in this case, the Teton Range – the air is forced to rise and expand as it does so due to lower pressure at higher altitudes.

When moist air expands, it cools and condenses into precipitation, depositing heavier precipitation the more it is forced to rise. This typically favors the windward (western) slopes of the Teton range and the upper leeward slopes on the eastern side of the range.

As the moist airmass descends the other side of a mountain range, it compresses, warms and evaporates, resulting in lesser amounts of precipitation reaching the downwind valley. This partially explains why the Jackson Hole Valley receives less snowfall.

Within the Jackson Hole Valley itself, there are differences as well. Areas at the base of the Tetons and north of the airport – including Teton Village and Moose – receive double the amount of seasonal snowfall compared to the Town of Jackson. This is partly due to a gradual rise in elevation from Jackson northward into Grand Teton National Park and a larger number of terrain barriers surrounding the town. Also, areas at the foot of the Tetons receive more “spillover” snowfall compared to areas farther east.

Additionally, the Moran weather station (where average snowfall is 174 inches) receives heavier snowfall when storms move across the northern Tetons and northern Teton County, because there is a little gap just north of the Tetons where Grassy Lake Road is located, and moisture can stream through this gap unobstructed and result in heavier snow over northern sections of GTNP.

Despite the valley snowfall differences, Jackson still averages 75 inches of snow from October through April which is a lot more than most places in the U.S., including large cities near the mountains such as Salt Lake City and Denver.

Storms that dump heavier amounts of snow in Jackson typically arrive from the south or southwest, when the rain shadow effect of the Tetons is minimized. During storms when upper atmospheric energy is strong, the Town of Jackson and the Jackson Hole/GTNP Valley can still see good snowfall as well.

Interestingly enough, the average snowfall in Driggs (73 inches) from October through April is nearly the same as that of Jackson. Of course, individual storms often impact one side of the valley in a much different manner than the other, with some storms depositing large amounts of snow in Teton Valley and minimal snow in Jackson, or vice versa.

Unfortunately, there is little in the way of snowfall data available for Alpine, as this would have been an interesting comparison. Alpine sits lower in elevation than Jackson and Teton Valley, which can influence precipitation type when temperatures are borderline. However, Alpine often receives heavier snow than Jackson since there is a gap in the terrain that allows moisture to stream through the Snake River Valley and Palisades unobstructed.

Despite average snowfall of over 450 inches in the Tetons, Togwotee Pass on the eastern border of Teton County receives a relatively modest average of 268 inches of snowfall despite sitting a similar elevation compared to Jackson Hole and Grand Targhee ski resorts.

The reason for this discrepancy is that storms lose much of their moisture as they pass over the Tetons and surrounding Western Wyoming mountain ranges. Although air does rise and cool/condense as it ascends from the JH Valley toward Togwotee Pass, there is usually less moisture to work with in the first place, and snowfall is lighter as a result.

However, due to its location along the Continental Divide and better access to Canadian and arctic cold fronts from the northeast, Togwotee Pass is also a colder location than the Tetons and often has drier and more powdery snow.

This colder/shallower “continental” snowpack is weaker and more dangerous than the Tetons’ deeper “intermountain” snowpack, and as a result, avalanche danger is often greater and more unpredictable in the Togwotee Pass area.

Heading north of Jackson Hole, snowfall increases significantly over the southern half of Yellowstone despite a more gradual rise in elevation compared to traveling east toward Togwotee Pass.

The most noticeable drop-off in Yellowstone snowfall occurs over the north, where the altitude drops from 7,500-8,000 feet to 6,000-7,000 feet. Mammoth Hot Springs, for instance, averages a more modest 68 inches of snow, which is less than half of the average snowfall at Old Faithful and Yellowstone Lake.

December and January are the two snowiest months of the year on average in Jackson Hole. This does vary each year – for example, February has been a very snowy month in this area in recent years despite being “only” the third snowiest month historically.

In the Tetons, average snowfall quickly increases and peaks in December and January, then only gradually decreases from February through April with even April seeing its fair share of heavy snowfall despite this being the time of year when the mountain snowpack on the ground begins to recede. 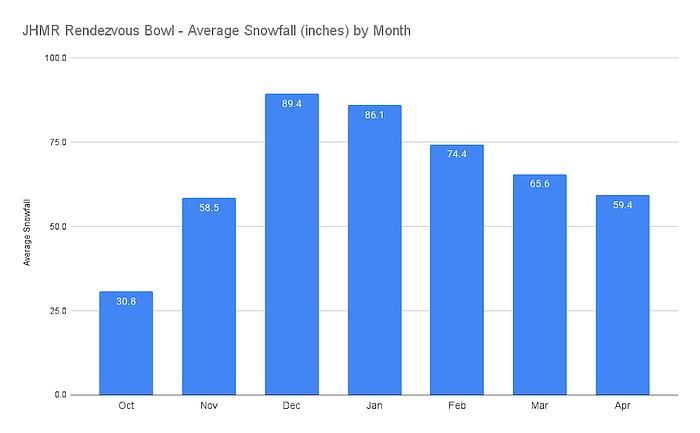 The Jackson Hole Valley and Town of Jackson see a similar peak in snowfall in December and January, with February and November coming in as the next snowiest months. However, snowfall quickly declines in March and April due to warmer temperatures and longer days, both of which make it more difficult for snow to accumulate on the valley floor. 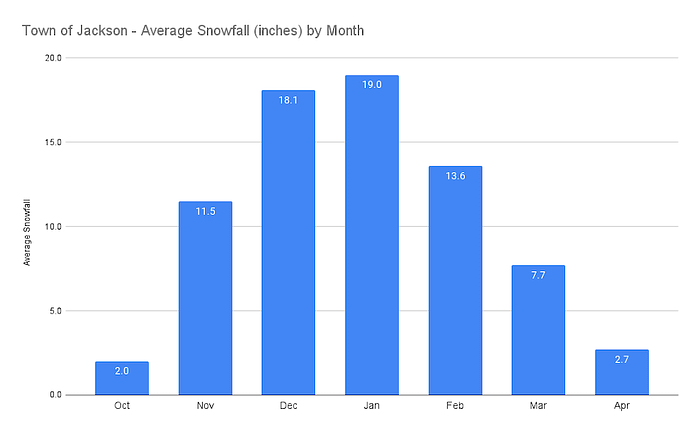 Togwotee Pass is the one oddball in Teton County when it comes to snowfall distribution. Average monthly snowfall at Togwotee Pass is very similar from November through April, and in fact, April is the snowiest month on average by a small margin. Why is this? 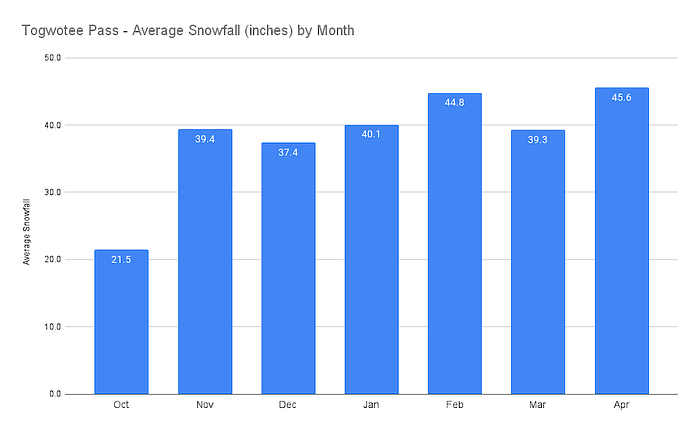 During the mid-winter months when the jet stream is the strongest, storms that pass over the Tetons and Yellowstone lose a lot of their moisture and Togwotee Pass will see more modest snowfall amounts as a result.

However, in March and April (and to a lesser extent, the fall), the jet stream tends to weaken some and this allows for storm systems to occasionally cut off from the main flow.

When these “cut-off” storms pass south of Jackson Hole, winds and moisture will wrap around the center of the storm from the east, and will create an upslope effect on the eastern side of the Continental Divide that can bring heavy snow to Togwotee Pass and portions of Central Wyoming with little to no snow for Jackson Hole.

Average October-April Snowfall in and around Teton County

Despite a mild fall and a slow start to the snow season, snowfall can pick up quickly in December and January, so stay tuned to the Buckrail Weather Report along with weekly weather articles for the latest on snow and winter conditions for recreation and travel.