JACKSON, Wyo. – We’re in our last stretch of warm and dry weather before a winter pattern emerges later this weekend and into next week. High clouds are already on the increase on Friday, but it will be another mild day otherwise with highs in the low 60s. Winds out of the south/southwest will gust to 25 mph this afternoon in the valley, and up to 40 mph across the higher elevations.

Saturday is looking mostly cloudy and breezy but also dry for most of the day with highs in the 50s ahead of an approaching storm system. Showers will eventually arrive by late afternoon/early evening and snow levels will start out as high as 10,000 feet. Snow levels will steadily fall during the evening as widespread precipitation develops, but it could be close to midnight before rain changes over to snow in the valley.

The heaviest snow will fall overnight Saturday night with light snow continuing through most of Sunday as colder air settles in. Overall, I’m expecting 5-10 inches of snow in the Tetons from Saturday night through Sunday, with anywhere from a trace to 3 inches in the valley depending on when the changeover from rain to snow occurs.

This is an interesting setup because storms arriving via southerly flows can lead to big dumps in the Jackson Hole Valley, but I don’t think the cold air will arrive soon enough for that to happen in this case, and by Sunday we’ll be back into more of a westerly flow.

On Monday, we will see a bit of a break with cold temperatures and occasional snow flurries, but perhaps also some breaks in the cloud cover. The next storm will then arrive from the northwest on Tuesday and Wednesday, bringing another round of snow to the area. A stronger storm will also be possible next weekend (November 13-15 time frame). 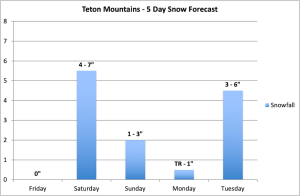 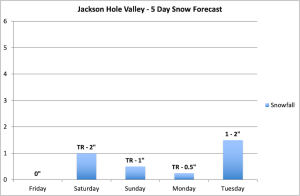