JACKSON HOLE, WYO – A man named Patrick Starich has taken it upon himself do the impossible. He says he wants to talk the Post Office into home delivery in Jackson Hole. The same Post Office that has been called into town hall twice in the past decade to explain why they can’t find us when our box number has been inadvertently left off a package.

The relationship came to a head last Christmas season when, after promising town officials they would try harder, the Post Office then posted at least 20 stern-looking notices throughout the Maple Way facility stating in no uncertain terms that incoming mail needs a PO Box or else.

So along comes Starich and he’s not looking to rock the boat just to be a rabble-rouser. He’s got data. He’s done the research.

Starich makes a compelling case for home delivery in Jackson using empirical evidence. He petitioned the Jackson town council last fall to help him by forming an action group or task force to look into the possibility of home delivery.

The community last took a vote on the matter in 1979 when population was half what it is today. Supposedly, a majority residents stated they wanted to go to the Post Office because it provided a chance to mingle, catch up with old acquaintances, and provide a general sense of community. That’s the way it’s remembered, anyway, nearly 40 years later.

Not much has been done since, but yesterday, at a regular meeting of the town council, Jim Stanford declared he was going to enlist Starich and anyone else who’s had it with status quo at the PO and see what he could dig up.

From the Starich presentation:

Return to Sender: a True and Sad Story

Perhaps the most frustrating part of not getting home postal delivery in Jackson is explaining it to parents, Amazon, and other potential shippers. To this day, my mom has still not fully grasped the fact that I don’t have a mailman and UPS doesn’t know what PO Box 12613 is.

As many before I have pointed out, ad naseum, the problem with not getting home delivery (other than the inefficiencies of everyone driving to the Post Office instead of one theoretical person driving to you) is what happens when you are expecting a package that will never come.

In an isolated mountain town like Jackson, Amazon (et al) is our Walmart. We do a lot of shopping online so we get a lot of deliveries. And sure, these are First World problems but it’s vexing nonetheless when the online order form simply will not accept a PO Box no matter how skillfully you attempt to disguise it, or a package you were assured was to be delivered UPS or Fed Ex, gets handed off to the Post Office for the dreaded “last mile” of delivery.

In Jackson, the USPS idea of last mile is “lost pile.” Without a PO Box to cross-reference with your physical address, well, start cueing Elvis Presley, it’s “Return to Sender,” address unknown. This, even though in order to obtain a PO Box you must submit your physical address in a form. They obviously have the makings for a database. They just aren’t using it.

Case in point, the following is a real-life scenario that just happened to me.

First, a few ground rules. This is by no way meant to be disparaging to the local Post Office employees that work in this valley or any of the others on the front line. They do their jobs to the best of their abilities within a framework of red tape and systemization last updated in the Jurassic Age.

Any perceived jab at the US Postal Service is aimed at the higher ups and the federal bureaucracy that bogs down a 225-year-old institution that has seen better days even during the Pony Express runs through hostile territory. The USPS lost some $2.7 billion last year. It is already $1.3B in the hole for the 1Q of 2018.

Also, I am not advocating for home delivery. I don’t care one way or the other. I just want a package to arrive in less than triple the time it used to take in 1885 Jackson Hole.

Is this what they call “Mailware?”

This wasn’t supposed to happen to me. I’ve been here long enough to know better (1997). I always include my PO Box somewhere on every shipping label. Sometimes as the secondary line where apartment numbers and the like go. Sometimes right there next to my name. When an automated form spits back my address because of the PO Box, I use POB 12613, PO12613, or simply #12613. As long as the five-digit number is on there somewhere the folks at the post office usually figure it out.

I always do this. Except when I didn’t. A package coming from Australia for an order placed on March 15 had already been turned back once. I reordered, but since the original delivery attempt two months ago, I had moved. I provided the new physical address and much to my worry I did not include a PO Box as the shipper insisted, “100% guaranteed, mate” that the package was coming UPS.

Ah, what a difference a letter makes. They shipped it USPS. Is that what they meant? Who knows? At any rate, after waiting nearly three months for this package, a tracking number showed yesterday it was “undeliverable” in Jackson. That’s all. No further explanation.

I called the Post Office. What should I do? No problem, they said. Paste the tracking number into their handy website, select ‘INTERCEPT A PACKAGE,’ and reroute it to your PO Box.

I was flabbergasted to learn the Post Office has actually entered the New Age with a website and functional online tools.

“Your package could not be intercepted. Would you like to try another?”

A call back to the Post Office was reassuring. When asked what the physical address was I had tried to ship the package to I was told mail delivery does go there. In all likelihood my package was on the way straight to my door. Imagine the convenience!

Not believing I could have such luck I staked out the mailbox. The mailwoman came and had nothing for me.

“We don’t deliver to your address anymore,” she said. “The box was getting too full.”

The helpful lady suggested I visit the Post Office on Maple Way and drop her name. Apparently it was possible for someone to dig through the mail and grab my package before it headed to Salt Lake and then back to Australia.

I raced to town through three construction projects and, after the standard 25-minute wait in line, I explained my predicament and asked if the parcel could be located by an employee.

“No, you are not authorized.”

My package was sitting in a bin in the secret backroom, just a few dozen feet from its intended recipient, after finally making it to America 11 weeks from the date of purchase.

But, alas, it would have to be loaded onto a truck headed for SLC in an hour where it would then be returned to the shipper.

Of course. Because, if you are the Post Office, the best way to go about losing $14M every day is to intentionally resend a package back halfway around the world on your own dime to teach me a lesson rather than let me grab it out of the “undeliverable” bin. 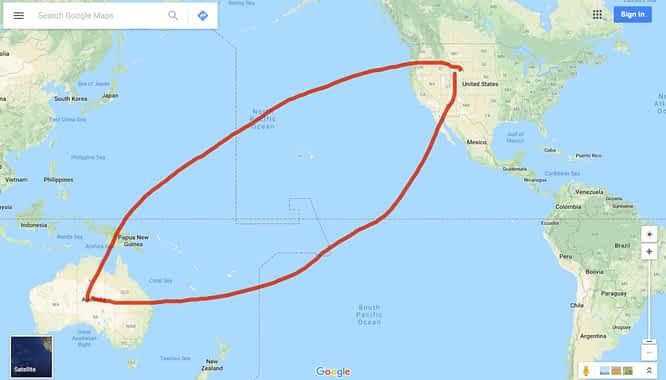