Kent's Korner store in Kelly, Wyoming. Once simply referred to as the "Bridge," by 1914 Kelly boasted several entrepreneurs who had located businesses in the area. Among them were the Grovont Mercantile, the Riverside Hotel, and a blacksmith shop. In October, the Postal Service authorized a post office at Kelly. Ben F. Goe was the first postmaster. For a time, the community had a sawmill until it was purchased and the machinery removed in 1918. By 1921, pioneer Albert Nelson owned a feed stable and livery service at Kelly. At one time, the community also possessed a dance hall, which later burned. (JHHSM)

NOT KELLY, WYO – Oh those poor folks in Kelly. They are resilient if nothing else. Don’t judge the community by the way it looks now—a few scattered yurts—writer and artist types sprinkled about at the end of a lonely stretch of highway that was broken for most of last summer. 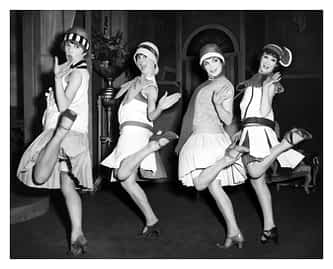 No, remember Kelly for its glory days during the Roaring Twenties. It was then that the bustling city, the epicenter of Mormon Row, almost became a contender. Almost.

But there was the loss at the polls. And then the great flood that wiped the town off the map.

We kid the good residents of Kelly, of course. They probably love their little villa just the way it is and they should. We’re envious, actually. But we’re setting the scene for a time when Kelly rivaled Jackson as a town in Teton County with ambitions of becoming the county seat. They shared the same hopes and dreams and eventual fate of another little town named Big Piney. Provided Rep. WC Deloney could convince state lawmakers Jackson’s Hole Country was worthy of splitting off from Lincoln County, and PW Jenkins could do the same for another potential new county (Sublette), things in Wyoming would be forever changed by the addition of counties 22 and 23.

But we’re getting ahead of our story.

Imagine the time: 1921. It was a jitterbugging year that opened a new era of sustained economic prosperity for America and Jackson’s Hole. The Town of Jackson had just made national news for electing an all-female local government. Even the sheriff was a woman. And they were no fly-by-night flappers. They got things done and were re-elected later by a 3-1 margin.

Still, residents of Jackson’s Hole wanted more control over their valley. Things like a rumored park extension of Yellowstone to include ranchland north of town (Grand Teton would be established in 1929) worried some citizens. They wanted more say in what went on in Jackson Hole.

Representative Deloney listened to his constituents and telegraphed from Cheyenne on February 2, 1921, that he was successful in getting a bill through the House on the way to the Senate that would establish “Jackson Hole County.” The following day the Jackson’s Hole Courier’s headlined screamed: “Jackson’s Hole County is practically assured.”

On February 18, it was a done deal. Governor Robert Carey signed the bill but changed the name to “Teton County,” then he handed the pen to Deloney as a keepsake.

By March, the two biggest questions were: When should a vote be put to the people to officially establish a new county? According to newspaper accounts, some 99 ½ percent of the population wanted to a special election right away rather than wait for the next general election. They didn’t want to have to send their tax money to Kemmerer another year.

“Where should the county seat be located?” was the other question. 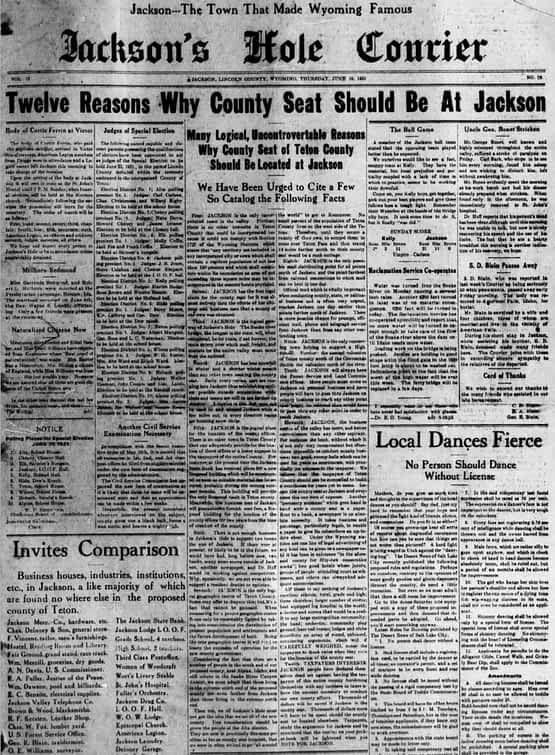 Jackson had the inside track to be the county seat. Besides being the only incorporated town in the valley (it still is), having done so in 1914, Jackson also benefitted from a bias editor at the Courier. A frontpage news story in the paper titled: “Twelve reasons why county seat should be at Jackson” pulled no punches. Reason No. 4 was amusing. “Jackson has less snowfall in winter and a shorter winter season than any other town seeking the county seat.”

The vote was held June 25 and the Kemmerer Camera was first with the results days later. “Jackson wins Teton Co. seat,” read the headline. The decision to actually go ahead and form the new county was a slam dunk. The vote went 700-99 in favor.

The vote for Jackson over Kelly was closer. In fact, the Camera called it “one of the closest elections ever experienced in the town of Jackson and the entire Jackson’s Hole country…”

The paper reported the final tally as Jackson 471, Kelly 384. Slide, Teton, Elk, Alta, and Kelly all voted for Kelly to be the seat. But Jackson and Wilson went heavily in Jackson’s favor, the paper reported.

On June 30, 1921, the Courier printed a different set of poll result numbers that showed the vote much closer: 424 for Jackson and 402 for Kelly.

“A good many people will have to take their hats off to the Kellyites for they waged a ‘rip snortin’’ fight and sprung a big surprise,” the paper wrote.

An interesting side note was an advertisement placed right next to the frontpage story from the Jackson State Bank offering a $50 cash reward for the arrest and conviction of anyone found to have started rumors that bank officers influenced the election by coercing their customers to vote for Jackson and against Kelly.

Meanwhile, down south, the Pinedale Roundup reported 1,200 votes cast in its election to establish Sublette County. The vote for county seat was even closer there. After initially declared a tie between Pinedale and Big Piney at 473 votes each with one precinct yet to be accounted for, a recount of the Kendall precinct showed Big Piney carrying the decision by just four votes. In the end, after yet another official recount, Pinedale was declared the county seat—Pinedale 488, Big Piney 482, and Daniel 230.

In Jackson, commissioners gathered in mid-July to report their official vote tally. This time they had Jackson the victor in the race for county seat by a 426-405 margin. Twenty votes from Precinct No. 10 (Alpine) were tossed out after the town was declared not part of the new Teton County.

Fat lady yet to sing

Teton County was far from a done deal, however. Rumors of at least 100 people in Kelly forming behind an attorney named RR Rose to contest the election were already swirling. The Courier advised its readers in an editorial on July 14 to “Think it over and give Mr. Rose his passport to Kemmerer.” The paper’s following edition a week later carried the news that Rose was indeed suing in District Court to have the vote overturned on legal grounds.

In that same issue of the Courier, July 21, 1921, Kelly resident AL Corey penned one of the most scathing Letters to the Editor ever written in Jackson Hole. Corey said he was writing to inform the people of “what kind of stunt you Jacksonites are trying to pull off down there.”

A rebuttal of sorts was penned by SN Leek on September 1, 1921 imploring residents to remain vigilant about county division from Lincoln for the sake of fighting against “park extension” that threatened some 75,000 acres of taxable, cattle grazing land in now-Grand Teton NP.

Things were finally settled in 1923 when the State Supreme Court upheld both Teton and Sublette county elections and the choice of county seats. It was official.

As for Kelly, defeat at the polls was soon followed by a catastrophic flood that all but erased the town from memory.

In the book A Place Called Jackson Hole, historian and author John Daugherty tells it this way:

“By 1926, Kelly had a population of 50 people, stores, a hotel, a garage, a blacksmith shop, a livery stable, telephone service, and daily mail delivery to the post office. A school and Episcopal Church were also located in the village. The town even had taxi service, provided by Walt Spicer who owned the garage. A year later, there would no longer be a village of Kelly.”

After a landslide in 1925 dammed the Gros Ventre River, creating Lower Slide Lake, that dam failed in May 1927, killing six and destroying every structure in Kelly except the school, church, and parsonage. Forty families were displaced and an estimated $500,000 in damage was incurred. Kelly would never be the same.