JACKSON HOLE, WYO – Town officials opted to move forward with first step toward the creation of a public park in Karns Meadow. A Memorandum of Understanding (MOU) will be prepared between the town and the Jackson Hole Land Trust that will stake out the process moving forward. The Land Trust has offered to pay for an Environmental Analysis (EA) on the 41-acre parcel to help identify the impacts of proposed improvements to the meadows.

The town entered into a buy-sell agreement in 2004 with the Karns family to purchase the property for $5.5M. The Land Trust also kicked in a million dollars for the right to attach conservation easements. The original buy-sell agreement did not require but allowed future improvements like pathways, benches, and other park amenities.

Pathways coordinator Brian Schilling told the town council Monday that planning staff has been working off-and-on about something with Karns Meadow for the past 5-6 years. Councilman Bob Lenz followed that with an apology to the Karns family that it’s taken government 16 years to do anything with the property that the Karns say always they envisioned would be shared with the public.

Even after an EA is done, a question of where money will come from may slow any proposed development in Karns Meadow. Schilling admitted to losing out on a couple of federal grants for inactivity. Town manager Bob McLaurin said there is nothing in the CIP (Capital Improvement Plan) budget looking out 10 years that could be devoted to Karns. Parks and Rec has been contemplating budgeting for Karns in its five-year CIP. 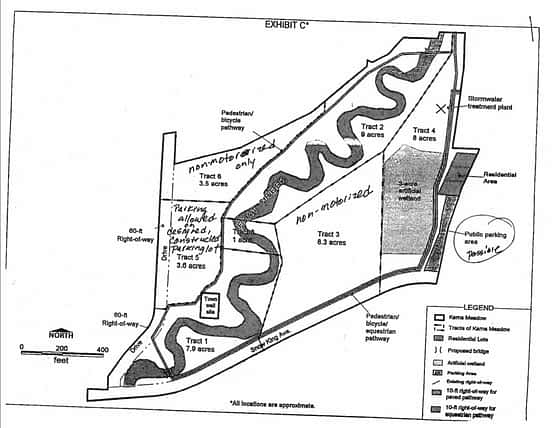 Public concern over proposed changes to Karns Meadow has come from some neighbors. A public citizen group, Friends of Karns Meadow, organized by Loren Nelson, has also spearheaded resistance to development in the meadow.

“Karns Meadow is an environmentally sensitive parcel of land that is the single, last, natural, (almost) undeveloped land in central Jackson. It is the only remaining prime natural habitat that allows wildlife movement and migration between the national forest and East Gros Ventre Butte and the Highway 22 corridor to Teton Pass. The land is essential to wildlife,” Nelson stated. His group maintains proposed improvements to Karns Meadow are not needed, are not being demanded for by the public, and would cause irreversible harm and disruption to pristine wetlands.

Wildlife biologist Franz Camenzind asked the council to strongly consider the ecological and environmental value of the meadow. “What is the urgency with this?” he asked. Camenzind further warned, “As soon as you start putting development into a small area like this 41 acres, there will be degradation. Ecological value will go down.”

“We have known for decades that this meadow functions both as destination habitat and as a critical connection corridor. And we know that it is during the most severe winters that wildlife, particularly deer and moose depend most upon this meadow for refuge, seclusion and nutrition,” Camenzind added. “The very first sentence on the first page of the Comprehensive Plan begins with this visionary sentence: ‘Preserve and protect the area’s ecosystem in order to ensure a healthy environment, community and economy for current and future generations.’ Are we doing that?”

Supporters, however, included the property’s former owners. Pete Karns offered public comment via a letter to the editor he wrote explaining that it was the family’s understand and vision all along that the meadow would be made a place for the public to enjoy and interact with wildlife.  “We wanted the park to be usable by all of the community and not just a wildlife refuge for people to look at,” Karns wrote.

Pete’s daughter Jenny Karns also spoke at the Monday meeting, telling the council, “This was my inheritance and now it’s yours. [My dad] has been very gracious in allowing 15 years go by without a park in place. I’m an environmentalist but not an obstructionist. We propose a natural path for people to go down into the park away from the hubbub of Jackson.”

Karns added that soon more people will be accessing the meadow from the 90-unit Sagebrush Apartment complex slated for Broadway and a “hard copy of what’s possible” should be in place for the property’s use by then.

Jim Stanford said he had concern over the process.

“With an EA, you go into it with a specific project in mind. Here you have a general list of different directions you might go. Should we identify what it is we would like to do?” Stanford wondered.

Town/County planner Tyler Sinclair assured the council the proper first step is an Environmental Analysis to figure out what can or can’t be done on the property.

Like Camenzind, Stanford asked, “What is the pressing need to do this now? Things allowed in theory. Why are we to hop to it right now when out Capital Improvements Project budget is hampered with items like the landslide?”

Schilling responded that he was not an authority on what the community’s most pressing needs are but it was important to at least get started with some preliminary planning given that anything on the ground would be multiple years out.

“Personally, I think the greatest public benefit is preserving as much natural in the meadow as possible. That said, I’m open to the idea of a path,” Stanford said, adding that he would like to see a friendly amendment that would have the town pay the $3,000 for the EA rather than take the Land Trust’s money.

Don Frank said it is prudent to get the science first. He had no issues with letting someone else pay for it, feeling the study itself would be objective.

“Sympathies almost always lean toward preservation whenever possible. How many families do not have the luxury of going to Grand Teton National Park?” Frank said. “We underserve our citizens by not being welcoming and inviting. One result of this would be folks will understand that this is public land.”

Hailey Morton Levinson said she has heard the community’s concern about potential “over-development” in the meadow but agreed it was important to get the science with the EA which “is not committing us to anything,” she said. “Concerns and fears we’ve heard can be addressed later.”

Mayor Pete Muldoon said. “I think Karns is great the way it is. But we have an obligation to get the best science and information to have a better discussion. I look forward to having that informed debate.”