Wyoming continues to rebound from the severe downturn in 2015-16 but the pace slowed somewhat in after the first quarter of 2019. Total employment grew by 1.2 percent (3,570 jobs) in 3Q 2019 as compared to the previous year—slightly slower than the national average. 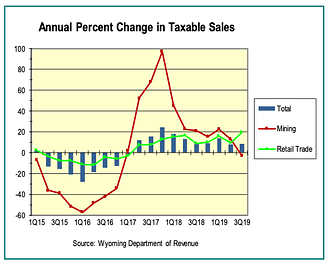 According to Moody’s Analytics, global GDP growth is expected to slow to 2.4 percent in 2019 from 3.0 percent in 2018. The slowdown will be broad-based across countries. The main drivers are a significant easing in China’s growth and fading fiscal stimulus in the U.S. economy.

In addition, the trade war has not only hurt Chinese and U.S. activity, which depressed global demand, but it has also taken a heavy toll on business confidence across the globe. The lower confidence has translated into jitteriness of financial markets and lower investment, particularly in manufacturing.

In response, many central banks, led by the Federal Reserve, tried to get ahead of the curve by easing monetary policy before the weakness becomes entrenched and before it is too late.

Analysis prepared by Wyoming Chief Economist Dr. Wenlin Liu, suggests employment in the mining industry continue to drag the state’s numbers in the wrong direction. Some 670 jobs were shed in coal, oil, and gas extraction since 3Q19. 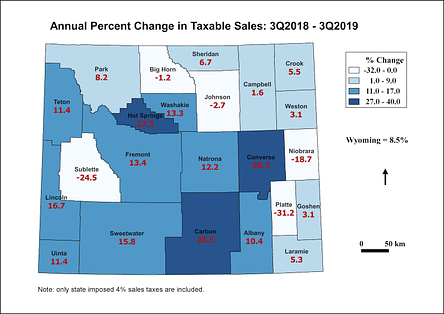 The statewide home price increased 5.2 percent in the third quarter of 2019 from one year ago, lower than the pace for the previous quarter, while the national average price appreciation slowed down to 4.9 percent during the same period.

Best of Jackson Hole   17 hours ago