JACKSON, Wyo. — We have enjoyed a beautiful fall in Jackson Hole so far this year, and that trend looks to continue as long as you don’t mind a few chilly days ahead during the middle part of the week.

Fall colors are right around peak this week around Grand Teton National Park and Northwest Wyoming. Check out the colors from this past Saturday, September 25. 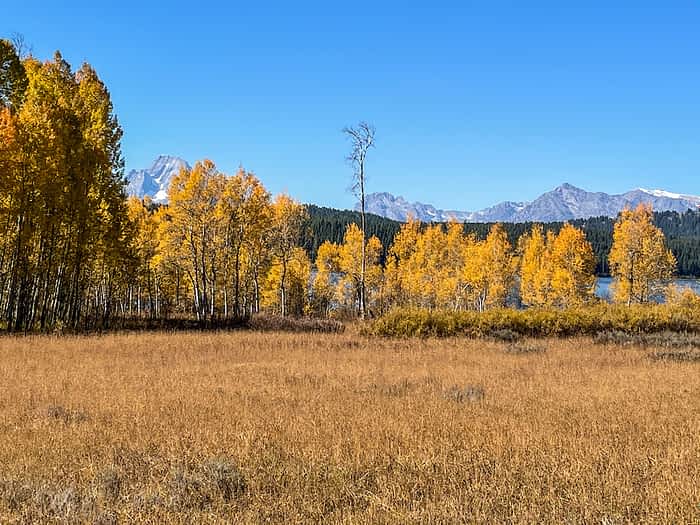 We have had several days in a row with highs in the 70s in Jackson, and as of this writing, the high in Jackson has reached 79 so far on Monday afternoon. The cold nights and warm afternoons have been very pleasant, and our afternoon temperatures have actually been above average.

“Average” temperatures quickly drop in September, and as of September 27, the average high in Jackson is only 67 so we’re running about 12 degrees above average. However, low temperatures have been near if not below average recently due to high pressure and dry conditions in place, resulting in large temperature swings between day and night.

Monday will almost certainly be the last day we see temperatures in the 75-80 degree range until next year. Cooler temperatures are ahead for the remainder of the week, but significant precipitation and mountain snow will hold off, and the window for high elevation hiking will remain open as a result.

A little bit of smoke has arrived from California fires as of Monday, contributing to hazy skies. However, the smoke levels are much lower compared to what we saw at times this summer and air quality has remained in the “Moderate” category. Also, the light smoke is expected to clear out on Tuesday.

A storm system is approaching from the Pacific early this week, but will split apart before reaching our area with most of the moisture and energy diving south into Utah and Colorado. As a result, precipitation will be minimal at best for Jackson Hole, but the cooldown will be noticeable over the coming days.

A cold front will arrive on Tuesday morning with gusty southwest winds expected throughout the day on Tuesday along with much cooler afternoon temperatures. Highs will only reach the low 60s in the valley with winds gusting up to 25-30 mph in the afternoon. Over the higher peaks, southwest winds will gust as high as 35-40 mph.

Clouds will increase behind the front on Tuesday afternoon and evening and with cloud levels low enough to obscure the Tetons and surrounding ranges at times.

However, moisture will be limited with just some isolated light showers/sprinkles at the most. Above 9,500 feet, snow flurries will be possible but only light dustings should be expected over the higher peaks if anything. 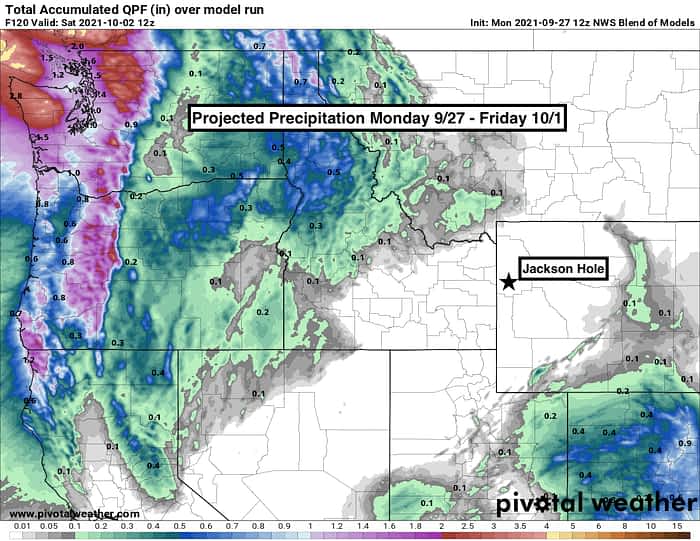 Conditions will dry out on Tuesday night and into Wednesday, but temperatures will remain chilly on Wednesday with highs only in the 50s in the valley under partly cloudy skies. Winds will be much lighter on Wednesday, however, with a wind direction out of the west/northwest.

A dry and sunny pattern will resume from Thursday through the weekend with chilly temperatures giving way to a gradual warming trend as a ridge of high pressure builds over the Western U.S. 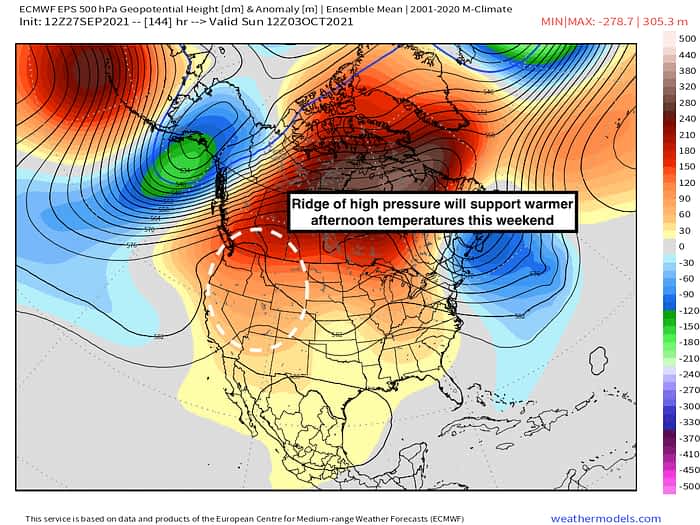 Temperatures on Thursday morning will dip into the upper teens in the valley before warming up into the low 60s for afternoon highs.

Friday will be warmer with highs in the mid-60s, followed by highs in the upper 60s to low 70s on Saturday and Sunday. Mostly sunny skies and light winds will contribute to the pleasant conditions through the weekend as well. In other words, get out and enjoy! Nights/mornings will remain chilly, as should be expected at this time of year.

A mild, dry and sunny pattern is likely to persist through at least the middle of next week. Looking farther out, there are some signs the pattern could turn more unsettled by late next week and into the weekend of October 9-10.

However, confidence is low at this time as long-range models are in poor agreement, and it’s also possible the nice weather could stick around for a little longer.

While we could certainly use more moisture this upcoming winter, now that fire season is winding down locally, an extended mild and blue-sky “Indian summer” would be welcome after dealing with smoke for most of July and August! 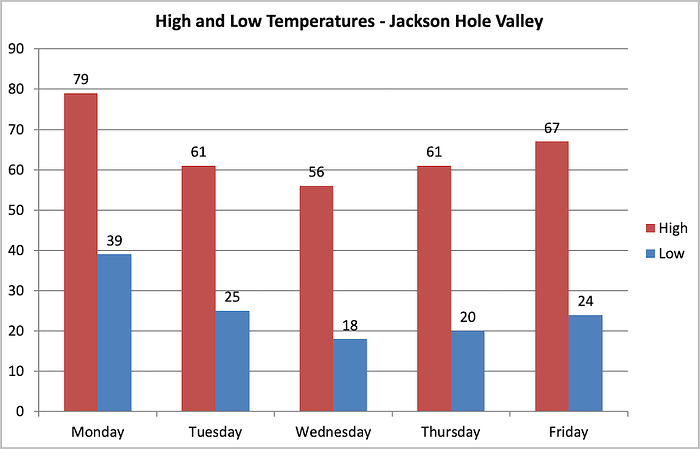 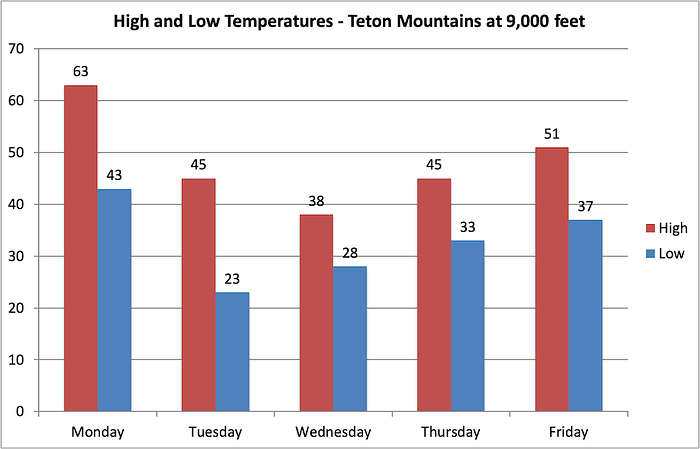 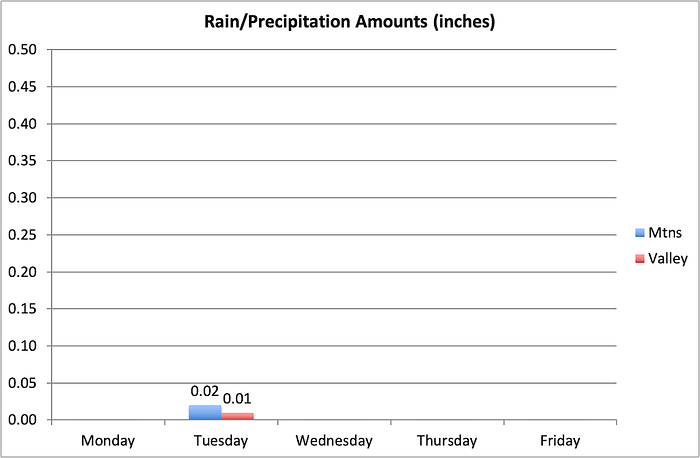 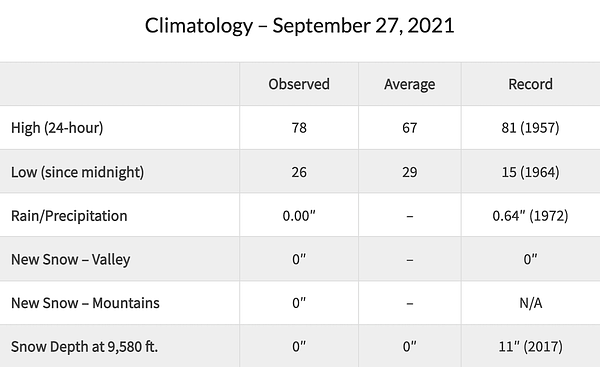