Snow cover over Togwotee Pass on Sunday morning after the most recent storm. The next storm will favor areas along and east of the Continental Divide from Sunday night through Wednesday morning, and Togwotee Pass being right on the Divide could see significant impacts.

JACKSON, Wyo. — A powerful early seasons storm system will result in the first significant snowfall of the season for many areas in Wyoming and Southwest Montana from Sunday night through Wednesday morning.

Jackson Hole will only see a glancing blow with this storm, but cold temperatures by mid-October standards will arrive during the middle of the week along with the first valley snowflakes of the season.

A significant storm system late last week produced over an inch of rain in the Jackson Hole Valley and up to 10 inches of snowfall (not factoring in melting/compaction) in the Teton Range above 9,000 feet.

This next storm will be more significant for areas north and east of Teton County, so be prepared if you have travel plans outside of the area.

A nice break in the weather pattern will occur through the daytime hours on Sunday with a mix of sun and clouds and chilly temperatures. If you need a good travel window, this would be the time to do it.

A strong low-pressure system will move into the Pacific Northwest and Northern Great Basin with southwest winds transporting moisture into Northwest Wyoming and Southwest Montana.

However, impacts will be much higher north of Jackson Hole. This includes Yellowstone National Park where heavy snow and poor travel conditions are expected from Sunday night through Monday night. Southwest Montana looks to get hit even harder, including the Bozeman area.

Winds will begin to shift to an unfavorable easterly direction on Monday evening. We may see a few last gasp bursts of showers arrive in the evening, but then the drier east winds will eventually cut off most of the precipitation west of the Continental Divide in Jackson Hole.

Snow levels will lower to 6,500-7,000 feet or so in Teton County on Monday night, and some snowflakes down to the valley floor in the Town of Jackson couldn’t be ruled out, but precipitation may be ending too soon before this could happen.

Winds will actually become quite gusty out of the east on Monday night, and relatively milder air will keep temperatures from dropping much over Teton County during the overnight hours.

Areas east of the Continental Divide will start to feel the brunt of the storm with heavy snow and lowering snow levels, and Yellowstone and Southwest Montana will also continue to be impacted due to converging winds. 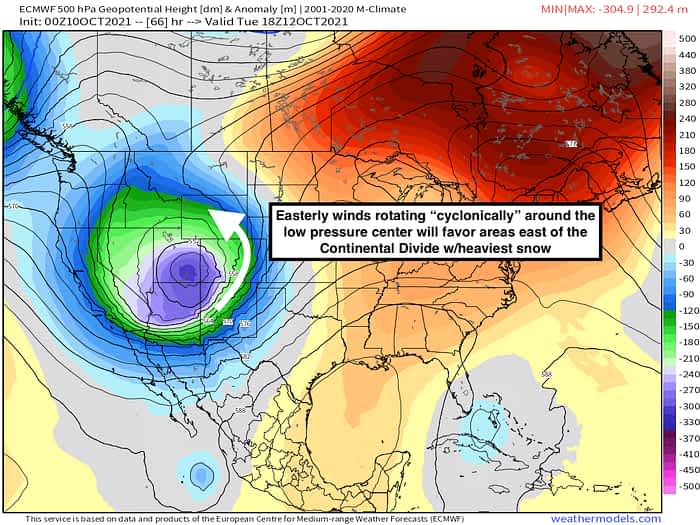 Gusty easterly winds and drier conditions will prevail during the morning hours on Tuesday across Jackson Hole. Heavy snow will continue to fall along and east of the Continental Divide in Northern and Central Wyoming, including lower elevations such as Lander, Riverton and Casper.

The Absaroka, Beartooth, Bighorn and the eastern Wind River Range will receive the heaviest snowfall totals, likely in excess of a foot over the higher elevations. The storm will begin to relent over Southwest Montana and western/central Yellowstone (eastern areas including Yellowstone Lake and Sylvan Pass will continue to see snow, however).

Meanwhile, in Jackson Hole, a fairly strong cold front will arrive on Tuesday afternoon and we could see valley temperatures down into the 30s before the day is over.

Check out the snowfall projection below from a blend of weather models. Note that the projection for the Tetons and Jackson Hole is way too high as the models are likely underestimating the impact of the easterly winds on Monday night. The projections look more reasonable north and east of Jackson Hole, however. 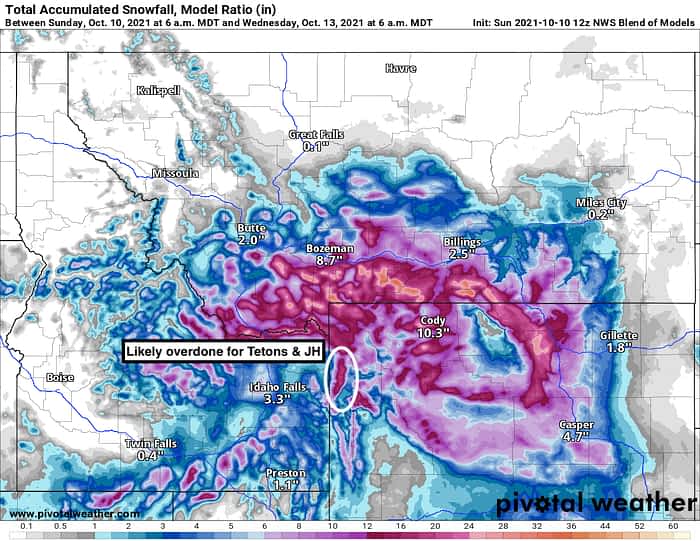 The heavy snow in Central/Northern Wyoming will taper off by Wednesday morning. Meanwhile, n Jackson Hole, much colder air will settle into place with valley highs only in the 30s on Wednesday and Thursday and highs in the low 20s at 9,000 feet.

Also, a weaker disturbance will arrive from the west/northwest bringing cloud cover and periods of light showers from Tuesday night through Thursday. Snow levels will easily be down to the valley floor in this much colder airmass, so while precipitation doesn’t look heavy, the Town of Jackson should see its first snowflakes of the season fly.

The Tetons could pick up an additional couple of inches of snow during this timeframe, and the snow will be drier and more powdery with colder air in place. The valley will have trouble seeing any snow accumulate due to light snowfall rates, and little more than some localized dustings should be expected at this time.

The good news is that the end of the week and next weekend (October 16-17) is looking much nicer with dry conditions, sunny skies and warmer temperatures. We should see highs well into the 50s in the valley next Saturday and Sunday. The dry and sunny pattern should continue through the early part of the following week as well. 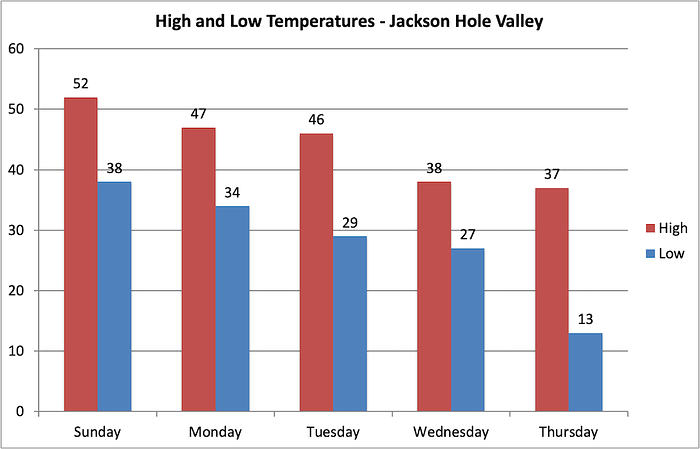 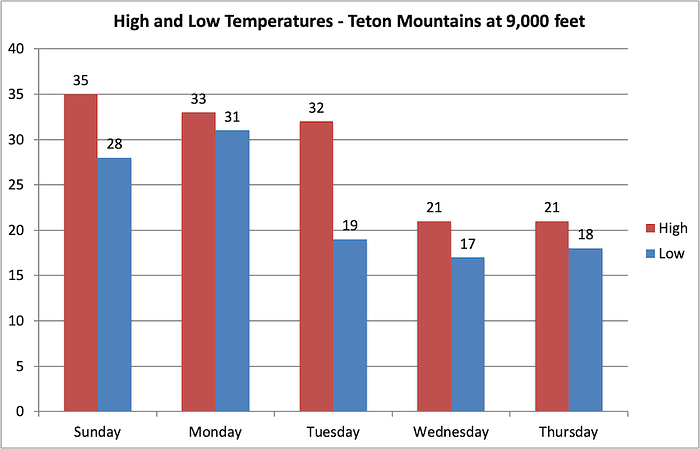 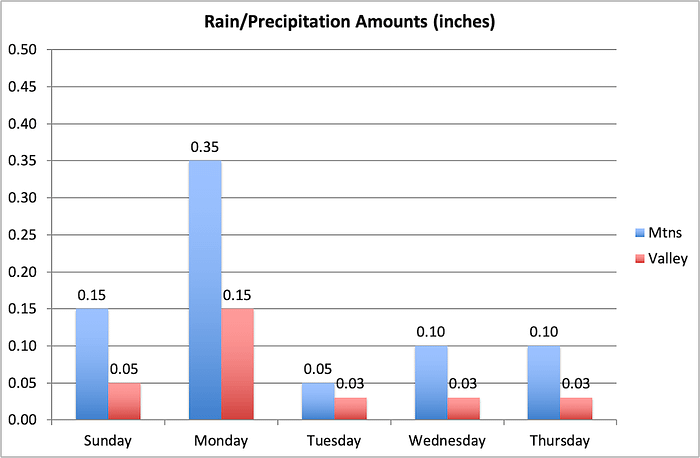