JACKSON HOLE, Wyo. — The three words that best describe the malodorous conditions yesterday in east Jackson are as follows, and we quote: “Stink, stank, stunk.” 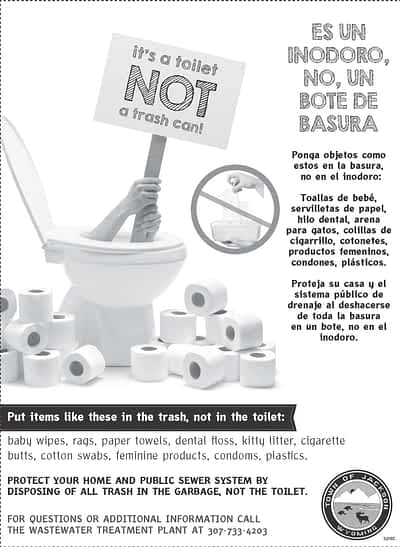 With all respect to Mr. Grinch, who was found not responsible, the septic smell experienced by many in the heart of Jackson was found to be a blockage in the municipal sewer system blamed on flushable wipes.

Public Works crews reported the blockage, caused by wet wipes, cleared itself sometime between 4:30 and 5:00 p.m. on Tuesday, December 17. When the blockage cleared itself, there was a surge in flow that caused stagnant sewer gases to flow up and out of manholes. The result? Jackson stank. Or is it stunk?

Not all wet wipes are flushable. In fact, very few are. New standards adopted recently require a seven step process for a personal use wipe to be considered flushable and earning a GD4 label. If your wipe is not GD4 compliant, it should not get flushed down the toilet.

The Town of Jackson is urging everyone to spread the word: Please don’t flush wet wipes—even those labeled septic safe and “flushable.”