With vaccines rolling out and after checking in with the various governmental entities, TVF has announced that Music on Main is back on for 2021! Photo: Teton Valley Foundation

TETON VALLEY, Ida.  — For both Teton Valley Foundation (TVF) and the community, it was heartbreaking to hear of the cancellation of last summer’s series, and TVF has been waiting and hoping for almost two years for this moment. With vaccines rolling out and after checking in with the various governmental entities, TVF has announced that Music on Main is back on for 2021!

TVF is committed to the health and safety of the community and is working on a COVID protocol, which can and will be adjusted based on current Federal, state and local guidelines as the first show nears. As with other large community events, TVF  is moving forward with the final planning of the series and will stay cautiously optimistic that everything continues to move in a positive direction so the community can all gather in Victor City Park again this summer!

Teton Valley Foundation is kicking off the eight-week free live music showcase with a bang. Head to Victor City Park on Jun. 17 for a night of music that’s a little bit funky, a little bit rock, and a whole lot of soul: The Broadcast. Fronted by powerhouse vocalist Caitlin Krisko, The Broadcast is a psychedelic soul-rock band hailing from Asheville, North Carolina. Produced by members of Tedeschi Trucks Band, The Broadcast steps into the arena of rock and roll night after night, delivering some of the most electrifying live shows today. Caitlin Krisko’s sweeping lead vocals range from a whispered hush to a lioness roar, captivating audiences across the United States and Europe. 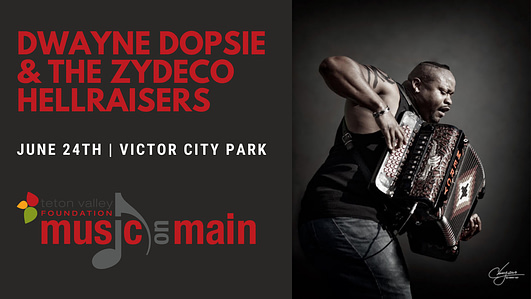 Few genres bring the good times quite like the Louisiana stylings of Zydeco music, and Dwayne Dopsie is dishing it out in spades. 2018 Grammy award nominee and “America’s Hottest Accordion” winner, Dwayne Dopsie plays high-energy zydeco that keeps you wanting more. Dwayne hails from one of the most influential Zydeco families in the world. Although inspired by tradition, he has developed his own high-energy style that defies existing stereotypes and blazes a refreshingly distinct path for twenty-first-century Zydeco music. “Dwayne takes the instruments and traditions of zydeco to new levels infusing blues, soul and funk with a driving rub-board rhythm. The Zydeco Hellraisers’ sound is relentless, pulsating and funky, easily appealing to fans of all genres,” said the Toledo City Paper. This singer/songwriter and accordionist has performed in 40 countries and also in hundreds of cities across the United States, Europe, Brazil, Panama and Canada since debuting his band at age 19.

Cancel any other plans, Teton Valley. There’s one place to be on Jul. 15. Trust us, you’ll want to be able to say “I saw Jackie Venson when…” A singer-songwriter and guitarist from Austin, Texas, Jackie Venson is known for her sizzling guitar skills and equally has impressive vocal chops. A graduate of the Berklee College of Music, Jackie Venson has ignited the Austin music scene with memorable performances at Live in Texas, Austin City Limits, NPR’s Live Sessions, and more.

Her music bends genres, falling somewhere between R&B, rock, and soul, with a variety of other dynamic sounds thrown in the mix. She was also the first Black artist to win the coveted “Best Guitarist” title at the Austin Music Awards. And when you hear her play, you’ll surely know why. Her skills on the guitar are undeniable, and her style leans on her Texas roots.

The Austin American Statesman called her an “…astonishing mix of raw soul, superb musicianship and laid back grace…” while Forbes Magazine said, “Jackie Venson is truly an Austin legend in the making.”

Are you ready to groove the night away to sultry vocals and heart-pounding rhythms reminiscent—and maybe even find yourself feeling a little extra inspired? Look no further than on-the-rise band The Commonheart, heading to Victor City Park on Jul. 22. Made up of incredible talent from up-and-coming Pittsburgh area artists, The Commonheart was formed to invoke emotion through tone and energy and feel-good lyrics.

The Commonheart is made up of Abby Gross on the saxophone, Mariko Read on vocals, bass player Anton DeFade, Shawn McGregor on drums, guitarist Mike Minda, Lucas Bowman on keyboards, Nate Insko on the trumpet, and vocalists Kenny Stockard, Michael DeLuca, and Clinton Clegg.

Calling all country music fans! Mark your calendars for Jul. 29. Celebrated Idaho natives Micky and the Motorcars are heading back to their home state from Austin, bringing their alternative country sounds and incredible performance style.

What started nearly 30 years ago at a dancehall in Stanley, Idaho, has spawned into a notable career with one uber-talented family: The Brauns, then a part of The Muzzie Braun and the Boys—a local family band who’d already made it to the Grand Ole Opry, featuring Muzzie’s four young sons, precocious boys with rock-and-roll futures.

August 5: The Ghost of Paul Revere

Celebrate the thick of summer with a performance from The Ghost of Paul Revere, a band known for being a little bit of a lot of things. Country music news website, The Boot, dubbed this Main-grown crew as “not quite bluegrass, not quite country, not quite rock ‘n’ roll, but kind of all three combined.” The Boston Globe called them a “foot-stompin’ holler-folk quartet create the type of music for which festivals are made.” And they are heading to Victor on Aug. 5.

The Ghost of Paul Revere group is made up of Max Davis on vocals and banjo, Sean McCarthy on vocals and bass, and Griffin Sherry on vocals and guitar. The band formed in 2011 and has quickly gone from a grassroots local favorite to national success, sharing the stage with notables like The Avett Brothers, Jason Isbell, The Revivalists, Bela Fleck, and The Infamous Stringdusters, and more. A mainstay back east, The Ghost of Paul Revere are also known for their acclaimed festival Ghostland, a celebration of Maine’s local music community. It has grown over the years to become one of the state’s largest festivals held over Labor Day Weekend.

Get ready for a Grand Finale unlike any other! For the first time in Music on Main history, the season will close out with a must-see doubleheader: Double the epic headliner acts, and double the good times. Make plans to arrive at Victor City Park bright and early—Ryan Shupe & the Rubberband begins promptly at 6:30 pm, followed by longtime favorite Turkuaz. Two ninety-minute sets; two not-to-be-missed acts.

Ryan Shupe has a crossover style that is fresh and unlike any other. He and his band, the Rubberband, put on a great show that is unique, creative, and entertaining. Playing a wide range of instruments and musical styles, the band appeals to rockers, fans of bluegrass, and jam bands across a broad age range. Stellar musicianship, witty lyrics, sing-alongs, and introspective ballads take the audience on a highly energized rollercoaster. With amazing and versatile musicians, Shupe’s original songs are highlighted with hot instrumental solos and tight vocal harmonies. Thoughtful lyrics, rapid-fire vocals, dynamic musicianship and hard-driving arrangements make the live show a sure-fire winner.

Turkuaz is heading back to the Music on Main stage for another larger-than-life performance from this Brooklyn-based nonet. The nine members of Turkuaz compare their blend of sounds to that of Jackson Pollock’s popularized painting style of drip painting in which paint is actively splashed in a myriad of colors on canvas. That’s just what you get from this on-the-rise group: A splash of everything, energetically producing a cornucopia of sounds: funk, alternative, rock, R&B, and psychedelic, the list goes on. Turkuaz is known for balancing male-female harmonies, strutting guitars, wild horn arrangements, and interminable grooves—this spirit takes shape in the color donned by each respective member on stage nightly. 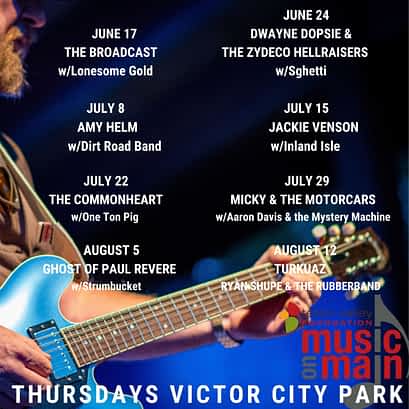