U. S. Army North (Fifth Army) briefed by Blue Team Incident Commander Mark Morales (second from right) at the 2020 #AugustComplex on the Mendocino National Forest in September. Morales is now the IC on the Mullen Fire. Photo: Terry Krasko, USFS

CHEYENNE, Wyo. — The Mullen Fire has grown slightly in the past couple of days but firefighters have been able to keep the megafire from making any big runs despite challenging weather conditions.

The Mullen is now at 170,996 acres with 14% containment. A Type 1 team (Southern Area Blue Team) took control of the fire earlier this week. Mark Morales is the incident commander. He just got off the monster August Complex Fire in the Mendocino National Forest in California. Morales has 1,104 personnel on his team.

The fire progressed slightly to the northeast and east over the last 24 hours. In the face of Red Flag Warning conditions in place for most of the day yesterday, significant structure protection activities took place in Albany County, and other communities threatened by the fire and structure protection will continue to be a priority. This includes moving brush and firewood, laying water hoses, and installing sprinkler systems.

Efforts have continued to hold the line at Centennial. Albany County crews established and strengthened indirect fire lines to slow potential spread towards Centennial, and aerial resources will drop retardant along those fire lines to reinforce them.

Active burning in heavy dead and down fuels is expected today. Weather is expected to be warm and dry with lighter winds from the southwest and gusts up to 20 mph. Afternoon relative humidity levels are forecast to be around 10%. Smoke is expected to be reduced somewhat in the immediate vicinity of the fire and allow increased use of aerial resources.

Winds ahead of a weekend front will be challenging but once again firefighters have an eye on Sunday and Monday as days where the weather could lend a helping hand.

The protection of the Rob Roy reservoir remains a high priority as it is the main water source for the city of Cheyenne. Other values include Wyoming Infrared Observatory. Defensive firing around structures along CO HWY 125/127 corridor.

Ground crews also conducted firing operations in the north above the Savage Run Wilderness in an effort to remove fuels ahead of the fire. 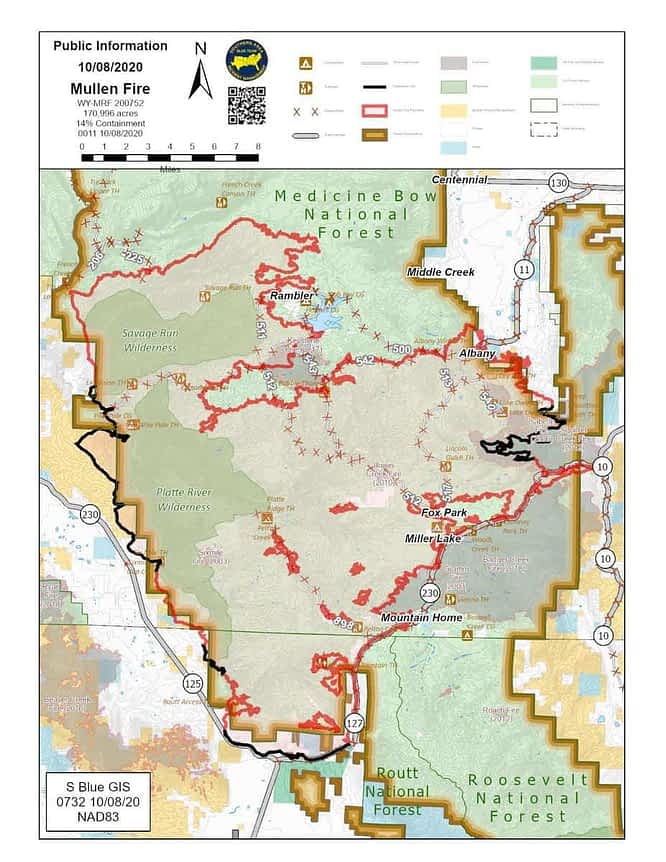