JACKSON HOLE, WYO –  The Teton Raptor Center has been in the news lately as it looks to expand its operation at the Hardeman Barns in Wilson. The iconic property has long been hailed for its postcard setting at the base of the Tetons in the quiet little burg. And that barn—what a beaut!

It felt like a good time to dig into a little of the history regarding the 27-acre parcel that was purchased from the Land Trust this past spring by TRC. Why are they called the Hardeman Barns? Who built that big one? Who owned it before and after the Hardemans?

The property, on the National Register of Historic Places since 2015, has an interesting past. It’s been ranchland, sure, but it has also been home to a private school, the local 4-H program, and was once in the hands of one of the most famous aviators in American history. 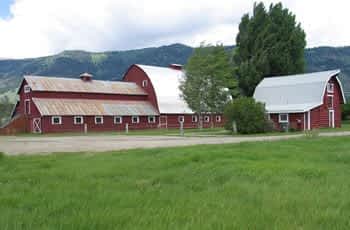 As the settlement of Wilson began at the turn of the 20th Century, George Goodrick patented the acreage now encompassing the Hardeman Barns ranch area in 1905. Goodrick married Katherine Wilson, daughter of “Uncle Nick” Wilson.

Like most ranchers of the era, he grazed cattle and put up hay, selling market livestock in the fall by herding them over Teton Pass. These ranches were mostly small and self-sufficient. The buildings appropriate to these small operations were likewise modest and were often moved about as needs changed.

Not long after Goodrick had arrived in the valley, a Dutch immigrant named Gerrit Hardeman showed up in Jackson Hole around 1910 and began working various ranches as a ranch hand.

By 1919, Hardeman had saved enough money for his own spread. He bought the Charles Davis farm—about a mile south of Ditch Creek northeast of Kelly—for $2,500. It must have been a cash deal because Gerrit’s wife LaMar was always fond of saying the couple never once, in their 55 years of marriage, ever borrowed from the bank.

They planted a crop and Gerrit worked on the side hauling timber and other freight until the couple could save enough for some prized Hereford bulls. After a fire destroyed their barn and all of its contents in 1924, the Hardemans rebuilt and eventually established their herd in 1926.

And what a herd it was. By 1948, Hardeman’s Herefords were among the finest in the state according to one University of Wyoming assessment.

From lows to high-flying times

Meanwhile, as the end of the 1920s approached, the chain of ownership of the Goodrick property in Wilson that was to become the site of the famed Hardeman Barns had worked its way through the family (and at one point part of the Moses Giltner estate) and eventually into the hands of Henry G. Weston and his wife, who took title of the land in 1937.

It was during this period of hard times in the 1930s that the pump house, the bunkhouse, and the east barn were built—and possibly the south part of the big barn as well.

But it wasn’t until Weston sold to a man named Corliss Champion Moseley that the ranch really took the look so cherished today. CC Moseley was a United States Army aviator and later a civilian trainer. He won the inaugural Pulitzer Air Race in 1920. Following his service in World War I, where he was credited with one aerial victory, he was in charge of all United States Army Air Service schools. He was born in Boise and schooled in California.

Moseley moved to Jackson Hole in 1941 and immediately began buying up ranches. Eventually he amassed a patchwork of properties including the Mosely Hereford Ranch, the Charter Ranch in Spring Gulch, the Aspen M (Holbron) Ranch near Teton Village, the Red Rock Ranch in the Gros Ventre, the Hatchet Ranch on Togwotee Pass, and the von Gontard Ranch in South Park that became the polo grounds.

Moseley ran prized Herefords as well, headquartering his operations in Wilson and ordering a barn be built on the property. The iconic, gracefully arching gothic structure referred to as the North Barn that been the visual hub of Wilson ever since it was built in 1943.

Wesley and Andy Bircher designed and built the structure with help from Howard Hardeman. Bircher was a master builder who constructed similar barns up and down Fish Creek including the Delta Q Ranch of Baroness Elena Hunt and the twin barns at the VandeWater Ranch, and as far south as the Trail Creek Ranch.

Moseley didn’t stick around long. He was looking for a buyer right when Gerrit and LeMar Hardeman sold their place near Kelly to the National Park Service in 1956. With 200 head of Hereford cattle to move, the Hardemans bought Mosely’s place and legend took hold.

The Hardeman’s owned and operated the ranch until 1989. With land prices skyrocketing and ranching no longer paying the bills, Earl and Pat Hardeman decided it was time to sell. It was a tough decision.

In fact, Earl told the Jackson Hole Guide in 1986: “If this ground is as valuable as they say it is, there’s no way that I can see that our kids are going to stay here and keep ranching. I hope they are not that dumb. Us old fellows…we’ll probably ride it out, but the kids aren’t going to do it. I mean they’re going to put her in the bank and go on down the road.”

The Hardeman family continued to operate the ranch until 1998 with a 10-year lease in place guaranteeing the Hardemans the right to work the ranch even while plans were underway to find a conservation buyer.

Then fledgling Jackson Hole Land Trust stepped forward and, together with a community-wide effort and $500,000 from Teton County, raised the money to acquire the property in August 1989.

By May 1990, the ranch had a new tenant. A Conditional Use Permit was granted to the Snake River Institute for a private school for the arts, humanities, and natural world. The plan included offices, storage, artist space, and meeting space. The Institute ceased operations in 1998.

Following the closure of the Snake River institute, the Land Trust leased the property to the local 4-H until approximately 2001. The property was then leased to a livestock producer, and the horse barn structure was used as single-family employee housing.

Jennifer Tennican’s “A Treasure Hidden in Plain Sight: The Moseley/Hardeman Barn” tells the in-depth story of the iconic property.