JACKSON, Wyo. — Following a snowy pattern during the first seven days of January, Jackson Hole is now in the midst of another extended dry spell that will take us through about January 20, save for a lone storm on Wednesday of this week.

So far, 2020-2021 has been hit or miss for the Tetons with good storm cycles interspersed with longer-than-usual dry stretches. The snowpack structure is dangerous as a result of these dry spells that have weakened the snowpack.

The Bridger-Teton Avalanche Center has consistently been warning of dangerous persistent weak layers buried in the snowpack, which warrant an extra degree of caution for backcountry travelers as this problem likely isn’t going away anytime soon.

During early January, the Tetons experienced some of their best in-bounds skiing conditions of the season so far thanks to a series of storms that deposited up to 36 inches of snow at Jackson Hole Mountain Resort and 27 inches at Grand Targhee from January 2-7.

Since that time, a ridge of high pressure has become established across the Western U.S. and we are back into a dry spell with stubborn temperature inversions once again. Our snowpack is not in terrible shape… Currently, snowpack is 94% of average at JHMR’s Rendezvous Bowl Plot with a depth of 64 inches, and 90% of average at the Grand Targhee Snotel Plot with a depth of 71 inches.

If we look at the estimated season to date snow depth chart at Jackson Hole Mountain Resort courtesy of OpenSnow.com, which is quite accurate compared to current measurements, we can get a good sense of the season snowpack trend so far.

Jackson Hole experienced a big spike in snowpack during an active pattern in mid-November, followed by dry weather from late November through mid-December, and more frequent storms from mid-December through early January aside from a relatively short dry stretch in late December.

Taking a look at the west as a whole, we can see that Northwest Wyoming’s snowpack is slightly below average. However, we are certainly doing better than areas farther south, such as California, Utah, and Colorado where snowpack is well below average in most areas. 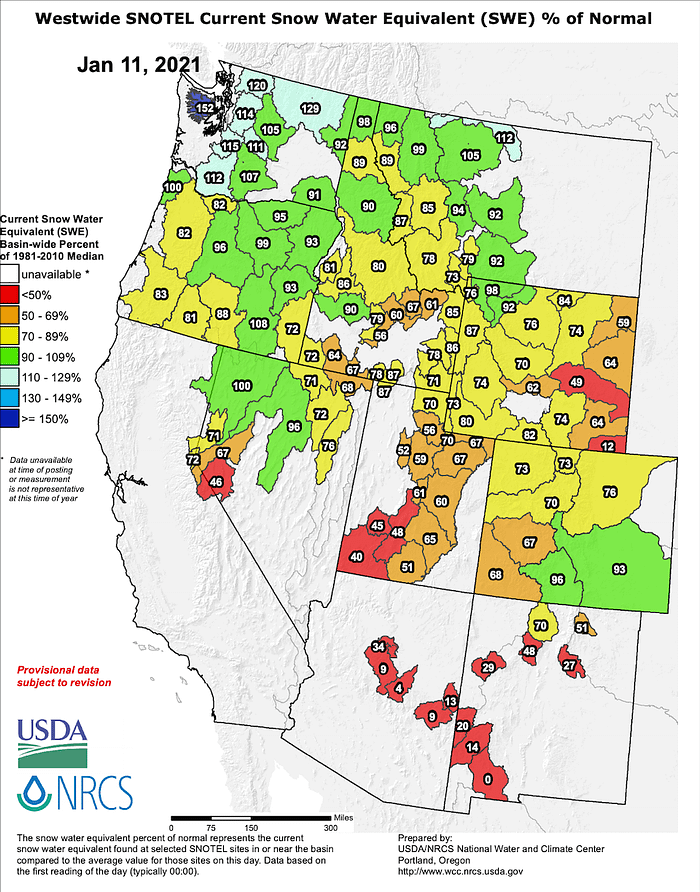 Looking for deep snow? Head to the Pacific Northwest, where in typical La Nina fashion, the Washington Cascades have been getting dumped on. British Columbia and Alberta are enjoying a great ski season so far as well, but of course, the border is closed.

Lone storm this week on Wednesday

In an otherwise dry pattern, we will see one storm this week on Wednesday as the southern extent of an atmospheric river (more informally known as a “Pineapple Express”) moves across Northwest Wyoming.

In addition to seeing a significant amount of Pacific moisture, we’ll also see a big warm-up with heavy wet snow in the Tetons and a rain/snow mix in the valley with temperatures rising into the upper 30s.

Not exactly the kind of storm we want to see, but the higher elevations will pick up 4-8 inches of snow so Wednesday afternoon could be a fun day on the slopes, despite the wetter “Sierra cement” snow quality.

After Wednesday’s storm, dry weather will return for almost another week aside from a couple of fringe-level snow chances on Friday night and Sunday.

The good news for snow enthusiasts (and for our water resources) is that a more active pattern is expected to take shape around January 20th as the ridge of high pressure responsible for our dry spell breaks down, and the pattern becomes conducive to stronger and more frequent storms.

Check out the pattern expected prior to this pattern change with high pressure in place.

Next, check out how much better the pattern looks beyond January 20, with a ridge of high pressure replaced by a trough of low pressure, which is much more conducive to storms arriving from the Pacific.

In other words, the final 10 days of January should offer much better snow potential following this mid-January dry spell.