JACKSON, Wyo. — The past weekend was unseasonably chilly, even by Jackson Hole standards. The temperature on Sunday morning, May 9 dipped to 12 degrees in Jackson, setting a new record low for the date.

A strong cold front arrived on Saturday morning following 70-degree temperatures on Friday. The cold airmass settled into place on Saturday, and clearing skies on Saturday night along with light winds allowed the temperature to plummet. The average low at this time of year is 30 degrees and the average high is 62 degrees.

A chilly spring so far, despite a lack of moisture

Last week, we discussed the lack of precipitation so far this spring and the resulting drought conditions along with summer fire danger concerns.

Interestingly enough, the persistent dry pattern has not been accompanied by above-average warmth as is often the case. Instead, temperatures have actually been running a bit below average so far this spring.

During March and April, temperatures in the Jackson Hole valley ended up being 2-3ºF below average during both months. 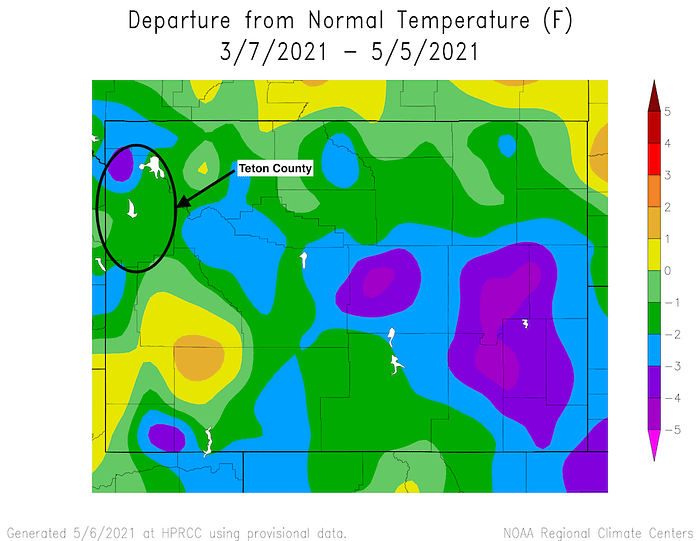 A northerly-flow dominated the weather pattern allowing cool Canadian air to spill in from the north, but high pressure off of the Pacific coast prevented Pacific moisture from reaching Western Wyoming.

Instead, storm systems ended up “cutting off” from the main jet stream as they tracked into the Rockies, resulting in easterly winds that favored areas along and east of the Continental Divide in Wyoming for higher precipitation totals.

Through the first nine days of May, temperatures have been running slightly above average (0.5-1.5ºF above average) in spite of the recent cool snap.

Temperatures will remain chilly to start the upcoming week, but a nice warm-up is expected during the second half of the week. While ups and downs are to be expected at this time of year, we are most likely (and hopefully) done with lows in the teens for the season.

Weather Pattern for the Week Ahead

Monday will continue the trend of cool and unsettled weather with high temperatures only in the 40s in the valley. An area of low pressure setting up over Idaho will also lead to rain and snow showers developing on Monday afternoon.

Snow levels will only rise to elevations slightly above the valley floor and at times will lower to the valley floor, though no accumulations are expected. The Teton Mountains and surrounding ranges could pick up a couple of inches of new snow. Also, don’t be shocked to hear a rumble of thunder on Monday afternoon as the atmosphere will be slightly unstable.

Prevailing winds out of the south on Monday afternoon will limit the shadowing effect of the Tetons, with both the Tetons and the Jackson Hole Valley receiving similar precipitation amounts.

Another disturbance will arrive from the northwest on Tuesday with scattered showers developing. Winds out of the west/northwest will create more of a shadowing effect with most of the shower activity confined to the Tetons, while the valley will see lighter and more isolated showers. Snow levels on Tuesday afternoon will rise to 7,500 feet.

We will finally break out of the cold pattern starting on Wednesday with highs in the low 60s in the valley, before rising into the upper 60s to near 70 on Thursday and Friday. This will be a nice time to get outdoors with sunny skies in the mornings giving way to cumulus cloud build-ups in the afternoons.

Some isolated shower activity could develop on any of these days, but any rain will be light and spotty. 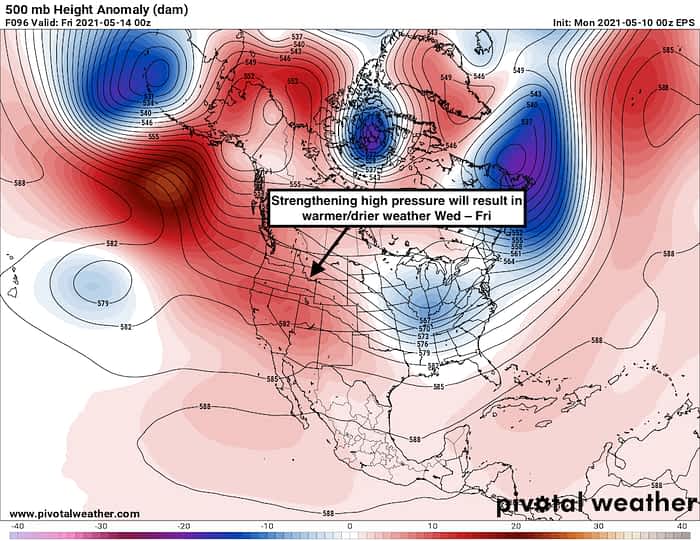 Over the weekend and into early next week, a more active pattern will develop with low pressure systems approaching from the Pacific. However, temperatures are not expected to cool off significantly, at least in comparison to the previous pattern. 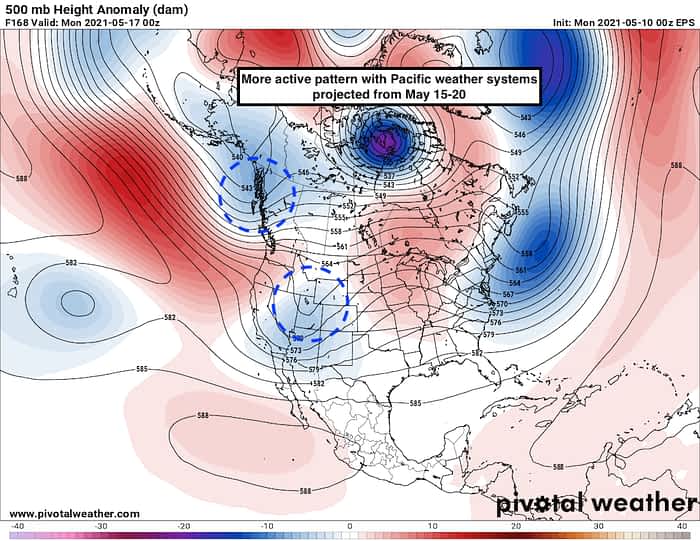 Expect to see an uptick in shower and thunderstorm chances starting Saturday and likely continuing through at least the first part of next week (through May 20 or so). It’s too early to say how much rain we might receive, but perhaps we’ll be able to pick up some needed moisture during this timeframe.