JACKSON, WY— Did you catch a glimpse of Guy Fieri around town this summer?

That’s because the chef and TV personality for the Food Network chose to feature Jackson’s own Pinky G’s in an episode of his newer show, Triple D Nation. Fieri has already featured Jackson’s favorite pizzeria and late-night spot in a past episode of Diners, Drive-ins and Dives. Triple D Nation is a newer version of the show, in which Fieri catches up with some of his favorite spots. 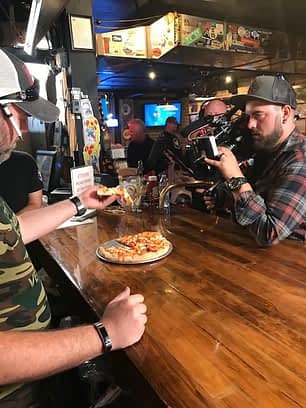 Fieri came into Pinky G’s earlier this summer with his camera crew in tow, and helped Fay choose the two new pizzas to add to the permanent menu. Starting TODAY, August 24, Guy’s versions of the new pies will be available.

The second is the Meatball Parm. This one features handmade meatballs, a red sauce base, mozzarella, and parmesan cheese. Baked to perfection and topped off with a drizzle of marinara sauce.

Both new pizzas will be available by the slice all day Friday.

Try both of these delicious new pizzas at Pinky G’s viewing party tonight at, August 24, at 7 p.m. They’ll playing the episode when it airs live. Celebrate with Fay and his crew! If you can’t make it, be sure to catch the episode at home on the Food Network.

Featuring a Full Bar with over 20 local and regional beers to choose from, Pinky G’s has something for everyone Try the popular $8 Lunch special; a huge slice of pizza, choice of fresh