JACKSON HOLE, WYO – The Jackson Broncs showed why many are predicting the team has a real shot at vying for a state championship this year after winning their home opener 38-32 last Friday.

Offensively, the Broncs won’t have to tinker with much as they moved the ball effectively on the ground and in the air. Head coach David Joyce said the team would pass more this season even with a weapon like 2018’s 3A West Offensive Player of the Year Jeydon Cox in the backfield. He wasn’t kidding.

Starting sophomore quarterback Sadler Smith threw a strike to fellow classman Nate Keipert off play-action for a 75-yard touchdown on the Broncs’ first play from scrimmage. It would be the first of many times the Broncs caught the Redskins keying on Cox, to their demise.

Jackson looked like the same team on offense that offered glimpses of brilliance last year. Joyce ran fewer wheel routes in the opener, sticking with Cox on the ground and play-action passes when Teton stacked the box to stop him.

Credit goes to the coaching staff who had the kids prepared to play this game with little practice time. Both Broncs QBs ran the no-huddle offense all night seamlessly, getting plays relayed in from the sidelines. Both teams played relatively penalty-free football during what was an enjoyable game to watch.

Cox finished the night off to another good start, with 200 yards on 25 carries. One wrinkle in the Broncs offense had the quarterback line up in a receiver spot with Cox taking a direct snap in the shotgun. The play fooled Teton twice for touchdowns until they identified #26 as the guy getting the snap.

The Broncs go as Cox goes but play at the quarterback position was stellar Friday night. Sadler Smith started and played the first half. He showed the big arm coaches are high on and was accurate all night and not afraid to throw deep. His one turnover was a forgivable interception on a bang-bang toss to his left setting up a slot receiver screen—a play read perfectly by Redskin defensive back Carson Reiley who stepped in front of the receiver for the pick.

Last year’s starter, Pearson Evans, also looked sharp calling the signals in the second half. Evans is the better runner between the two quarterbacks so Joyce had him running more option plays where Evans kept the ball after faking to Cox to keep Redskins defenders honest. Evans’s lone turnover was a costly fumble that gave the Redskins momentum in a late-game comeback.

Peter Goettler had a nice night on both sides of the ball. He caught a TD pass as WR and made a key interception in the second half for the Broncs. Kirby Castagno was mostly ineffective in his carries relieving Cox but he was the team’s big hitter on defense along with Colter Dawson. William Pew also came up with a few big stops for the Broncs.

The Broncs have a few things to work on before next Friday’s matchup with pushover Bear Lake.

First, this team needs to clean up the special teams play. Kick coverage was dreadful in the first half of Friday’s game. Short, low kicks gave no time for the coverage team to get downfield and allowed Teton’s Cooper Clarke a few big runbacks. Things got better in the second half for the Broncs but they also failed to cover an onside kick in the fourth quarter.

Putting opponents away is also something Joyce preaches and will have more fodder for this week. Teton was a pesky foe for sure. The Redskins never led but never let the Broncs run away and hide, either. They kept the score close in every quarter behind the exceptional play of senior QB Dusty Hess, whose rollouts to either side went for big yards by air and ground, and by junior running backs Spencer Kasbaum and Hyrum Heuseveldt—who both had big games.

Still, the Broncs let the Redskins back in this one, repeatedly. They have to develop a killer instinct if they’re to win the tough ones.

Jackson’s defense also needs some fine-tuning. Last year, the team was able to disguise the fact they were almost always outsized at the line of scrimmage. Technique and team speed helped the Broncs rally to the ball last year. That trademark swarm was less evident Friday night as the team looked a bit more tentative on defense.

The Broncs rarely took chances defensively, preferring to play it cautious, keep the play in front of them, and not get caught cheating or biting on fakes. It’s a good system for preventing the big play, but too many Redskins were able to get into the secondary with speed and make what should have been 4-yard gains into 14-yard gains.

Jackson has now won 5 of its last 6 games at home—their only loss at William T. McIntosh stadium was at the hands of the Star Valley Braves on October 5, 2018. The “Mac” might be getting to be a tough place to play for opponents. And that’s a good thing according to Coach Joyce. 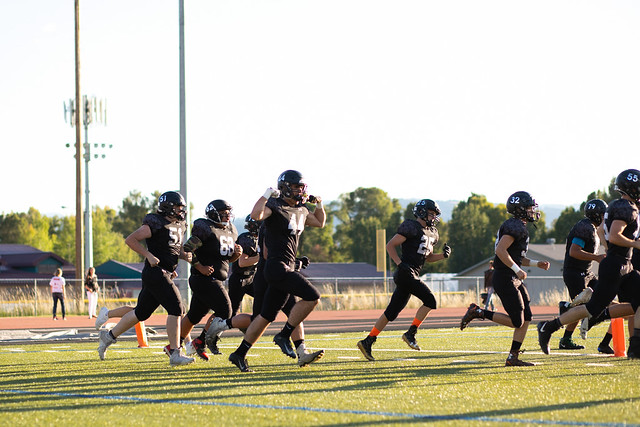 S’mores in the Plaza

Mardi Gras Party with the Jackson 6